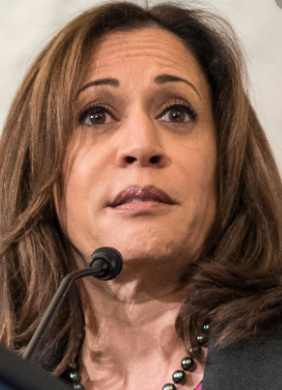 Senator Kamala Harris polled at 3% in last month’s Quinnipiac poll. That must make the San Fran and Hollywood donors who stuffed $11.6 million in her pantsuit pockets this quarter feel good about giving to charity.

A quarter of Iowa Democrat caucusgoers have a negative opinion of Harris. That’s up minus eleven points since June. So, Harris is making weekly trips to Iowa while claiming that she’s going to move there. Not even Democrats are stupid enough to believe that she’s going to leave her Brentwood mansion to move to a place where the temperatures are currently hovering around the low thirties.

And her Iowa stump speech is now all about accusing anyone who doesn’t vote for her of racism.

In her speeches, Harris claims that “electability”, the question of whether a candidate polling 3% nationwide can beat President Trump, is the “elephant in the room—but actually more accurately, the donkey in the room.”

There’s a donkey in the room all-right. Or maybe it’s a jackass.

“It’s been coming up in connection to my campaign: is America ready for that? Are they ready for a woman of color to be President of the United States?” Harris insists.

When Harris tried this line in an Axios on HBO interview, a baffled Margaret Talev asked, “America was ready for a black man to be President of the United States.”

But who are the sexist pigs who aren’t ready for a woman to be President of the United States?

Senator Harris polls at 5% among men and only 2% among women. Either women aren’t ready for a female president. Or women just don’t like Kamala.

And where’s the outpouring of support from black voters?

Maybe that 1% difference can be explained by racism?

But that doesn’t explain why 20% of black voters rate her unfavorably.

Maybe the 96% of black voters and 98% of women who aren’t backing Kamala just aren’t “ready for a woman of color to be President of the United States.”

Harris began her campaign ascendancy by accusing Joe Biden of racism. It’s only fitting that she’s wrapping it up by implying that her lack of support isn’t her fault, but the fault of an intolerant nation.

Electability, a problem caused by her own poor poll numbers, is really a sign of racial unreadiness.

In Iowa, Senator Harris claimed that the question of whether voters were ready for a “woman of color” is “a conversation that’s come up in every single time in every election that I’ve—now, here’s the operative word—won.”

Since Kamala raised $15 million and spent $14 million, while Sanchez had about $4 million, it was easy.

This time around, she raised over $36 million, and spent $25 million of it, to poll at 3%. But that’s after an initial surge of enthusiasm that saw her break fundraising records and make it to the first tier.

Trying to pretend that she’s polling at 3% because Obama voters aren’t ready to vote for black people, and women aren’t prepared to vote for women, and black people aren’t willing to vote for black people, is exactly the reason why even Democrats hate her. Voters have gotten tired of the lies, the flip-flopping, and the constant racial appeals as if she had come out of a ghetto in Detroit, Newark or Chicago, instead of being a privileged woman who grew up with her Indian scientist mother in Canada.

Kamala Harris bet her entire campaign on racial identity politics. She assumed that she could break off Joe Biden’s black support and combine that with white lefties yearning for another Obama.

None of her bets paid off. Nor did the bets of the donors who lost $36 million on her campaign.

Instead of laying out a vision, the former socialite relied on the personal charm that made her a hit among San Francisco’s wealthy lefties. But the transparent phoniness that won over her old social set hasn’t translated well to a national stage. And her constant transformations, pretending that she’s about to move to Iowa, and then complaining that Iowans are racist, just make it obvious how fake she is.

But no matter how badly Kamala fails, she can always blame it on racism.

This is a problem and it’s a bigger than Willie Brown’s former mistress playing her last race card. Kamala Harris blaming racism, instead of her bad decisions, means that she never has to take any responsibility. Instead, somehow, the entire country is to blame for not being “ready” for her historic candidacy.

That’s a disgusting smear of millions of people, Democrats, Republicans, men and women, white people and black people. It cynically uses race and gender to divide the country while obscuring the actual problems of racism. And it shields perpetrators of racial divisiveness like her from accountability.

Kamala Harris can never fail. Her failures are America’s failures. The worse she fails; the worse America must be. Instead of leaving the race having learned something, she stumbles to the exit, having learned nothing except that even if shameless racial huckstering can’t win a half-Indian politician from Brentwood the election, it can deflect attention from how she squandered her lead, alienated her voters, and wasted tens of millions of dollars of other people’s money to poll at 3%.

Out: QPQ. In: Extortion/Bribery. The Left’s Constantly Changing Narrative

Just a Common Soldier (A Soldier Died Today) By A. Lawrence Vaincourt