Since October 17, the Chicago Teachers Union has banished 361,000 students from their classrooms by going on strike to demand a $100,000 average salary for its members.

The union insisted that taxpayers, “stop short-changing the people who make our schools work”. 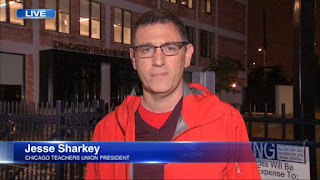 4 in 10 Chicago public school students don’t meet national reading standards. Or, as celebratory press releases declared, 61% of Chicago students actually met the national average. Math is obviously not a key skill of Chicago educators except when it comes to demanding obscene pay hikes.

A “record” 57% of Chicago students also met the national average in math.

Currently, Chicago teachers are living on starvation wages of $78,211 a year. The people responsible for that 57% “record” are shortchanged with a miserly starting salary of $52,958, a beggarly $82,630 10-year midcareer salary, and a $108,242 maximum salary that barely keeps them out of the poorhouse.

Hundreds of thousands of students are left on their own as their educators “fight for the students” by demanding a 15% raise in 3 years, while Chicago’s lefty mayor will only offer them 16% in 5 years.

And that’s not counting the annual cost-of-living increases which make it more like 25%.

Waiting 5 years for a $100,000 salary would “short-change” the people who make our schools fail.

67% of Chicago’s school budget already goes to salaries and benefits. Another 33% is left over for the other stuff. Guess where that $2.5 billion that the union is demanding will come from? Not the 67%.

“The fact is there is no more money,” Mayor Lori Lightfoot insisted. “Period.”

Nonsense. There’s always more money. All Chicago schools have to do is put out more junk bonds, borrow another $500 million, pay $70,000 in interest a day (that won’t even cover the average salary of a public school teacher), and add it to the $9 billion or so in debt that it’s already carrying.

That’ll help put a dent in the $850 million in pension contributions this year.

Better make sure that the number of students meeting math averages doesn’t pass 60% or the next generation of taxpayers might figure out what’s going on and run for their lives and their wallets.

CTU Vice President Stacy Davis Gates previously had lots of ideas for raising money. “Where will the money come from? Rich people.”

Ah, those rich people. They really are the answer to everything.

It’s not hard to see why Senator Elizabeth Warren, a rich person, turned up to a CTU protest.

Past tax returns showed that in 2017, a CTU VP had been earning $96,115 from the union. It’s doubtful that there have been salary reductions in the union since then. That would force the union’s management to go on strike against its membership. So, Gates is probably making six figures.

Is the money coming from her, a rich person? Nah, she has other ideas. Like gambling and drugs.

We’ll take the drug and gambling cash… for the children.

Gambling and drugs will be used to help pay the $100,000 salaries of teachers in a city that actually brags that a record 57% of the students met national averages in math. This is what full spectrum failure, moral, economic, educational, political, looks like in this progressive Pottersville.

In Chicago, there’s only one difference between organized crime and organized lefties. Many criminals won’t shake down gamblers and drug dealers for cash, and then steal the money from the children.

There’s a union for that.

Stacy Davis Gates will take the drug and gambling cash, but there are things she won’t take.

“Rich white men tell black women with children in the Chicago Public Schools what to do all the time,” she whined, after her name was misspelled in a note from the lawyer of the black female lesbian mayor.

Not only is Lori Lightfoot, Chicago’s mayor, a black woman, but so is Janice Jackson, the CEO of the public school system. But, even when the mayor is a black lesbian, the race card never expires.

In a city and a system run by black women, those “rich white men” keep pushing everybody around.

361,000 students were left without an education, and their parents, most of whom work and earn a lot less than the privileged teachers whining that they can’t live on $100,000, were left to cope with them.

Mayor Lightfoot insists that there’s no money, but that’s silly. There will be money. Rich white men will provide it too. At interest rates that only a Chicago public school graduate would find acceptable.

The Chicago Teachers Union will get its insane raises. More money will be borrowed at ruinous interest rates to pay for them. The pension cost will be incomprehensible and won’t actually be paid.

Enrollment in Chicago schools keeps dropping sharply even as the unions howl for more cash. CTU protesters claim that they’re striking for smaller class sizes, but they’re already getting them as the enrollment numbers fall by the thousands. The teachers are running out of students to exploit.

And that’s the real crisis.

Chicago can always borrow more money even if its bonds are rated below those of Puerto Rico, Somalia, and a burning pile of trash below an underpass that somehow talked J.P. Morgan into a bond issue.

But it can’t borrow more students.

Illegal aliens are doing their part. A sizable chunk of Chicago public school expenses is generated by students who don’t speak English. But why would your average illegal go to Chicago when he can stay in California? On a cold winter night, even hardened MS-13 gang members will shudder at the ‘lake effect’.

The Chicago Teachers Union is bulking up salaries and staff sizes for a huge influx of students that isn’t coming. If anything, the students are running the other way. And who can blame them?

The future of public education in Chicago is empty schools, $100K teacher salaries, and fake jobs.

Don’t worry. The “rich” will pay for it. And if that doesn’t work, there’s always gambling and drugs. They won’t pay for the $100,000 salaries, but that’s where plenty of those salaries will be going.