I was in the same room with the most powerful man in the world.  Let that sink in. Okay, it was an arena with over 14K of my closest, like-minded, conservative friends but I was still there.  An opportunity of a lifetime presented itself and I was able to take advantage of it thanks to my husband who said “let’s go”.

President Donald J. Trump, was in Bossier City, Louisiana, a short drive from where we live in Texarkana, Texas, so we got tickets on line, booked a hotel room and jumped in the car.  The weather was cold, traffic was backed up, the lines were long, everyone was orderly and respectful, security was tight, all the things you would expect when attending a rally headlined by the President of the United States.  We made new friends standing in line and ran into several people we already knew and it was delightful! 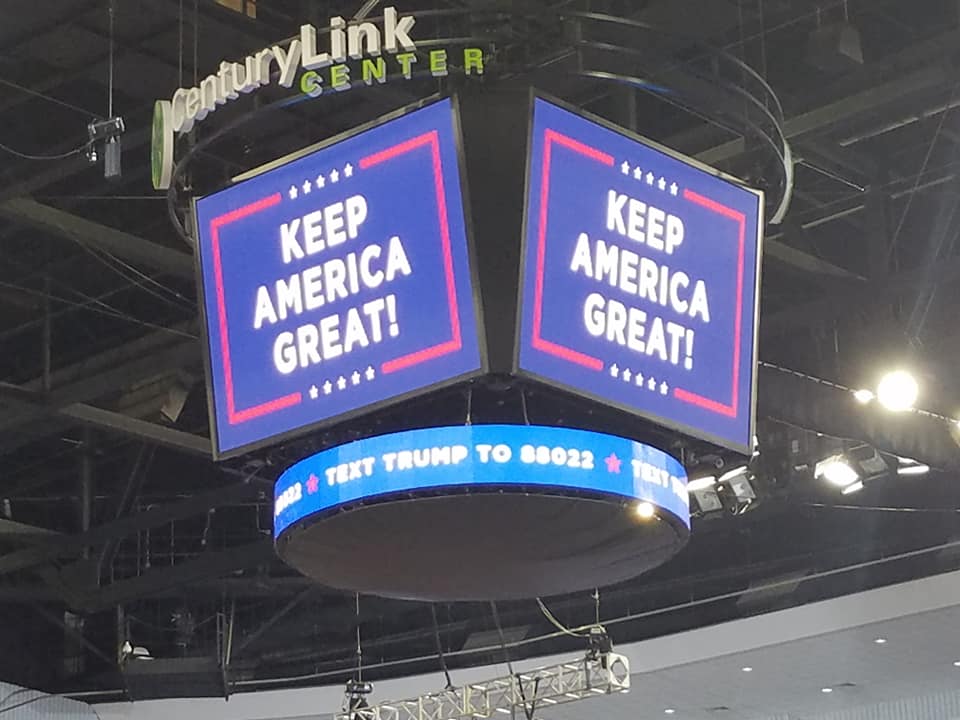 Trump hat, shirts, scarves, etc. were selling like hotcakes in the parking lot and inside the arena. I personally had friends texting me to buy them souvenirs while I was there and I was happy to oblige.  Music was playing and the atmosphere was festive. Several announcements were made over the very loud speaker system.  One particular announcement informed potential protesters of an area where they could peacefully assemble and informed the rest of us to not interact with protesters and to call Security if we encountered one.  General consensus to that was “yeah, right”.   I think they forgot they were in the south.  We don’t play that way.  But alas, no protesters showed up.  This is TRUMP Country!

I won’t waste your time with a blow by blow account of his speech.  If you have not already had the privilege of listening to it please take the time. He was there to campaign for Louisiana Republican Gubernatorial Candidate Eddie Rispone.  I DO want to talk about the ELECRICITY in the arena.  It felt a bit like John Travolta in the movie Grease… “I’ve got chills, they’re multiplying, and I’m losing control, cause the power, you’re supplying, it’s electrifying”.

The man has charisma, yet he is down to earth.  It is like listening to an old friend speak. No pretense.  No fancy words.  He simply presents the facts in a manner than can be understood by most anyone from 8 to 80.    It is a major part of his appeal, a down to earth billionaire that grassroots America relates to, and the fact that he is the best President since Ronald Reagan.

Did I mention that I was in the same room as the most powerful man in the world?