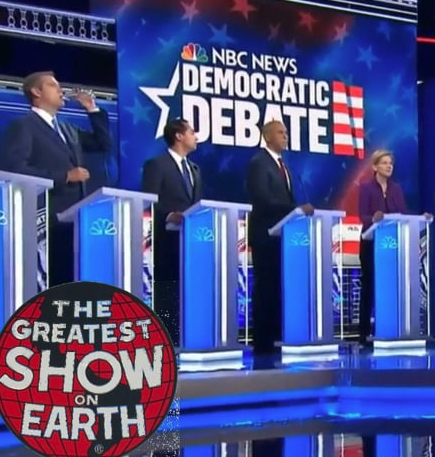 Webster’s defines the term “silly season,” as “a period marked by frivolous, outlandish, or illogical activity or behavior.”  It’s odd enough Webster’s has a definition for the idea, but to my way of thinking, it’s even more odd they don’t mention the U.S. presidential election as an example of the silly season.

I guess that makes sense when you consider the next presidential campaign starts hours after the election these days. Given non-stop presidential politics, it wouldn’t make sense to constrain the silliness to something as finite as a season.

In past years, it’s been easy to shrug off the idiocy by the candidates as being mostly isolated and occasional. No longer.

The silly season election of 2020 is increasingly dominated by a far left circling the wagons of insanity against any possibility of reason or logic.

Beto O’ Rourke, in a rant over guns he obviously knows nothing about said, “Hell yes we’re going to take your AR 15.” His audience, also apparently ignorant on the subject, gave O’Rourke a standing ovation.  In an unusual bow to reality, O’Rourke dropped out of the race recently due to poor fundraising and poorer polling.

Nevertheless, there’s a huge portion of the Democrat Party that evidently believes when the government knocks on the door of the bad guys, they’ll happily hand over their illegal weapons. Why? How can he and other Democrats believe criminals will do so when they haven’t already done so?

The Democrat candidates also want the power to jail and fine otherwise law-abiding citizens who refuse to give up their legally obtained weapons. Why in the world do Democrats believe anyone will be safer when they disarm the innocent?

But if you’re like me, the assault on the Second Amendment is only the tip of the iceberg.  The real problem is the rest of the iceberg.  Democrat disgust for our Constitution and the values it promotes hangs under and supports nearly every utterance they make.

Without exception, the wacky band of Democrat presidential candidates seems hell-bent on actually finishing what Barack Obama started – “fundamentally changing America” in ways most of us could never believe would ever really happen.

“Silly” isn’t really the right word after all. This election isn’t so much “frivolous, outlandish, or illogical” as it is terrifying. The changes Democrats advocate should make your hair stand on end.

If, on the other hand, you believe the government can run your life and spend your money better than you, then you ought to give every penny you can to the Democrat of your choice.  Chances are you have a serious problem and you’re gonna need that government health care sooner than you think.