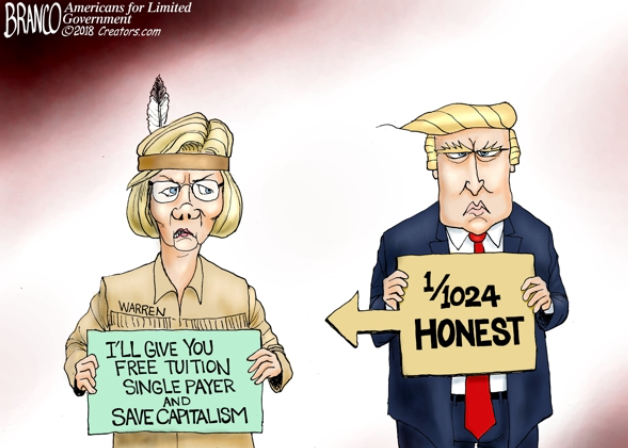 New poling from Iowa shows pretty clearly that Elizabeth Warren has pulled well ahead of Biden and Sanders to become the Democrat-socialist-progressive-left-wing nominee for President.

How has she done it?  The same way Julius Caesar and just about every despot since has done it.  By promising tons of government supplied benefits while denying the reality of any real cost.  In short, she’s offering free stuff in exchange for people’s votes.

We all know that Warren lied about being an American Indian in order to improve the odds she’d be hired by elite universities – and maybe even qualify to enter Harvard in the first place.  At the very least, it’s the same kind of lie for which some parents of otherwise unqualified college students are now being prosecuted and imprisoned.

Her “American Indian” lie though was only a precursor of bigger lies to come.

What makes her offer of free stuff for people’s votes the lies I contend they are?  It seems plain they come in both forms: lies of commission and omission.  Her lies of commission include things like, “yes, I’m an Indian;” or her other favorite, “only the rich will pay.”  Lies of omission mostly relate to her avoiding the truth about what her promises cost or where the money will really come from to pay for them.

You have to hand it to Bernie. At least he has the guts to admit everyone’s taxes will go up to pay for his socialist promises.

Warren has promised something for nothing to just about every subset of voters in America except straight whites.

Free medical care for all — including illegal immigrants. By free, I mean Americans who pay taxes would actually pay.  And what happens when the system runs out of money?  When new life-saving procedures and drugs aren’t invented?  When health care workers rebel against the stiff limits put on their now-government pay?  Here’s what happens: rationing of care, delaying treatments, help with suicide.

For the LGBT community, Warren promises reparations to cover the emotional and actual damages caused by a society that for centuries banned gay marriage.  Warren proposes taking from straight people, and giving to gays, the cash equivalent of tax benefits gays would have received had they been married.

Warren wants reparations for blacks as well.  This despite the fact that no American alive today ever owned a slave or suffered under slavery.  Still, if your great, great owned slaves, you should pay.

Then there’s college debt forgiveness for everyone who’s failed or refused to pay down their student loans.

And don’t forget the Green New Deal with its promises of guaranteed annual incomes, paid vacations, “affordable” housing, free energy, and so much more – all intended to upend the very economy she hopes will produce enough largesse to cover the costs for all her socialism.

Here’s what I don’t quite get. If it’s illegal to offer someone $200 for their vote–and it is–then why is it ok to offer huge groups of people hundreds of millions in free stuff for their votes? That’s what all the Democrats are doing, but Warren’s promises of free stuff are especially egregious because she claims it’s only the rich and powerful who will pay.

Reporters will ask voters who refuse to vote for Warren, “Why would you vote against your own self-interest?”  On the surface they have a point.  And Warren – along with all the other vote buying politicians on the ballot this year – are counting on getting the votes of Americans who want all the free stuff they’re promising.

I suspect Americans will surprise Democrats next election. Most Americans know the truth: The free stuff politicians promise isn’t free at all. If the socialists and progressives win, the cost will be lost opportunity, economic misery, and the end of personal freedom.

The Impeachment That Goes Around Will Come Around

The Impeachment (Without an Actual Crime) of Donald Trump