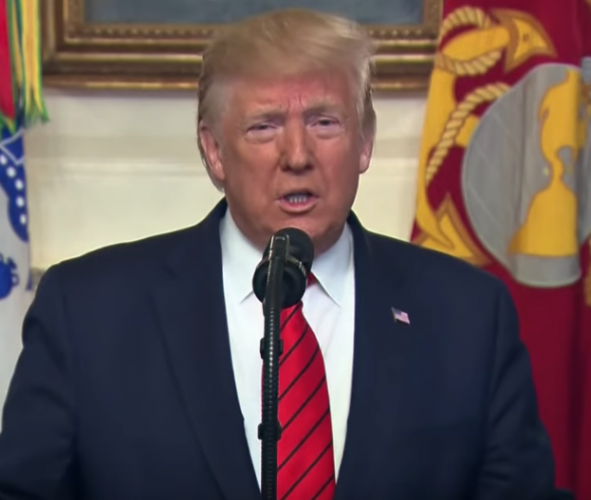 The left’s reaction to the killing of Abu Bakr al-Baghdadi is another demonstration of their total hypocrisy. Why it was just a couple of weeks ago that they were having a temper tantrum over the massive troop withdrawal from Syria (“massive” meaning less than 50 people). They said it would lead to a resurgence of ISIS. In reality it was smart strategy that lead to a major victory. And aren’t these the same people who during the Bush years said we should get out of Iraq and the Middle East? AS Bob Dylan once sang “The times they are-a changin’”.

After piling on Trump, events (as they often do) have played right into Trump’s favor, making them look like fools. They never seem to tire of playing that part. Over the weekend we found out that US forces had killed the ISIS mastermind. Trump even tweeted it live which was hilarious. He even included the nature of his death:

“Last night the United States brought the world’s number one terrorist leader to justice, Abu Bakr al-Baghdadi is dead. He was the founder and leader of ISIS, the most ruthless and violent terror organization anywhere in the world. He died after running into a dead-end tunnel, whimpering and crying and screaming all the way”.

The left reacted to this news in predictable ways:

First they attempted to minimize it (this from the AP):

“The killing of Abu Bakr al-Baghdadi by U.S. forces leaves the Islamic State without an obvious leader, a major setback. But the militant group, which arose from the remnants of al-Qaida in Iraq after that group’s defeat by U.S.-led forces in 2008, has ambitions to regenerate yet again. And it remains a dangerous threat in Iraq, Afghanistan and beyond.”

Yes because we cannot give Trump any credit for anything. Let’s back up a little here. Obama called ISIS (or ISIL as they were known then) a JV Squad. Before long that “squad” became a major threat. When Trump took office ISIS controlled a lot of land and oil. They essentially had their own country. But Trump has blown them to smithereens, something he promised to do in 2016. Of course they will still exist in a hugely reduced capacity but they are no longer the threat they were.

The left then attacked Trump’s personally to divert attention from its success. Hollywood had another hissy fit evidenced by their juvenile and nasty comments:

Jamie Lee Curtis: “He may have died a coward @realDonaldTrump but ALL living things suffer when they are blown up. Anyone who has experienced warfare, unlike yourself, would know that,” actress Jamie Lee Curtis said. “War is brutal. Dogs are brave, bold, loyal, loving and healing.”

So I presume JLC HAS experienced warfare. And he blew HIMSELF up you moron. Why are the terrorists themselves never held to account by the left for harming people and wrecking the environment? When ISIS had oil, did Al Gore hold a climate summit meeting with them to get them to move away from fossil fuels?

Bette Midler: “I hate to have even the tiniest empathy for the man, but Trump’s picture-posing smile looks like every girl’s face in every prom photo with a bad date”.

So Midler favors a terrorist over the President. That’s not really surprising. How sad is it that just the look on someone’s face triggers such a visceral reaction.

Sulu (aka George Takei): “The president speaks like I did coming right out of surgery. It’s clear we got Baghdadi despite this C-I-C, not because of him”.

Not sure what Sulu sounds like right out of surgery-and don’t want to. Maybe it’s like this. And I don’t know what C-I-C stands for, although I am sure it is some type of vulgar sexual reference. But I do know Takei is often disgusting in his speech.

Finally, the Democrats are upset that Trump didn’t notify them before taking action. Let me get this straight. The folks who are conducting a secret and clandestine impeachment inquiry are complaining that Trump isn’t including them in his circle on foreign policy. Waaa waaa waaa. Someone play the violin. These are the same people who tipped illegals about ICE Raids! And they think Trump is going to tell them??? \Maybe Trump just figured the whistle-blower would fill them in!

And I have to laugh at this statement: “The operation marks a significant foreign policy success for Trump, coming at one of the lowest points in his presidency as he is mired in impeachment proceedings and facing widespread Republican condemnation for his Syria policy.”

Uh, no. There are no impeachment proceedings. Just deranged Democrats (and Romney, oh sorry…Pierre Delecto) still trying to undo the results of the 2016 election. Pretty soon they’ll be trying to undo 2020 once Trump wins AGAIN. And it’s NEO-CONS opposed to Trump’s withdrawal. You know, the folks who like perpetual war that the left used to criticize. Anyone remember Cindy Sheehan? Trump has exposed their alliance with each other.

But I think the thing that most upsets them is that this victory makes Trump look competent and they look petty and small (which they are). It takes attention away from their “kindergarten impeachment” class. And they’re gonna hold their breath and stamp their feet until the spotlight is back on their anti-Trump tirades. I wouldn’t be at all surprised if they eventually use this as one of their reasons Trump must be impeached. They’ll say he’s some sort of dictator making decisions without them. Of course it never bothered them when Obama went around them.

Trump is winning all around. And no I am not tired of it.