Greta Thunberg is a 16-year old girl who has gained international attention for her climate activism.  She’s appeared on the cover of Time Magazine, spoken to the U.N. General Assembly, and was featured in a short documentary entitled “Make the World Greta Again.”

My contention is that Greta Thunberg is an abused child. 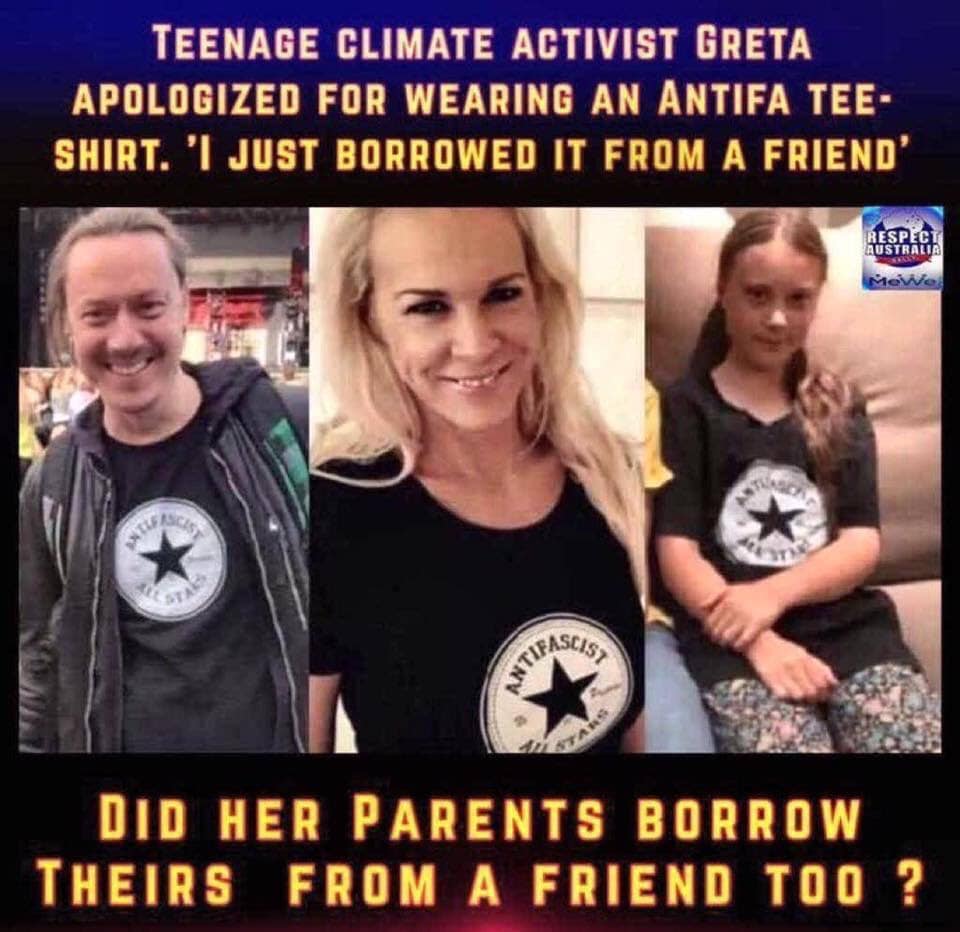 Her parents, her teachers, her mentors are all guilty of turning what was probably a lovely young lady into a snarling, mean, nasty child full of hate and contempt for everyone who does not agree with the brainwashing she’s received. Did you happen to see the look on the face of this Norwegian child when she first saw Donald Trump at the UN? If looks could kill … a child can only attain that level of hate for a person she doesn’t actually consider worthy of shared human dignity or personal value. Someone she’s never met or talked with. Someone she’s been trained to hate.

China’s Mao Tse Tung used brainwashed children to tell the rest of his people and the world how wonderful life was under his Communist regime. Stalin did the same. So did Hitler. In fact, the Nazis used programmed children to tell Polish Jews not to worry. We all know how that worked out.

In fact, Greta isn’t the only child to have addressed the U.N. As recently as 1992, a 12-year old girl named Severn Cullis-Suzuki “silenced the world” with her impassioned speech at the U.N. Earth Summit in Rio de Janeiro:

Make no mistake. Whether it’s Al Gore and his daily predictions for the past 15 years of imminent doom (none of which have ever come true) or the current brand of leftists, the common solution to fix our environment is the same: replace capitalism with a climate friendly socialist utopia.

Oh sure, they move to ban plastic straws, and charge a dime for each plastic bag, but in the end it’s all hocus pocus intended to frighten America into submitting to their globalization schemes.

Many on the left would like to see America subsumed into a one-world socialist confederacy of nations.  But they know that won’t happen so long as we enjoy the freedoms of speech, assembly, and religion. Or so long as we agree government should be subject to the will of the people, and not the other way around.  Or so long as we’re the number one power in the world.

Most of the world hates us for those things. Except, of course, for the millions who would like very much to become Americans and share in those things.

Bernie Sanders says Venezuelan socialism is not the model he wants to follow.  And yet nearly every big government nationalization scheme Hugo Chavez promoted when he came to power in Venezuela is something Bernie has proposed for America. His latest is a new national plan to control rents.

Greta Thunberg and the rest of the brainwashed climate radicals blame the United States almost entirely for the world’s environmental problems, despite America having made more progress in cutting carbon emissions than the rest of the world combined.  On a per capita basis the U.S. isn’t anywhere near the world’s biggest polluter. We’re number 88 out of 109.  Far ahead of us is China, India, Iran, Russia, and yep, Venezuela.

If she wanted to snarl at polluters, there are 87 countries, and 87 other national leaders, who deserve her hate more than Donald Trump. And maybe they’d get it if this was really a discussion about the environment.

But it’s NOT about the environment. For the far left it never has been. This is a conversation about how best to convince Americans we must sacrifice economic freedom for government control. We must turn from capitalism to socialism.

Enter the Democrat candidates for president in 2020, along with AOC’s cheerleading “squad.” They want a Green New Deal that promises radical action against climate change. But if you read it, you’ll see it has less to do with climate than with replacing free markets with government control over nearly every significant aspect of our lives.

First, the GND gives government control of our health care.  Who gets treatment and who doesn’t? How long you wait?  Who lives, who dies?

Bernie has even suggested abortion centers around the world to control population growth.

Then there’s energy production. They want to ban fossil fuels. And the one reliable source of absolutely clean energy – nuclear – is not even on the table. The biggest emphasis is on the least efficient, most expensive energy possible – windmills and solar panels.

And most people can forget owning their own cars. In the left’s vision, the only people who get their own vehicles are those they choose.  The rest of us get to crowd on buses and trains.  Those who run the government get the planes, and luxury vehicles.

Fuel for heating our homes, offices, and meeting places is also rationed.  Even the indoctrination centers where we all learn how much happier we should be now that the government is taking such good care of us will be cold and uncomfortable. Or maybe as the master manipulators they are, the re-education camps will be the only places most of us go that aren’t cold and uncomfortable.

Also important to the climate activists is dis-arming Americans. There won’t be buyback programs because there won’t be money enough. Besides, why pay for something when you can take it? Once we’re disarmed, there’ll be no chance we can defend ourselves, much less fight back.

They also have their own brand of school choice. But with their system, government bureaucrats get the choice where little Billy or Sally can best serve.

And just from what we know so far, paying for the GND will require everyone in America to pay 100% of any income above $60,000.  That’s it, $60K is all you’ll be allowed to make.  Unless, of course, you’re one of those who is running things.

If you think this is just some Twilight Zone installment, you need to read the Green New Deal, and that was only their opening proposal. Do you really think the leftist politicians can or will constrain themselves to limit government once they achieve their first set of goals? Just listen to Bernie and Warren. They’re already raising the ante.  Nationalize energy production, confiscate assets, ban meat.

WAKE UP… If the Democrats win, Greta Thunberg will be far from alone when it comes to socialist abuse.  We’ll all be victimized by radials who want to take our freedom, tell us what to believe, and put themselves in charge.

Our President Is a Real Fox

The Impeachment That Goes Around Will Come Around