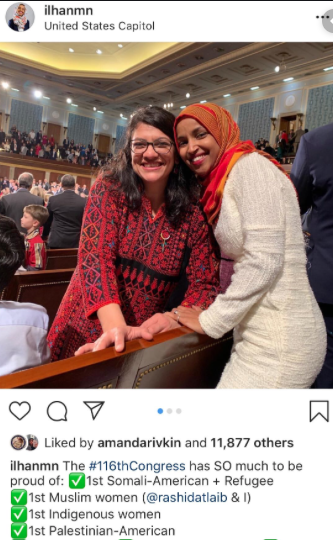 With the successful Congressional elections of two Muslim women; Rashida Tlaib (D-MI) and Ilhan Omar (D-MN), and the enormous amount of attention they’ve received, it shouldn’t surprise anyone that more Muslims are planning to run in 2020.

From city councils and school boards to state legislatures and Congress, historic numbers of Muslims have been emboldened to seek public office.  The overwhelming majority of those candidates share Tlaib’s and Omar’s anti-Semitic and anti-American views.

They are almost all Democrats, and it seems clear they’re not really traditional Muslims so much as a new hybrid of Muslim-Socialist. Almost every one of them supports government run health care, relaxed border security, guaranteed annual income, a ban on new oil and gas development, and a whole host of other left wing ideas.

We should also be concerned about the world-wide movement to make Sharia law the official law in Muslim communities within western Judeo-Christian societies.  At least some of the new Muslim-Socialist hybrids also support Sharia law.  It’s not so hard to understand when you consider their aim is not so much about promoting Islam as it is about undermining American society.

They seem to want Sharia law to exist as a parallel system that supercedes a nation’s law as it applies to Muslims. With such a system, Muslims who violated American law could claim discrimination.  Contractual agreements between Muslims and non-Muslims could be invalidated. Muslims who borrow money or buy products from banks and companies owned by non-Muslims could sue in Muslim courts.  Such a parallel system of laws and courts would go a long way toward diminishing our values and damaging our society.

And mark my words, some moronic liberal judge will grant their right to do so.

Mostly, Muslims don’t assault and rob one another.  To those inclined to crime, however, such restraint isn’t necessarily applied to non-Muslims.   In downtown Minneapolis, over twenty non-Muslims were recently robbed and beaten by Muslim thugs.  And yet the Muslim-Socialist hybrid candidates almost universally support restrictions on the right of law-abiding citizens to own guns.

Sharia law opposes the U.S. Constitution in a number of instances, though not always. The socialist humanist philosophy of the Muslim-Socialist hybrids, on the other hand,  is nearly diametrically opposed to the Constitution in every instance. Equal rights for all people is a universal value in the U.S.  Not so in much of the Muslim or socialist worlds.  Likewise for the value of personal dignity and individual rights. In Islam, such values are pretty much subject to rules set by religious leaders.  In secular socialist societies, those values are subsumed by the state.

In Muslim societies, women’s rights are often limited.  In some Muslim countries, women must dress in what can generously be described as a Hefty bag.  Often, they must be accompanied in public by a man, and must walk several paces behind. In some Islamic societies girls are not allowed to attend school, women are not allowed to drive.  Their male guardians must approve relationships and marriage.  The Muslim impulses of the new hybrid politicians are tempered substantially by their leftist socialist ideology.  Still, the impulse should be considered.

In socialist societies, whole groups of people live with limited rights — especially those who refuse to support the state and its leaders.  Consider Cuba, Venezuela, and China where large numbers of the population are oppressed.

While women in Muslim societies have limited rights, gays have none.  They’re thrown off the tops of buildings. The new brand of Muslim-Socialists are more open to supporting LGBTQ, though given the persecution gays face in socialist societies like Cuba and China one wonders if it isn’t a ploy to further divide and confuse Americans about their ultimate goals.

Believing that America was founded on oppression and continues to impose itself on the rest of the world, the two new Muslim-Socialist hybrids in Congress have little respect for our laws, our history, and our culture.

It’s why they support open borders. They want more Muslims moving to the U.S. so they win more elections and gain greater influence.

Sadly, they seem to be succeeding. The liberal media sides with Omar and Tlaib about 99% of the time.  Nancy Pelosi and other House Democrats allow their regular anti-Semitic comments. Their violations of finance, immigration, and ethical rules go unchecked.

Despite their clear conflicts and lack of knowledge about our history and economics they serve on key committees that require an understanding of both.

I’m not saying Muslim candidates are bad. I’m sure there are many fine conservative Muslims who have rejected the Sharia of radical Islam. They love America and value their freedom and our free market system.

But the new Muslim-Socialist hybrid candidates hate America and our values.  We’ve already elected far too many politicians who pledged to defend a Constitution they hate and are working to tear down.

Freedom is a tenacious thing.  But freedom is not guaranteed, it may be shaved and peeled in small increments until eventually it’s not freedom at all.   This election may take us well down that path if we’re not vigilant to oppose those intent on destroying it.  The Muslim-Socialist Democrats running for office this year are bad news. But then so are the rest of the socialist Democrats running for public office.  None deserve our votes.

Prager University: "All I Want to Do Is Make Cookies"