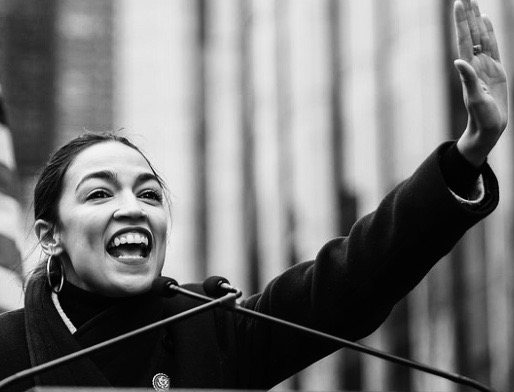 Yes there is climate change. It’s been with us since, well, since there’s been climate.  Sometimes it changes for the better and sometimes for the worse.

The real question is what can we do about it that will actually make a difference? The truth is probably not as much as the left would like us to believe. That’s largely because we’re a small part of the problem compared to polluters like China, India, South America, Africa, Asia, and Russia.

The inability to single handedly solve the climate problem causes a kind of mania among those who insist we just “do something.” They fall for any line, any provocation, no matter how outrageous.

AOC is like that. You can almost forgive the woman who ambushed AOC at a town hall recently to highlight AOC’s climate mania by suggesting that to “save the planet” we should “eat the children.”

The woman was apparently an activist from a fringe political group, the Lyndon LaRouch PAC.  They deny climate change.

But AOC didn’t know that. For all she knew the woman was serious. AOC’s response was tepid at best.  She didn’t call 911 to have the woman examined for a mental disorder. She didn’t condemn the woman’s suggestion, not really.

The hyper-hysteria of the climate left is only one of three huge obstacles they face to building public support for climate remedies.

The second obstacle they’ve erected is a certain double mindedness that insists the real cause of climate change is capitalism and the only solution is socialism. Befitting their manic hysteria, it’s a proposal entirely untethered from reality, and demands they reject all scientific and historical evidence that proves exactly the reverse.

The fact is that the United States has done more in the past two decades to reduce our carbon footprint than the rest of the world combined.  We’ve done it less by government mandate, and far more by the marriage of innovation and self interest.  Only capitalism makes such a marriage possible.  Only individuals operating in a system of creative free markets can conceive a phone as also a clock, a camera, an address book, a music player, and a video streamer.  Only capitalism turns that concept into reality while reducing costs and using far fewer resources than would otherwise be needed were each product produced separately.  Andrew McAffee makes this point and many brilliant others in his recent book, “More for Less.”

Want real solutions to climate change? Capitalism is already helping find them. And once the market demands better solutions faster, capitalism will bring them.

Clear evidence also proves that a society’s climate sensitivity only starts once it gains a certain measure of economic security. It’s hard to care about carbon emissions when you’re trying to find food for your children.  But only capitalism has proven it can lift entire populations from poverty to prosperity.  By caring for their immediate well being, capitalism frees people to consider their future well being.

The third obstacle to building popular support for solutions is the hypocrisy of the climate left. To illustrate, allow me an example close to home.

The state of Connecticut was once a beautiful state; parts of it still are, but the environmentalist-left are doing their best to turn Connecticut into a third world dung hole.

During the past few years, 5 wind turbines have been built along the Long Island Sound – the body of water that separates the north shore of Long Island from coastal Connecticut. The beaches are rocky, but they’re beautiful places to walk, jog, have a picnic or just sit and watch the boats.

Well, take a picture folks because what was once beautiful is about to turn ugly. New York and Connecticut are planning a massive wind farm off the coast of Long Island that will be clearly visible to anyone along the shore of Connecticut.

Not only are the climate maniacs insisting we make ugly what was once beautiful, they’re doing it here because their wealthy supporters won’t tolerate it in their own backyard.

You’ve heard about the Hamptons on Long Island? These are the towns on the south facing shore of Long Island where the rich and famous party and play during the summer months.

The wind farm was originally supposed to be built off the coast near the Hamptons. But homeowners there opposed the plan, and used their considerable influence with liberal politicians to move the wind farms where the middle class will have to look at them.  The wealthy liberals in the Hamptons get the energy without it hurting their property vales; and the middle class gets the eye sore.

That’s exactly how socialism works. The elite tell the little people where to live, what can or cannot be built next to their homes, what to eat, where to work, what health care they get, and how much education they receive.

The people on the Connecticut coast are already experiencing the socialist impulses of the green new maniacs.  If one of them wins the White House, you will experience it too.