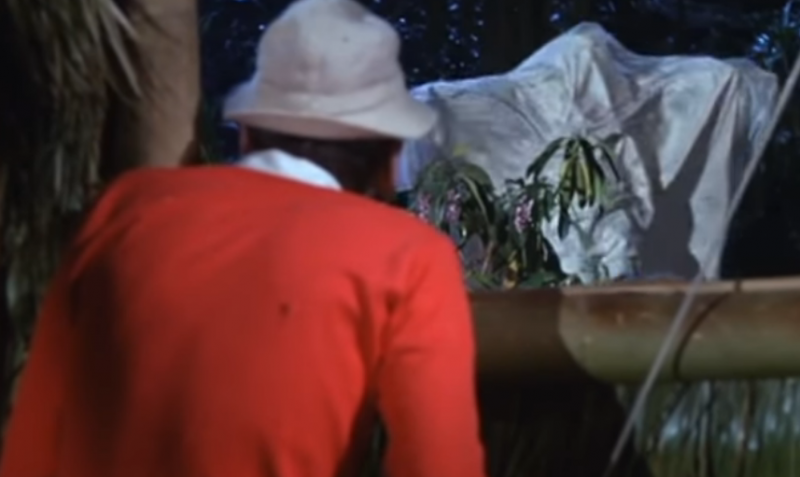 As the Halloween season is upon us again, I begin thinking about some of my favorite Halloween themed episodes of classic television shows. Below are some that I will be watching again this week.

Gilligan’s Island – “Ghost-A-Go-Go”. The castaways are victims of an attempt to scare them off the island by a “ghost” who is really trying to secure off-shore drilling rights. He provides a boat for their rescue but the wily Professor sees it as a trap and sends the boat out with “dummy” figures aboard. When it explodes, the Skipper and crew dress as ghosts themselves and scare the real “ghost” off the island. The best scene is when Gilligan goes to get water to revive the Skipper after he sees the ghosts and faints. When Gilligan arrives with the water, the Skipper has revived and it sitting up. Gilligan still pours the water on him anyway! “THANKS A LOT GILLIGAN”.

This episode was one of my daughter’s favorites and she mentioned it to Bob Denver when she met him at 4 years old.

Newhart – “Take me to your Loudon”. One of the funniest Newhart episodes. Dick reluctantly agrees to a Halloween Costume Party at The Stratford Inn after heavy persuasion from George, Stephanie and his wife Joanna. George assures Dick he has everything covered:

George: “Dick this is going to be a party you’ll never forget. I’ve recorded scary sounds, there’s going to be costume judging. And are you ready for this: Apple Bobbing.”

Dick: “It’ll be a real night of terror”.

Stephanie (as Cinderella) has the best line of the episode: “I hope you all notice I’m dressed as someone you have to bow down to”.

A hilarious adventure complete with tales of “strange lights in the sky” (over the airport) and “truck-like noises coming from the freeway”. Michael revels in the panicky atmosphere similar to “War of the Worlds”. It culminates with an appearance by the “aliens” (Larry, Darryl and Darryl) that received not only laughs but loud cheers from the audience.

The Andy Griffith Show – “The Haunted House”. Opie and his friend accidentally hit a baseball into the old Rimshaw House which is believed to be haunted (Old Man Rimshaw apparently did away with his hired hand – with an ax! Shazam!). Andy sends Barney (accompanied by Gomer) to retrieve the ball but they hear “ghost” sounds coming from within (which “didn’t sound like no baseball”) and run away faster than the young boys.

Barney: “We don’t know everything Andy. There’s pretty going on right now in the Twilight Zone that we don’t know anything about and I think we ought to stay clear!”

Andy: “Wasn’t it you that said ‘There’s nothing to fear but fear itself'”?

Barney: “Well that’s exactly what I got. Fear itself”.

Andy takes Barney and Gomer back to the house and discovers that it is being used as a still.

Star Trek – “Catspaw”. The Enterprise is placed under a curse by the two inhabitants of what can only be described as the “halloween” planet. Sulu and Scotty are turned into zombies while Kirk battles a cat woman. The best dialogue is the warning from the 3 witches:

WITCH 3: Captain Kirk! (just to make sure he knows they are talking to HIM).

KIRK: Who are you?

WITCH 3: Go back! Remember the curse!

And while in the dungeon chained next to skeletons, Kirk has second thoughts about calling Dr. McCoy “Bones”.

Star Trek – “Wolf in the fold”. Scotty appears to be the only possible suspect when 3 women are knifed to death. But using the resources of the Enterprise, Kirk discovers that an ancient terror is responsible.

This is a stellar episode. The theory proposed that Jack the Ripper was a non-human entity that inhabits/possesses human males to kill women is intriguing (similar to the movie “Fallen”).

There were two very chilling moments in the episode. First Scotty describing what happened during the seance:

SCOTT: “We were holding hands. When the lights went out, the circle was broken. I heard the poor lady scream, and as I was near the head of the table anyway I went toward her. But there was something in my way.”

KIRK: “Something? You mean someone.”

SCOTT: “No, Captain, some THING. Cold, it was, like a stinking draught out of a slaughterhouse, but it wasn’t really there.”

And Kirk’s statement that “when mankind moved into space, that thing must have moved with them”.

Of course seeing the man who was the voice of “Winnie the Pooh” (John Fiedler) yelling “Die, die, die everybody die. Kill, kill, kill you all” is a bit unnerving!

Hat tip: if you ever find yourself in a similar situation where a non-corporal entity has taken over your computer, just have it compute to the last digit the value of pi. That’ll drive that demon right out! 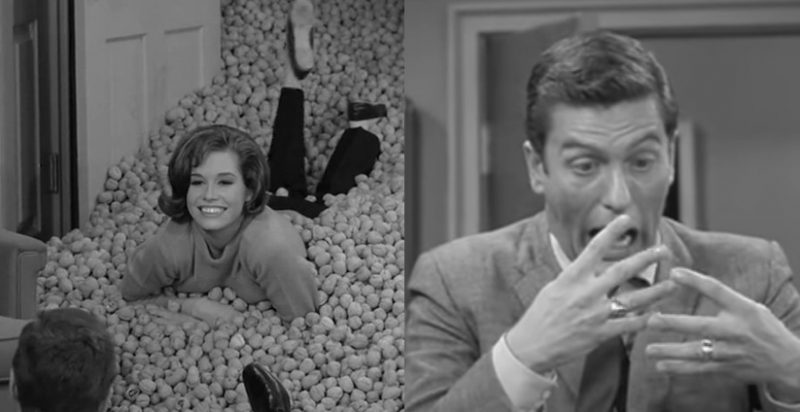 The Dick Van Dyke Show – “It may look like a walnut”. After watching a scary late night movie, Rob has a nightmare where the movie becomes reality. The alien Kolak from the planet Twilo (none other that Danny Thomas himself!) comes to earth and begins to take over. His weapon: a walnut! Anyone who opens the devilish object loses their imagination – and their thumbs! Oh, and they grow eyes in the back of their heads, which explains Kolak’s “20-20-20-20 vision”. Rob is convinced it’s a dream. He even calls Laura to check and see if he is still in bed sleeping.

Laura (speaking in an English accent): “Honey, I don’t have time for jokes. I have a walnut roast in the oven”.

Rob: “Alright, alright. You win. You and your friends have scared the pants off me, I admit it”.

Laura: “Have you still got your thumbs”?

Rob: “Yes I have. I guess there’s not much you can do about that, is there?”

Rob races home only to be greeted by Laura cascading down a mound of walnuts and showing Rob the eyes in the back of her head (“DON’T TOUCH MY EYES!”). When he finally awakes, he finds Laura has also had a nightmare. The show ends as he and Laura watch an exercise show.

Bonanza – “Twilight Town”. This was Bonanza’s tribute to the Twilight Zone. Little Joe is attacked by marauders in the desert and left for dead. He stumbles into a friendly town named Martinville where the citizens nurse him back to health. They even make Little Joe the sheriff. When the rest of the Cartwright gang arrive however, they discover a ghost town. Little Joe has hallucinated the whole thing. Or has he? Just as they begin to ride off, Little Joe sees a young girl who was one of the townsfolk and pulls the sheriff badge out of his pocket. Cue the Twilight Zone music.

The Incredible Hulk – “Equinox”. David Banner is a hired hand at mansion on a private island. When the mistress of the house throws a costume party, Jack McGhee arrives, searching for the the man who becomes the Hulk. This is an intense episode and one in which McGhee comes oh so close to capturing David Banner – twice! Both times he manages to escape and in the process transforms into the Hulk. One of these results in the Hulk crashing the costume party and being mistaken for a participant! A great episode!

The Twilight Zone – “Night Call”. After a bad storm, an elderly woman gets phone calls during the night. At first no one says anything then later just says “hello” several times each call (that part sends chill bumps up my spine). She asks the phone company to trace the line and they discover that it is a line that has fallen in a graveyard! She and her housekeeper are incredulous and go to check it out for themselves. They are shocked to discover that the line had fallen right on her long deceased fiancé’s grave! A chilling TZ for sure.

I’ll close with another Newhart episode, this one called “The Stratford Horror Picture Show”. The Tates, former owners of the Stratford, attempt to scare the Loudons into selling the hotel back to them. Using hidden walkways, they cause books to fall, shutters to bang and weird noises to be heard. They claim that the ghost of the witch Sarah (buried in the basement) is haunting the inn.

Joanna: “Why would she start acting up now”?

Ned Tate: “Who knows. Any little thing could set her off. I mean, she was hanged as a witch. I don’t think she died in the best of moods”.

But Larry, Darryl and Darryl have the solution to the haunting: 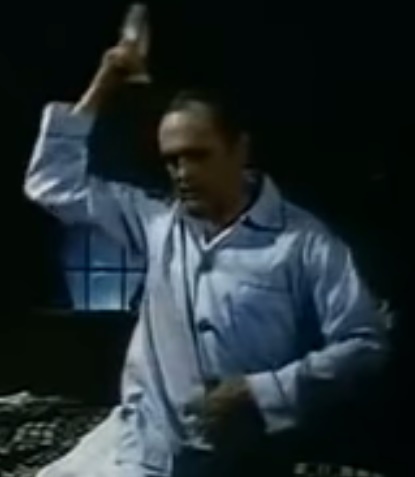 Larry: “You just circulate it over your head while standing on your left foot, rubbing your tummy and saying ‘Get Spook, Get Spook’. It will not only rid you of any paranormal pranksters, but it also promotes regularity”.

The hero of the story is Stephanie, who confronts the “witch” when she appears (which is actually Mrs. Tate):

“That witch has put the last line on my face….Hey, it’s real. And this fabric is cheap”.

Another fun Newhart episode. They had great writers on that show.

What are you your favorite Halloween episodes?

When Migrants Scream "Allahu Akbar!" (What Could Possibly Go Wrong?)