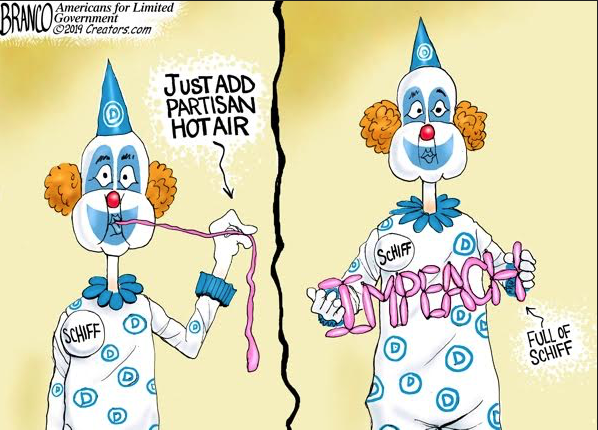 “Don’t you love farce?
My fault I fear
I thought you’d want what I want..
Sorry my dear
But where are the clowns
Send in the clowns
Don’t bother their here”-
Stephen Sondheim, Send in the Clowns

“Will the Clown Committee please come to order,” Clown Judiciary Committee Chairman Jerrold Nadler seemed to say that recently to the American people. The clown analogy fits Nadler as he is patently ridiculous.  So is Clown House Speaker, Nancy Pelosi and that blind-to-the-truth Oversight Chairman, Clown Adam Schiff.  Welcome to the continuing saga of Clown World, sponsored by the Democrat Party, paid for by the American taxpayer.

Before we satirically discuss the most recent farces, fabrication and hearsay of Washington, let us historically explain the Impeachment process in the United States Government.

As America citizens we should always know our history and embrace its attendant, freedom.

Here are some key points. First, we need to understand as citizens that the impeachment process was established by the United States Constitution. Secondly, the impeachment process must be initiated in the House of Representatives with the passage of a resolution listing the charges or the “Articles of Impeachment” against the official being impeached.

Thirdly, if passed by the House, the Articles of Impeachment are considered by the Senate.  This takes place in the form of trial presided over by the Chief Justice of the Supreme Court with 100 Senators serving as a jury.

Lastly, if the Senate votes for conviction by a 2/3 supermajority vote (67 votes), the Senate will then vote to remove the official from office.

Now the impeachment process can be applied to the President, the Vice President and all civil officers of the United States.  They can be impeached and removed from office if convicted of treason, bribery or high crimes and misdemeanors.

What is missing from the current national dialogue regarding President Trump is the Constitutional process established by our forefathers.

Instead what we have is another segment of Washington Clown World as covered by the Clown media.

Clown World, where President Trump’s Former Campaign Manager, Corey Lewandowski, is subjected to yet another repackaging of the Mueller Report by Clown Judiciary Chairman Nadler. A chorus of Crickets followed the September 17thhearing.  When you spend 40 million dollars on a meatless burger like the Muller Report, you cannot repackage the report as a steak to be resold to the American people.

To paraphrase a repeated statement, the Democrat Clowns in Congress hate President Trump far more than they love this country.  Their lack of respect for the Rule of Law is the typical behavior of the Democrat Party. They cannot win in 2020 on merit or ideas, therefore they bring out the process of impeachment again. They are like some poorly received performer desperately seeking an encore .

House Speaker Clown Pelosi has bowed down, yet again, to the Four Horsewomen of the Clown Apocalypse, Clown Cortez, Clown Tlaib, Clown Omar and Clown Pressley, and has started an “impeachment inquiry.”

Where is the Constitutional process, Nancy?  Where are your votes? What are the substantive charges?  Where are the “High Crimes and Misdemeanors.”

I read the released transcript of the conversation between Ukraine President Zelenskyy and President Trump. I fail to see any harassment of Clown Candidate Biden.  What it appears to be is two leaders having an honest discussion about the draining of the swamp of corruption of their own countries.  By my perception, what we have is a conspiracy of corruption created by clowns, disguised as leaders. The whistleblower accusation is seeming more and more like a Congressional Clown class project.

Perhaps Adam Schiff, needs to understand that you read what is in front of you or state in the process that you are “paraphrasing.”  This refers to Schiff’s “reading” of part of the  transcript in question.  Schiff, you do not backpedal afterwards and state that you were merely “parodying” the President.  Clown Schiff thinks his slithery lies will be believed just like the fake Russian Collusion hoax the Democrats and their lap dog media promoted for almost three years.

I find that I grow more offended by the day that our tax dollars fund this nonstop harassment of President Trump because of a Democrat’s refusal to accept they lost the election in 2016.

In plain terms, we have elected leaders that have decided to enact treason in the place of a political or constitutional process.  It is time for Congress to investigate real crimes.   Which leads to a litany of questions on my part:

Why have we not investigated former Vice President Biden’s alleged strong arming of a Foreign Leader to the benefit of his son?  That is the real quid pro quo story.

Why have we not investigated the real Russian Collusion stories?  Who paid for the fake dossier that is the basis of the meatless Mueller Report?  My research leads me to believe that the DNC, Hillary Clinton and domestic and foreign intelligence agencies created this dossier.

Why has Congress not investigated the alleged profits earned by Barack Obama and Hillary Clinton in the Russian Uranium One Deal?

Why has Hillary Clinton not been properly investigated for thousands of alleged violations of the Federal Records Keeping Act with her private e-mail server?  Believe me America, if you were found guilty of one of these violations, you would be facing substantial legal troubles.

Why were the many crimes of President Obama not ever investigated in even the most basic manner by Congress?

It is becoming more clear that we have a two tier justice system where Democrats are above the law. It is ironic that everything Adam Schiff described is exactly what the Obama administration is guilty of.

Constitutional process must be practiced by the principles established by our forefathers and the Constitution.  An impeachment process cannot be framed by suggestion and innuendo, it must be investigated under the Rule of Law.

Not so “Civil Officers” as Pelosi and Schiff need to realize that they too can be subject to the Articles of Impeachment.  All involved in the perpetuation of these false allegations and attempted coup against President Trump may very well be guilty of treason.  This treasonous behavior places our national security at risk.

It is time to stop this constant harassment of President Trump and send OUT the clowns.

Barry Shaw: The “Impeach Trump” Derangement Could Lead to Something Much Worse