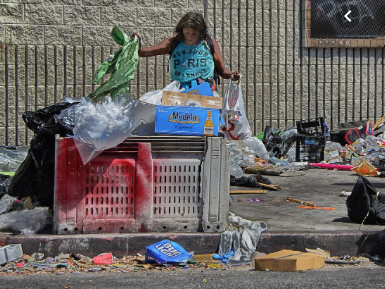 For nearly 175 years the phrase, “Go West young man, go West” was a rallying cry for Americans – and immigrants to America – who were looking for a better life for themselves and their families. Nowhere was that promise more real than in the Golden State of California.

From fields rich with gold, oil, and crops to the glitter of Hollywood, and the bloom of modern manufacturing; those who made their way to California often realized the American Dream — whatever that dream looked like to them.  Even in recent years, as people around the world witnessed the beautiful weather and wonderful lifestyle pictured every January 1st during the Rose Bowl in Pasadena, the more adventurous would pick up and head out escaping the dreary winters and sometimes dreary lives in their own regions.  The grass is always greener somewhere.  For more than a century, it really was greener in California.

But somewhere over the last couple of decades, all that started to change.  Today, more than 30 countries around the world warn their citizens to avoid traveling to California.  They cite safety and health hazards due to the enormous and growing homeless population, the intravenous needles that litter sidewalks, and the violent members of drug and trafficking cartels who cross the border with ease.  On yeah, then there’s the massive rodent problem that has caused a resurgence of diseases we once thought annihilated; diseases like typhus, leprosy, and tuberculosis.

I lived in California for a large part of my life.  But once liberals decided to make it a laboratory for far left policies, I’d had enough.

I was an early adopter of outward migration. Since then a lot of people have joined me.  In fact, not counting illegal immigrants pouring across California’s southern border, there are about 40,000 more people leaving each year than moving in.

It’s not hard to imagine why. Taxes have reached wallet-busting levels.  Graffiti inhabits nearly everything that doesn’t move, and some things that do.  English in many communities is a second language if it’s spoken at all.  Trash and litter is piled along the freeways and highways.  Businesses are fleeing to neighboring states, and taking their jobs with them.

Sacramento is a far left, one party town.  Most city governments are also run by liberal Democrats. As a result, the homeless pretty much run the state.  There is very little law and almost no order.  The mentally ill quite literally run the asylum. Drug addicts, gangsters, and petty criminals populate near ubiquitous homeless camps.

Local governments often pass out plastic syringes for free, but have banned plastic straws as an urgent and serious health threat.

Nearly one third of the nation’s homeless population calls a camp in California home.

Theft, sex crimes, and many drug offenses have been decriminalized.  Believe it or not, that means any theft worth less than $950 keeps the crime a misdemeanor. Thieves who in each incident steal products or cash with a value under $950 face NO pursuit, NO punishment, and ZERO interference from law enforcement.

Who pays?  Small business owners and consumers pay.  A homeless person can walk into a convenience store and steal up to $950 worth of cigarettes, food, and liquor, then walk out Scot-free.  If the store owner or manager says anything, the thief just ignores it, or worse, causes physical harm to the owner or damage to the store.

Some cities now post “defecation maps” online. Turns out the homeless use the streets and sidewalks as their bathrooms, and pedestrians run the risk of catching hepatitis or some other disease if they’re not careful to avoid those locations.

Is it any wonder so many foreign governments urge their citizens to stay away?

In many cities and states, including some in California, you get a big fine if your dog does his business on the street and you as the owner fail to attend to it.  But in California the law doesn’t apply to the homeless.  And I’m not just talking about that progressive wonderland of San Francisco.  I’m talking every major city in the state, from Sacramento to San Diego.  With the exception of a few wealthy enclaves where the rich and famous live – Beverly Hills, Hope Ranch, parts of the Silicon Valley – California has become a dump.

But homelessness is only one problem that’s reached epidemic proportions in the eureka state.

Another is taxes. Sales taxes, income taxes, business taxes, wealth taxes, auto taxes, gas taxes.  If you can name it, California taxes it.  The state government believes that every dollar you make belongs to them and you should be grateful they allow you to keep what you take home.  It’s ironic that some of the most liberal Californians flocked to buy condos across the Nevada border in Lake Tahoe, once California’s taxes started to sky rocket.  Advocating higher taxes for others is fine, paying them yourself is just too painful.

Schools are another horrific problem.  Illegal immigration contributes to the education problem, but that’s hardly the only factor that is ruining California’s schools. Just one example is the new “woke” progressivism taking root in education philosophy.  A recent policy mandates that 5th grade boys must participate in a ‘condom race’ in which boys put a condom on an erect blow-up doll and race to the finish line.  Little league?  Soccer? Nope, condom races.  The damage these people are doing to young children in the name of progressive politics is monstrous.

California’s taxpayers also pay the health care costs for illegals. Seem fair?  Not while schools are falling apart, homeless vets go without care, and energy shortages are almost as common as in much of the third world.

19th century philosopher Joseph de Maestri said, “In a democracy people get the leaders they deserve.”  Isn’t that the truth?  California’s terrible leadership is turning the once beautiful golden state into the deranged desolate state.  And voters have only themselves to blame.  They fell for the something-for-nothing promises of leftist Democrats.  So long as voters keep them in power, the destruction will continue.  And so far, there’s no evidence voters have realized their error.

The problem with putting your faith in the philosophy of “free stuff,” is that it’s very difficult to go back.  Once big government ruins everything, the politicians convince voters the only solution is even more government.  It’s an ugly cycle that if pursued to its natural conclusion assures universal misery.  There’s not much question that’s where California is headed.

Scarier, the rest of America may not be all that far behind based on polls that show many voters falling for the same free-stuff trap set up by the Democrats running for president.

Beware America.  Look to California before you vote in 2020, or their nightmare could become yours.

Biden 'Rips' Trump, Yankees 'Bash' Twins: Is Anyone Going to 'Slam' the Press?