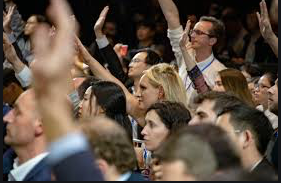 I don’t know when it started but have you noticed the prevalence of words such as ‘bash’, ‘blast’, ‘rip’, and ‘slam’ in today’s news articles? When did it become necessary to use words that denote violence to describe virtually every news event?

Wouldn’t it be enough to simply ‘rebuke’, ‘disagree’, ‘differ’, ‘dispute’, or even ‘bicker’? Is it really necessary to describe every event in this country as though it were a professional wrestling event? Where do we draw the line?

In the 1980’s I once remember David Letterman doing an opening monologue in which he joked that he saw Andre the Giant hit Hulk Hogan with a steel chair…and there was nothing in the paper about it! It was a good joke because pro wrestling advertises itself as sports entertainment. The athletes are real and much of the violence is real, but the events are scripted. It’s all about temporary suspension of belief. Everything that happens on a wrestling show is ostensibly tied to rivalries and conflicts that take place in the ring. However, competitors often do outlandish things such as attempting to maim opponents with weapons backstage. If it were a sanctioned sport with actual rules, people who engaged in such ancillary violence would face serious consequences, but they don’t because its entertainment. Therefore, newspapers of that era didn’t report on such events.

However, I’m beginning to think Letterman was ahead of his time and was in fact a visionary. I have never liked the term ‘fake news’ because I think it understates the gravity of the situation.

In a free society the press should play a vital role. Ideally, they would hold public and elected officials accountable for their actions…without showing lopsided favoritism towards one political party or demonstrating a vendetta against a single individual. Only significant and relevant events should be reported.

On any given day the articles I see on the web usually fall into one of three categories: 1) Anti-Trump Nonsense, 2) Miscellaneous Nonsense, or 3) Sexual Abuse Allegations. The first category is self-explanatory. The miscellaneous nonsense usually consists of irrelevant details about the lives of celebrities I don’t care about or comments made by left-wing politicians and/or celebrities that are so idiotic that it defies belief anyone takes them seriously. The third category always involves a famous, prominent, or wealthy man facing accusations regarding events that happened long ago.

I’m not sure why the third category is so prevalent. You’d think that there would be some code of ethics that dictates such delicate matters excluded from the news until they go to trial. Wouldn’t society and especially the victim (who deserves privacy) and the accused (who hasn’t been convicted) benefit from such discretion?

I finally had an epiphany Sunday morning. Letterman jokingly criticized the media for not reporting on a staged event that really happened. Sure, Andre hit Hulk with a chair, but it was done in the context of a fantasy world. If the media had reported on that event, it would not technically be fake news since it was an actual event. If it had been reported, then it could be said the media was gullible and treating a fake event as though it were real. Ironically though, sports outlets such as ESPN now report the results of wrestling events. Granted, said articles acknowledge the outcomes are fixed, but the fact they cover such events is interesting.

Then I saw an article entitled, ‘Yankees Bash Twins.’

Was that the best way to describe the event? This article title was mixed in with all the other articles about blasting, ripping, and slamming. Actually ‘slam’ would have been the best word to use since it was Yankees Shortstop Didi Gregorious’ grand slam home run that put the game out of reach.

The headline ‘Gregorious Hits Grand Slam in 8-2 Win’ would have been perfect. Headlines such as ‘Yanks Take 2-0 Series Lead’ or ‘Yankees Rout Twins’ would have also sufficed as I would not have found them confusing. The word ‘bash’ doesn’t tell me a whole lot. How am I supposed to distinguish the use of the word ‘bash’ in a sports article from the way it is used in other situations? In fact, I’ve seen the term ‘bash’ used in many sports-related articles to denote conflicts between athletes.

Simply put, I came to the realization that the news media is so focused on depicting everything as some sort of bitter conflict between conflicting ideologies that they can’t even report the outcome of a legitimate sporting event in clear and concise fashion.

‘Yankees Bash Twins’ could mean several different things given today’s reporting. I try to follow baseball, but I missed that particular game. I knew the Yankees won Game 1 but what about Game 2? I wasn’t sure. For all I knew the Twins won Game 2 by five runs.

Terms such as ‘bash’ have become ubiquitous in describing political and/or personal verbal squabbles. To my knowledge there is no animosity between the two teams. However, for all I knew the Yankees held a press conference in which they verbally lambasted the Twins about some aspect of their organization. What? Did the Twins’ pitchers toss baseballs at the heads of Yankee batsmen? Did the Yanks feel the Twins cheated in some fashion? Did the Yankees act in an unsportsmanlike fashion? Even worse was there a bench-clearing brawl in which the Yankees literally ‘bashed’ the Twins in a fistfight? The word ‘bash’ could mean many things. I clicked on the article to verify the outcome of the game, which is pathetic, but not unreasonable.

On any given day, if you look at the headlines, you’d think everyone was ready to go to war with everyone else. There is nothing but conflict after conflict. It has reached the point where I think a compelling argument could be made that news media has adopted the professional wrestling business model (no insult intended towards wrestling).

Pro wrestling matches often depict good versus evil. One wrestler represents good and acts heroic while the other wrestler represents evil and resorts to cheating. However, the wrestler depicted as the bad guy may be a kind and generous soul in their personal life while the wrestler depicted as the good guy may be a total jerk to everyone. Fans have more access to that kind of information. As a result, there are many situations where fans decide to cheer for the bad guy and boo the good guy. At times crowds have even come close to rioting in situations where the good guy (whom they truly hate) defeats the bad guy (whom they really love). It’s a very confusing scenario.

At least the WWE is upfront about admitting the outcomes of its matches are predetermined. People who watch wrestling are able to distinguish the character a wrestler portrays from the athlete portraying that character.

However, the media doesn’t give the public credit for having the same ability. Like wrestling promoters, they want to dictate who we are supposed to cheer and who we are supposed to loathe. To do so, they report on events that really happen (such as Pelosi vowing to impeach Trump) but they don’t explain the true nature of said events (i.e. admit that Trump hasn’t done anything to warrant impeachment and/or explain that impeachment efforts represent an attempted coup d’etat).

The problem isn’t fake news. The real problem is reporting on staged and/or non-events as if they were legitimate news.

The current impeachment talk is total nonsense and won’t amount to anything (just like the Mueller investigation) yet it’s being reported as though it’s a serious issue. I’m tired of my intelligence being insulted. The Democrats know they can’t beat Trump at the ballot box. Period. That is the reality. That is the real news. When will they figure out that people aren’t buying the lies anymore?

California’s Nightmare Could Become Yours

Daniel Greenfield: Bernie Sanders Could Have Died Under Medicare-For-All