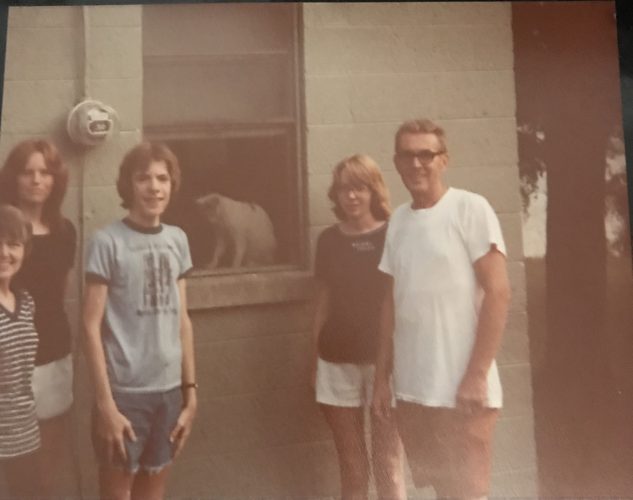 While on vacation this week, I took a trip to Claytor Lake State Park, a spot that holds so many memories of my childhood. Driving into the park I could feel the years peeling back to the 1970’s when my family would rent a cabin for a week each summer. I remember the anticipation of it all knowing the fun that awaited.

How I wish I could go back even if just for a day (mainly because I was much younger – and thinner – as you can see in the picture).

I park my car at the swimming area and make my way on foot towards the cabins. There are huge pine trees lining the area. A thought occurs to me. I can remember those same pines as small trees/saplings that had recently been planted. I also recall a ground hog hole nearby that fascinated me as a child. Without thinking I check to see if it’s still there. Of course it’s long gone. Then as I look out over the water the memories come flooding in and in my mind I am transported back in time and remember everything clearly from those summers. The smell of sun tan lotion, the sunlight reflecting off the water, pontoon boats lazily sailing down the lake, the sounds of the waves hitting the shore and the sun shimmering off the water like diamonds. 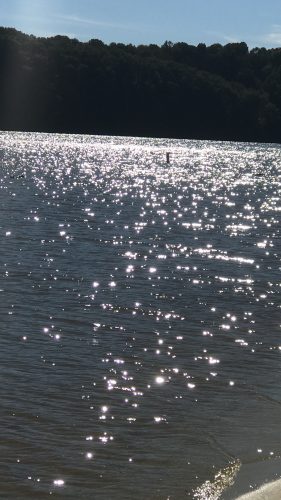 Those days were pure bliss filled with summertime fun. We would go to the swimming area and hang out for hours (waiting exactly one hour after eating breakfast before going into the water of course). While I never did learn to swim, I enjoyed splashing around and looking for “warm” spots in the cold water (and building sandcastles). We had a plastic football we threw around in the water, trying to aim it just right so it landed directly in front of the receiver giving them a good splash (especially my sister!). And later we would throw the frisbee around on the sand. I can still remember the feeling of the warmth of the sun hitting me as I came shivering up out of the water. And the HOT sand!

There was a jukebox that had a connection to a loud speaker near the beach area so you could hear your favorite songs while you swam. I can remember hearing “Listen to what the main said” and “Jive Talkin” (thanks to my Iphone and youtube I relived a memory while I was there). Later we would visit the concession stand and I would get an ice cream sandwich (which to me was the TRUE “afternoon delight”).

In the evening we would play softball in the open field across from our cabin and then catch lightning bugs in the twilight. We also enjoyed relaxing on the porch that overlooked the lake and watching the boats go by in the dark with their lights and whirring of the engine. Sometimes we would go play putt putt golf. The place is long gone, a corn field where I am sure I once made a hole in one while “Band on the run” played on the radio.

Supper time was highly anticipated after such a busy day that created a hearty appetite. We enjoyed eating the delicious food my mom cooked on a table covered with a checkered table cloth. I can still taste the hamburgers and sweet iced tea. Later we would cook pop corn (over a stove as this was a pre-microwave oven age).

At night my sisters and I would play games like “I spy” while going to sleep. The sound of crickets outside our window was so loud in their cacophony that it was hard getting to sleep. One time we took our cat and one night as I was drifting off to sleep I hear the crunch crunch of her chewing as she obviously thought a late night snack was in order. Later I woke up with a start as she decided the middle of the night was a great time to invade my personal space and sniff my face.

In the mornings we would wake to a lake that looked so still and green you would think you could walk across it. And then we would start the adventure all over again. 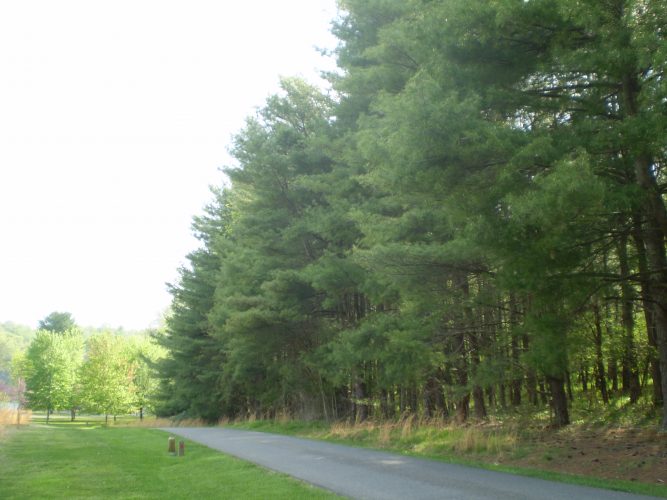 As I make my way back to my car to leave, I make a last look around at the pines and think about how long it’s been. I am thankful for those wonderful times and thankful to God for my memories of them. Even if it does bring a tear to my eye. I never wanted them to end. I still don’t.

Dr. Jamie Glazov: The Death of the Democrat Party

Democrats and the Smell of Rats