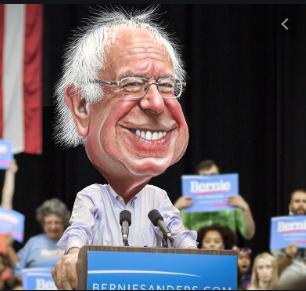 People’s Republic of America, 2021: Bernard Sanders, our new president for life, and his Vice President, Elizabeth Warren, today accepted their new responsibilities with much hoopla and hokum. Sanders changed the traditional oath, and dispensed with the Bible.  Immediately after the swearing in, Sanders announced the Constitution was suspended and the name of the country would henceforth be known as the People’s Republic of America.

The election of Mr. Sanders and Ms. Warren in November of 2020 was initially met with skepticism by observers due to the huge number of ballots cast by illegal immigrants and the deceased. Illegal immigrants have since been made legal citizens by order of President Sanders.

Conservatives took to the streets to protest the participation of massive voter fraud and Sanders’ subsequent suspension of the Constitution and other plans.

Law enforcement estimates that twenty-four thousand conservatives were killed and tens of thousands more attacked in rioting following the elections. Ms. Warren blamed conservatives for refusing to turn over their guns to federal authorities.

President Sanders used his inaugural speech as an opportunity to launch a large number of the glorious plans he had promised during his election campaign.

President Sanders declared all energy companies and the property that belonged to them, would be taken over by the federal government and managed by the government from its new U.S. Capitol in San Francisco.

Employees of the energy companies were required to attend re-education classes where they could properly learn the benefits of government run enterprise.

VP Warren announced amid widespread surprise a new series of tax brackets. She claimed the new system would be more fair.  Under the Sander’s Administration, those earning up to $25,000 would pay 40%; earners making between $25,000 and $100,000 would pay 60%; and all those making more than $100,000 would now pay 70% to the IRS.  All deductions have been suspended.  Warren announced that charity would no longer be needed, the government would take care of everyone.

Speaking of government care, President Sanders announced that all health care would now be centralized under federal control.  Priority for treatment would first be given to federal workers. Also receiving priority care would be those working in re-education facilities, abortion clinics, clean energy agencies, gun confiscation programs, and the newly created Department of Special Police.  Since Special Police are secret, they’ll be identified as employees of other agencies, thereby protecting their true identities.

The groups prioritized last to receive health care include the infirm, the elderly, and anyone who has been a registered Republican voter within the past 5 years.  To provide relief for any in those groups who care to take advantage of it, Sanders has established a Suicide Assistance Program.

Ms. Ocasio Cortez sent a press release immediately following her appointment outlining her plan to require every home install solar panels on their roofs within the next 24 months.  In addition, at least one wind turbine will be constructed on each ½ acre of land paid for by the land owner.  For those unable to pay the $65,000 cost of building the turbine, AOC promised government backed loans repayable over 10 years (after tax payments will be deducted monthly from the borrower’s pay check.).

AOC also outlined plans to revolutionize America’s transportation system. She promised that 100,000 new electric buses will be put into place.  Cars will be confiscated and government credits issued which can be used as bus fare. Participation in the new transportation program will be mandatory.

In his inaugural speech, President Sanders revealed his conviction that population growth was a major reason for climate change.  As a result, Sanders required that  starting immediately any pregnancy beyond the first child in a family must be terminated within 30 days at a registered abortion clinic.  Any family caught endangering their fellow citizens by breaking this rule will serve a mandatory 3 years in one of the 1,000 new re-education facilities currently being constructed.

If all this sounds like an episode of the Twilight Zone, you are not paying attention to the Democrats running for president.  It’s important that if you value your freedom, your economic well being, and your family’s future, you do so.

Clare M. Lopez: John Bolton Out and the Consequences