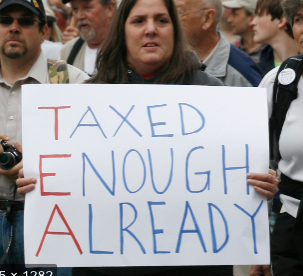 The race for the Democrat nomination has only been going full bore for about 3 months and already the candidate’s promises could bankrupt America.

As costly as this list is, it doesn’t include promises of universal child care, guaranteed jobs program, low-income housing, tax refunds for gay couples, managing world wide abortion clinics, and so many other ideas on the Democrat’s wish lists.

But here’s the problem for Democrats. Even if they took 100% of every person’s and every company’s income in the United States, it wouldn’t be enough to pay for even half of their promises.

No problem for Democrats. This is their standard ploy.  Make crazy promises to get votes, then blame Republicans for preventing those promises from being kept.  It gets Democrats off the hook, and provides negative talking points about their opponents.  And it locks gullible voters permanently into their voting coalition.

And even though their promises aren’t fully kept, Democrats nevertheless move America a little further left each election year.

It’ s not just the money it costs taxpayers, though that’s horrendous enough.  It’s also how Democrats are shattering our values … things like hard work, personal responsibility, freedom, and personal rights.

Sure, they make only incremental progress each year, but eventually each new give-away program whittles away our freedom, our dignity, our independence, until one day politicians and bureaucrats have taken control of the most important aspects of our lives.

Consider health care. Not only will their plans cost trillions; government control will reduce incentives for innovation, reduce quality, and lead to rationed care.  And once politicians decide who gets what care, it’s a very short step to rewarding your political supporters and punishing your opponents.

And free college? Expect the federal government to decide what’s taught and who’s teaching it.  Can you say brainwashing?  It’s bad enough that standardized tests show that more than half of students today aren’t proficient in math, history, science, or reading.  To the failure of public schools, add radical politics and it won’t be long before things go from very bad to horribly worse.

Pretty much every Democrat for president claims climate change is an existential threat to our planet. That hysteria has led to some insane proposals.

The question remains how Democrats will explain to voters the plan to pay for all their promises. Some say they’ll get it by cutting defense spending.  But doing so would only gain about half a trillion per year – about what it would cost to provide illegals with free health care, education, and food stamps.   Now there’s a good trade off!

Democrats are waging war against American taxpayers and American values.  Sound like hyperbole?  Consider that the cost for all their free stuff means taking money from those who earned it and giving it to those who didn’t.  When individuals do it, it’s criminal and immoral.  When the government does it, it’s taxes.