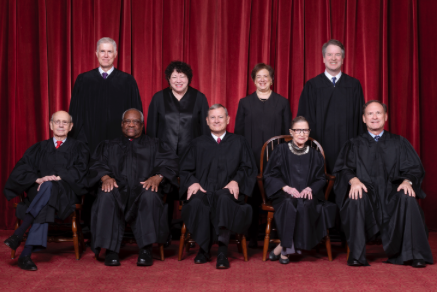 I ran across a Facebook Group called “Fix the Court” last week and was amazed at all the false information being tossed around about what is wrong with the Supreme Court of the United States.

In reality, the fallacy that is being perpetuated is the outright lie that Supreme Court justices are appointed to the bench “for life.”  A brief read of the appropriate section of Article III of our constitution makes it clear that justices are to be appointed “…during good behavior…” as opposed to “for life.”

That having been said, one must establish a basis for determining whether a justice is serving during good behavior.  From everything I have been able to find, the best way to describe “good behavior” in a justice is behavior that comports in every detail with the requirements of the constitution.  Nowhere does the constitution provide for justices to vote based on whether they think the constitution is correct as written or deserves to be “re-interpreted” based on “modern circumstances” or other ideological imperatives.  Therefore, any such tendency should immediately subject the justice to impeachment on the grounds that their behavior does not comport with the constitution’s requirements.

The appeals courts created by law and the Supreme Court created by our constitution has only one purpose.  That purpose is to examine the law in question to determine if, in all aspects, it is faithful to the requirements of our constitution.  Once that determination is made, the courts are obligated to examine the trial court record to determine if that court followed both the constitution and the law in question.  If, in both cases, the law and the court record are following the constitution, then the verdict of the trial court should be upheld.  If either of them is not in complete agreement with the constitution, then the decision of the trial court should be overturned.  Any deviation from this approach is, in fact, bad behavior on the part of the judge(s) involved in the decision.

Nowhere is the court given leave to alter the original text or meaning of the constitution to suit their beliefs or thoughts.  There are copious documents authored by those who helped to write our constitution that give ample affirmation of their reasoning.  These are the only documents other than the constitution’s text that should be used in determining ‘original intent.”  If it is the law that is in question, then the records of the Congress and the text of the law should be the source of interpretive information showing the intent of the law.

The argument about balance in ideology within the court is a fallacious one that is based on political rather than legal principles.  The courts are designed and were envisioned by the founders as impartial, objective evaluators of truth.  Despite what the leftists would choose to have you believe, there is only one truth. Everything else is opinion based on ideology or politics.  The labels of “conservative” or “liberal” when referring to judges or justices is also a distortion of principles.  The objective process described above is either followed or not followed.  That is the distinction between good behavior and bad behavior.

Constitutional law need not be a mysterious and difficult subject to study or uphold.  It is simply being made highly difficult by ideologues who see the courts to achieve their agenda when the constitution would otherwise prevent it.

In closing, I will briefly mention that this group seems to be all about “term limits” for judges and justices.  While, on the surface, this might seem like a quick fix to the problem which should not even be a problem.  If the clear terms of the constitution were used as a guide, there would be no need for term limits because it would be imperative that ALL justices and judges either follow the process outlined or be deemed as behaving badly which could be grounds for immediate removal through the impeachment process.  Like the suggested term limits for Congress, term limits for judges and justices are nothing more than an avoidance of the real problem.  With Congress, it is a lack of knowledge and understanding of our constitution on the part of the citizens.  With the courts, it is a failure to read the plain language of the constitution and then following its original intent.  It’s not rocket science, folks.

Daniel Greenfield: Amazon Should Not Control the Military Cloud