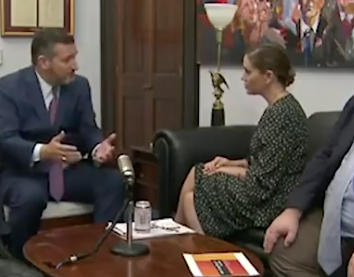 After listening to the video of the above “debate” (more of a discussion than a debate) I was struck by several specifics, but overall it was a disappointment. Actress Alyssa Milano brought a surrogate with her – the parent of one of the students killed in the Parkland school shooting – who did more of the talking than she did.  Cruz failed to take advantage of several opportunities to challenge his opposition while they used bogus statistics that demonstrate just how ill-informed and emotion-driven they really are.

At several points in the discussion, the figure of 40,000 annual deaths from guns was used as an argument that “something has to be done.”  Given the insistence on “gun-bans” of all AR-style rifles, it is far more accurate to use that statistic which most closely identifies the number of deaths from that type of weapon.

According to the FBI’s Uniform Crime Report for 2016 (latest available on their website), the total number of murders by firearms totaled 11,004.  Of those, only 374 were committed with any type of rifle.  Meanwhile, almost twice as many (656) murders were committed with bare hands, and over four times as many murders were committed with knives or other cutting instruments.  Are we to assume that people should be denied the right to have hands, feet or whatever part of their body might be used to kill someone?  That is, of course, absurd.  Should we institute knife control?   Also absurd, but it illustrates the level of hysteria that surrounds the entire subject of AR-style rifles, in particular.  The statistics do not break down how many of the rifles used in those murders were AR-style rifles, but an educated guess would be nowhere near the majority.

The 38,000-figure used in the discussion fails to specify that the rest of the 27,000 – odd deaths from firearms were either accidental or self-inflicted.  Cruz has a perfect opportunity to make this information clear to a large audience but ignored it completely which is tantamount to accepting the figure as accurate.

Cruz spent much of his time steering the discussion back to his legislation that would make it a criminal offense to attempt to purchase a firearm if you are ineligible to do so (convicted felon, or fugitive).  Good move. What his bill fails to address is that it is typically the practice of most prosecutors that deal with crimes involving firearms to attempt to plea-bargain the defendant to avoid a costly trial.  In exchange for a guilty plea on the primary offense or even some lesser criminal charge, the charge of using a firearm in the commission of a crime is typically the first one to be dismissed in exchange for the guilty plea on the other charge(s).  This is a travesty of monumental proportions.  It effectively neuters the laws already on the books that would be highly effective in getting violent criminals off the streets and away from firearms.

Throughout the discussion, there was little in the way of facts offered by the proponents of gun control. If you had to choose a “winner” it would be Cruz, but in winning he did himself and those who support the rights of legal gun owners a disservice by not taking advantage of the opportunity presented to get specific in his statements pointing out the fallacies being offered to support what amounts to unconstitutional restrictions on the innocent citizen while ignoring the realities of today’s society and its failures of morality, family-structure, mental health and honesty in its public discourse.

Milano tried to make a point that honest and civil discussion could bring about solutions and agreement on the issues of concern, but what that means to those who support further restrictions on firearms is that the compromises should all come from among the innocent citizen who just wants the freedom to decide how they will defend their families and friends when crime strikes close to home or when government becomes a tyranny upon its citizens. That last point was specifically dismissed by the Parkland parent as irrelevant an unrealistic.

So, there you have it. The gun-control gang simply does not want the primary purpose of the 2nd Amendment even given consideration in the discussion. How can we have a rational discussion when one side simply does not get it?

Stand fast and tell your Congressional delegation that further infringements on 2ndAmendment rights will not be tolerated any longer.

Daniel Greenfield: Oh To Be a Democrat in New Jersey