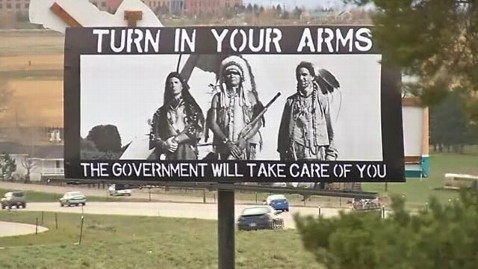 Back in 1963, John F. Kennedy’s assassination set off the first major wave in demands for gun control legislation since the depression-era National Firearms Act of 1934 that was a reaction to the mob crimes era that produced “Tommy-guns” on every corner and things like the St. Valentine’s Day Massacre.

In 1964, the era of being able to purchase a firearm through the Sears Catalog and have it arrive a couple days later in a plain brown box at your door came to an end. Lee Harvey Oswald, a leftist, was responsible for that law and leftists have been pushing the envelope ever since. Since then the highlights of their success have resulted in the Brady bill – the creation of the National Instant Check System – which has had no impact on gun violence to speak of.

Given the fact that so-called “mass shootings” have accelerated significantly since its passage you might even be able to stretch that into a “correlation” – that the NICS system could be correlated with an increase in gun violence – but that, in reality, is nothing short of a myth…just like the myth that you can legislate morality.  Oh, and don’t let me forget the infamous “assault weapons ban” that took place across the Clinton and Bush years–ten of them–with not one iota of evidence that the measure had any material impact on gun violence either.

Now, the left is renewing their assault in assault weapons – any firearm that is gray or black or tan that looks scary and has a pistol grip and a flash suppressor on the barrel – and those who legally own and use them for any number of legitimate purposes that have nothing to do with violence against their fellow man.  This assault appears to be multi-pronged, though.

Renewed demands for a ban on “military-style” firearms regardless of whether they are military-grade or that they just look similar is just the start.

So-called “red-flag” or “extreme risk protection orders” are high on the list of demands as well. These laws (as enacted by several states) provide no due process protections to the defendant being accused of dangerous behavior before the police show up at his/her door with a demand to search and clear the residence of any firearms that the defendant might be capable of accessing.

Only after a protracted period is a hearing scheduled (for which the defendant must hire their own attorney) and the accused is given the opportunity to prove the negative – that he is not a risk to other human beings.  That is a near impossibility if the person filing for the order can concoct a detailed enough narrative that makes the person sound scary. It may take years and thousands of dollars to ever recover one’s right to purchase or even own the firearms that they owned before the order was issued.

The last demand that comes up often is the insistence on including every transfer of every firearm between two different individuals without exception for in-family or gift-type transactions.  No longer can a grandfather leave his grandson a favorite .22 rifle without going through the expense and inconvenience of having a twelve-year-old (or their parents) going to a Federal Firearms Licensee (FFL) to complete the transaction and have a background check conducted to determine if the receiving person is eligible to exercise his/her constitutional right to keep and bear arms.

Other moves include increasing the age for ownership of a rifle to 21 instead of the current 18. That seems to fly in the face of arguments that were vehemently fought over the idea that one could not vote at 18 but could be sent to fight a way across the world at that age.  Now we are reversing the argument and claiming that 18-year-old youth are competent to fight in our wars and defend our freedoms but are not old enough to exercise the responsibility needed to own a rifle. What could better define insanity and/or irrationality?

We have even had some of the Democrat Party’s candidates for the Presidency coming right out and admitting that the end goal is confiscation while at least one has more modestly suggested that a firearms “registry” is a good idea.  What better way to know who has the firearms and where to go when the confiscation begins?  It is only a matter of time if the 2020 election goes left instead of right.

So, I return to my original question.  What have any of the existing or proposed laws done to reduce gun violence?  Nothing, zero, nada, zip!  They have done nothing because of one simple consideration that has been completely disregarded by the Democrats and others who would disarm America. Only the law-abiding obey the laws of man. They generally try to obey the laws of God as well: Thou shalt not murder is high on his list of laws. Some of us take that seriously.

Criminals and the mentally ill–and I include anyone who commits a mass murder via any means in the latter group because no sane individual would ever consider doing such a thing – are a completely different story.  They have demonstrated by past behavior that they do not care what the law states, so no new law will mean any more to them than the hundreds already on the books.

Bottom line is very simple. So-called “gun control” laws may appear on the surface to be efforts to make us safer.  They don’t.  They give Democrats the opportunity to virtue signal that they “care” while they scheme to dismantle the U.S. Constitution and the Bill of Rights one provision at a time. They know that the 2ndof those right guaranteed without qualification by the 2ndAmendment is the one that has to go first in order to make it much easier to eliminate the rest of them.  Gun control continues to be singularly NOT about guns, but rather it is about control–of us!  Don’t be fooled.

Slavery, Municipal Bonds, and Healthcare: HOW Are These Related?

If We Do Not Work for Freedom, Do We Deserve It?