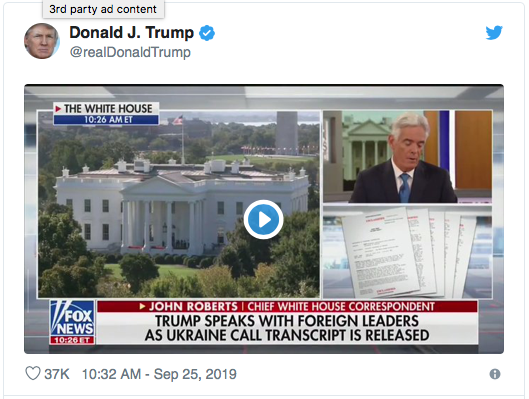 The White House released the official transcript of a call between President Donald Trump and the Ukrainian president Wednesday, and while Trump did ask Ukrainian President Volodymyr Zelensky to look into former Vice President Joe Biden he did not mention any aspect of withholding aid from the nation if it was not done.

In fact, Trump spoke highly of the U.S. relationship with Ukraine, while chiding Europe’s lack of support for the independent nation. Trump’s full transcript with Zelensky also reveals that the president is seeking more information from Ukraine with regards to the role of Russian or Ukrainian persons involved in the hacking of the Democratic National Committee’s server. His concern is significant, because Democrats accused the president and his campaign of conspiring with Russia. This request actually destroys the Democratic argument.

As for Biden, Trump asked Zelensky if he would speak with his personal attorney Rudy Guilliani and Attorney General William Barr with regard to Biden and his request withhold 1 billion in aid from Ukraine until they fired the top prosecutor Viktor Shokin, who was at the time investigating Biden’s son, Hunter Biden. Biden’s son  role on the board of Ukrainian energy company Burisma Holdings, which he joined as a paid board member in 2014, has come under enormous scrutiny.

During the time, in Vice President Biden was charged with handling Ukraine and his son’s firm Rosemont Seneca Partners LLC, “received regular transfers into one of its accounts — usually more than $166,000 a month — from Burisma from spring 2014 through fall 2015, during a period when Vice President Biden was the main U.S. official dealing with Ukraine and its tense relations with Russia,” according to an investigation by John Solomon at The Hill.

According to Solomon “the general prosecutor’s official file for the Burisma probe — shared with me by senior Ukrainian officials — shows prosecutors identified Hunter Biden, business partner Devon Archer and their firm, Rosemont Seneca, as potential recipients of money.”

Biden has stated that the urging of Shokin’s dismissal was based on corruption concerns and did not relate to his son.

Democrats have accused Trump of pressuring Ukraine to investigate Biden, his political opponent and stated that Trump’s decision earlier before the call to withhold $400 million in aid from Ukraine was being used as a lure for an investigation.But the transcript reveals no such quid pro quo.

Instead, Zelensky appears to have promised Trump that the new Ukrainian prosecutor would be investigating the Ukrainian company Burisma holdings.

Read more HERE including the declassified phone conversation at Saracarter.com.

Barry Shaw: Does Anyone Tell the Truth Anymore?