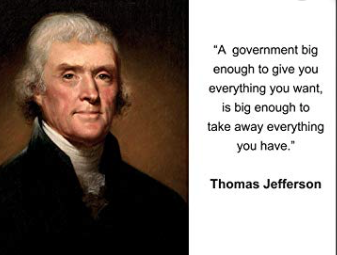 The founding fathers’ fear of government tyranny was strong, and now it appears to have been proven to be with good reason.  I believe that where this country went wrong was when we started sending representatives to Washington with the desire to see them “bring home the bacon.” We send them there with a “What’s in it for me?” mentality that made “pork” acceptable. We made special interests able to buy influence, and that allowed representatives to believe it was acceptable to do what they have been doing because we, the citizens keep sending them back.

What can we expect when the amount of money raised by a representative  – FOR THE PARTY – dictates what committees and what chairmanships that representative is awarded?

We need to embrace the wisdom of those courageous people that founded our country with their own blood, sweat, tears, and personal fortunes.

Those are the commitments we should be demanding from our candidates. If it were happening, we would not be $22 trillion in debt or mired in foreign wars, and our economy would not be micromanaged along with our lives.

When this begins to occur, a by-product is that special interest influences become weak because they cannot depend on representatives to deliver what they want unless it is consistent with Constitutional limits.  Funny how that works, huh?

Lately, it seems that while we obviously need protection from outside enemies in whatever form they present themselves, we need protection from the government in equal measure.  The only thing that is lacking at the moment is the representatives doing what they should to achieve that end.

To ask for such commitment from our representatives requires that we speak up and make our feelings known, make our values known, and make our intentions known.

Our intent must be to return honor, integrity, honesty, and Godly principles to our representation. We must let those who contemplate running for office know that we expect no less and will tolerate no less from them.

Unless we do, well, the picture will continue to grow dim and sinister, and America’s “shining city on the hill” will become a fortress for the elites when the hammer comes down on all of us.

Someone Please Show Me a Law That Has Reduced Gun Violence!