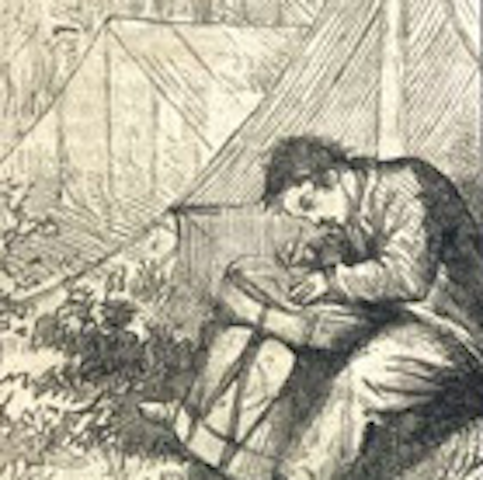 For those interested in genealogy there is no greater treasure than to find a cache of letters from the past. Sometimes they have great historical value like ones written back and forth between young men and women serving during wartime and their folks back home.

Dr. James Robertson, a noted Civil War Historian for forty four years at Virginia Tech University made a collection of letters donated by families willing to share Civil War memorabilia. In a major study Robertson found that one of the things causing the South to lose the war was pressure from home. He compiled hundreds of letters from the mothers, wives, sisters, sweethearts urging their young men to come home as they were needed badly to keep up the farm. Most of the Confederate soldiers were farmers, never owned a slave, had no knowledge of states rights and other issues of the day and just felt they were fighting with the duty to protect their families and homes. There were no letters from a Scarlett O’Hara type wanting to protect a plantation. A lot of desertions were caused by these letters.

This was pretty much true of Federal young men and in this regard I was fortunate to find a letter from a great grand uncle in the Ohio Army, William C. Flick. It was written in October, 1864 outside of Lexington, Kentucky. After the war his sister Ellen would marry my great grandfather, also a veteran who served with the Union forces.

The letter went as follows (and in some respects could echo letters that our fighting young people have written in more recent wars):

I now seat myself to answer your kind letter which came to hand the 28thof last month. I am well and most of the boys are well. But Dan Woods, he hain’t expected to live. We are camped by the edge of the city, it is a beautiful place. We had some far marching to get here. We went five miles double quick which I did not bargain for. It has been very cold with six inches of snow. The farmers have brought us plenty to eat.

“Norman, you said in your letter you thought you were old enough to go in the army. I think you are foolish for that as we aren’t sure why we are here. I thought I was protecting the farm. If you go, don’t go in the infantry. Artillery for me. It tain’t half as hard as being a foot soldier. Another thing I will say is if you go don’t drink whisky. There is some men every day under guard for drinking wood alcohol. That is what is killing Dan Woods.

There is twenty five thousand Union troops here now and fifteen hundred Rebel troops laid down their arms in Louisville recently and we may go there in a few days. I wonder what they were fighting for. Their homes like us?

We get enough to eat such as it is, hard crackers, fat sow belly and sometimes rice. We got some light bread the other day. If I had some of mother’s butter here I could eat it without any trouble. There is plenty if we pay for it.

I would give my bounty I was paid to enlist if I could get out of this so both of us could go fishing. I am on guard duty today so cannot write more.

Don’t coax Henry to enlist as Terry will cry and get sick. They have family to care for. Give my love to Father and Mother and sister Ellen.

From your brother William C. Flick.

What is sad is the education improved going into the end of that century and in the 20th. Our young men and women had some knowledge of history and government and knew that tyrants like The Kaiser, Hitler, Mao and others had to be stopped. The point of this article is how well will future men and women in the service for our nation’s defense know what they are fighting for.

We hear about so many school systems no longer teaching civics and government and so much history being watered down. It was the study of history that made this writer want to teach the subject as well as government so young people would know what a great nation we have. A nation with values worth defending.

From stories we have heard we have to excuse Great Grand Uncle William for not knowing all the background of the bloodiest war in American History. It was not being taught and most young people never went beyond the seventh grade. However, today we cannot excuse our education system for stunting the mental growth of our young people about history.

The People That Inspired Us in Life