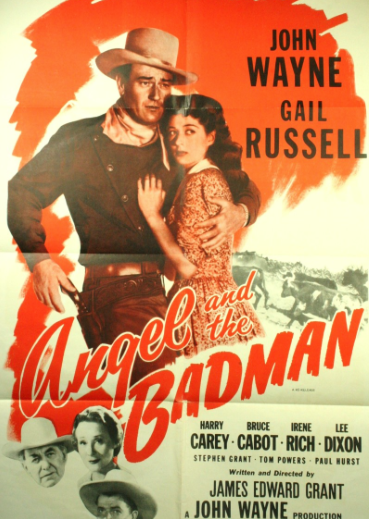 As a kid growing up in our small town there was a tine machine. Yes a real time machine where you could sit with friends and family and go to the past, the future and any part of the world. These were the movies and they were a great source of education, sometimes more than school. We could see examples of honor shown by stars like Jimmy Stewart. John Wayne, Roy Rogers and many others. There were any number of family related and religious films to meet every taste. Never mind that the film makers may have had a motive more of making money with big box offices rather than serving a moral or Godly purpose. It was a matter of public demand.

PolitiChicks has run a number of articles about the corruption in the motion picture industry. We see news stories about how that beautiful image we once had of the motion picture industry no longer exists. Maybe it never did and the dark side had been well covered up, but to us who loved the movies. what we called old Hollywood. is sadly missed. However, there is hope.

There are stars and film makers in Hollywood who have rejected the so called new age and who labor to bring us improved entertainment. Plus Hollywood no longer has a lock on film making as there are new companies thriving in many parts of the nation. There has been a movement in recent years of fans and those connected with film and TV to provide us with something better.

For a period of nearly twenty years my wife Carolyn and I had worked with and attended media events across the nation and there was something we would hear from time to time from a film or TV performer. “I am not permitted to talk about God or Jesus Christ in conventions, not even privately at my autograph table.” We also heard stories of stars warned by film makers they could not wear a cross on the set or mention their religion. Foremost in this was Star Trek actress Grace Lee Whitney, a former alcoholic now a Messianic Jew who told us “I cannot share my witness of how Jesus saved me. Not even to explain obvious changes in my life style and speech.”

With this in mind we contacted media stars who we knew to be Christian with the idea of running a series of Christian media conventions that would follow the pattern of other conventions, except our guests from film and TV would be able to give their testimonies in their talks and on panels. Sunday morning we would have a regular church service.

We needed a title, and that was provided by Grace Lee Whitney when she heard of our plans. Her son, a public school teacher, had a Christian jazz band called Point North. The title suggested a moving ahead, as the North Star often led people to reach their destinations. We also knew that escaped slaves used the North Star to guide them to freedom. We immediately incorporated the ministry under the name Point North † Outreach. We formed a corporation with a board of directors that included Rhonda Fleming, Deanna Lund, Grace Lee Whitney, my wife Carolyn, and myself.

The next steps were forming a mission statement to cover these events and starting a publication. After much thought we came up with:

Point North † Outreach, Inc., is a nondenominational Christian organization that highlights, promotes, and supports what is being done in regard to faith and family productions. Our Christian media events and our publication, Point North † Tidings, is for all fans of the media who desire to see more faith-based and family films and TV shows. Our goal is to inform those who attend our events and publication readers about these productions and artists, and encourage them to support the films and TV shows they create that reflect Christian values, thereby ensuring a vital and growing market for the programs and films that will positively impact our culture. Through public and publication interviews fans may witness the transforming power of God’s love and saving grace through His gift of the risen Jesus Christ. The Point North † Outreac acknowledgesand respectsthat the Christian walk is a continuing process of growth in faith, hope, and love to reach spiritual maturity. We also seek to share this with non-Christians so that they may experience the joy of knowing Jesus Christ.

We ran four successful shows, but found our publication could reach more people as we could cover the work of all connected with film and TV production through interviews and reviews. This drew a lot more attention than we thought it would and we made many friendships with people wanting this information. We went even further by promoting and publicizing productions that were in the infancy of production and needing support. Some advised us against the latter, but we had the satisfaction of seeing independent faith films gaining a great deal of success. We found the public out there is hungry for better films and TV shows.

Another amazing outgrowth came which was a surprise though we know God often likes to surprise us with new opportunities and ideas. This writer had pretty much stopped convention work devoting more energy to publications. My wife and I were approached by friends to start a new type of media convention, a Western related one as there were no other in Virginia and none close by in surrounding areas. Two years ago we worked with friends to hold a trial one day event in Roanoke, Virginia titled Happy Trails Virginia Style and had guest stars and film showings. It went better than expected and helped lead to a miracle.

Last year we expanded to three days and included workshops plus musical programming. Something happened that we had never seen before. Some of our guests promoted faith film productions either finished or introduced. There was Spice Williams-Crosby with a short faith film Talk to the Animals, Kathy Garver and Lisa Bennett showed clips from Grace, Laurie Prange ran a short feature on her documentary about hymn writer Fanny Crosby and Jim and Jenn Gotzon Chandler showed clips from their coming film The Farmer and The Belle. These were the very first day and set the tone for the rest of the convention. There were prayer groups at some of the autograph tables consisting of guests and fans. One of our guests, Chief Steve Silverheels is also a pastor and there were some anointings. We would hear long after the event of attendees who were greatly influenced by the Christian spirit that existed. This was unplanned by us, but we believe it definitely was in God’s plan. 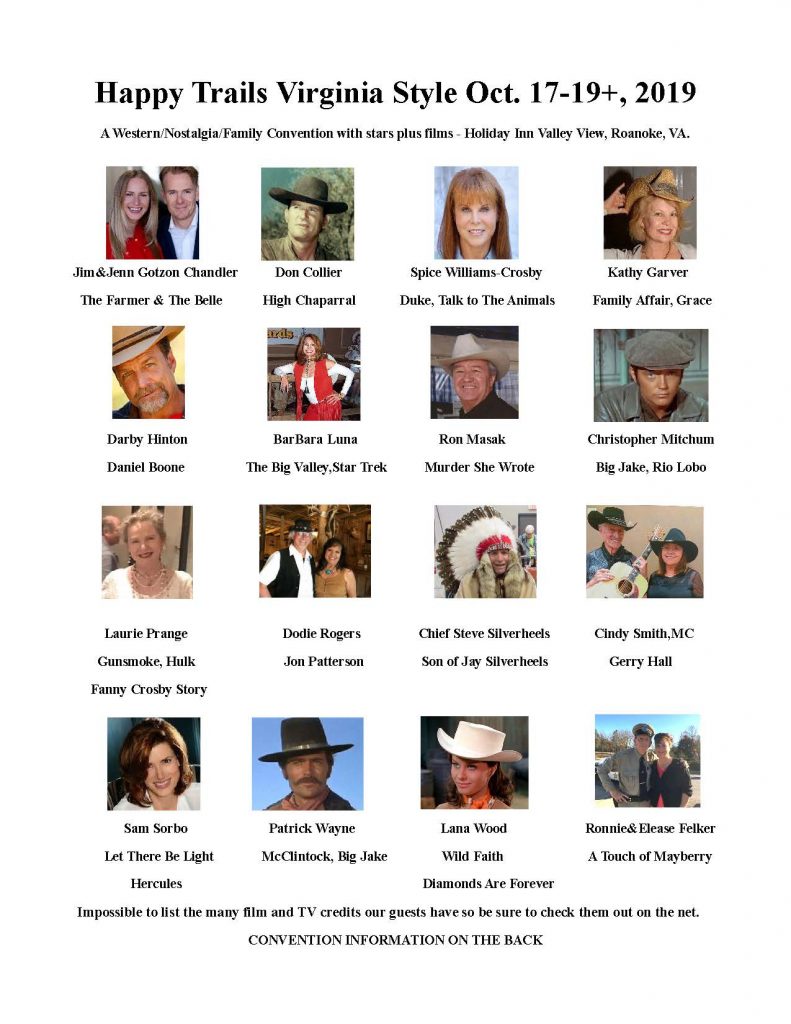 Another event is planned this year in Roanoke, VA, Happy Trails Virginia Style with an emphasis on not just Westerns and nostalgia, but with emphasis on faith and family. Though the general programming will be like other such events there will be morning devotional periods and more emphasis on faith films. Something very new for any media event is that we also have a church emphasis. Though scheduled for October 17-19, a Thursday through Saturday, on Sunday October 20tha local church, CommUNITY in Salem, will continue the programming.

Now to all intentional purposes it would seem that this writer is trying to promote an event. The real purpose of this article is to express a strong belief that the film and TV industry can be and is being resurrected. As Paul in the New Testament used many devices to spread the Gospel, this writer believes that God can use motion picture and TV productions to spread the word and to fight the sickness that threatens to overwhelm this nation and the world. We can only pray that God will use us.
Share
Facebook Twitter Pinterest Reddit Share via Email Print

Barry Shaw: Israel, The Dreyfus of Our Time