Awais Chudhary, a Pakistani immigrant, lived with his parents in their $920,000 house whose street number ends in 911, a block away from the Grand Central Parkway, where he hoped to drop bucket bombs on passing cars, and blocks away from the Dunkin Donuts where he plotted a stabbing spree.

On the other side of LaGuardia International Airport sits the New York City headquarters of CAIR. 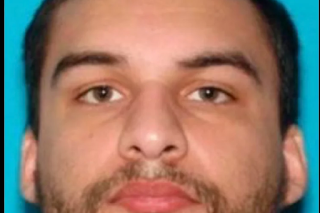 If the 19-year-old Islamic terrorist had kept going after, in his own words, planning to use “a knife to spill the impure blood of a kafir” or non-Muslim, he could have easily ended up in the offices of the Islamic group most associated with defending and justifying Islamic terrorist violence worldwide.

Once upon a time, Queens was the home of working-class New Yorkers. These days it’s the home of a growing number of Islamic terrorists. The Pakistani terrorist’s mother showed up to support him in court wearing a full black burka. Cameras caught other members of the clan covering their faces with hijabs.

Burkas and hijabs are a common sight in Queens. As are mosques and FBI raids on terror homes.

The terrorist’s family had a choice between the Al Madni mosque, the Nuriddin mosque, the Al-Falah mosque, the Khazara mosque, the Islamic Center of Jackson Heights, the Dar-ul Furqan mosque and many others not far from LaGuardia. And the terrorists have an even wider choice of kafir targets.

Earlier this year, Ashiqul Alam, a 22-year-old Bangladeshi Muslim immigrant, was arrested in a Queens apartment for plotting a bombing of Times Square. Alam had been interested in getting a suicide bomber vest and seeing the “flag of Islam” flying from “the Empire State Building.”

Alam’s social media revealed that he was a supporter of the campus hate group, Students for Justice in Palestine, as well as the Bangladesh Muslim League, and Jaamat e-Islami Pakistan. The Alam family’s apartment was a few miles away from where the Chudhary clan lived. The closest mosque, Dar-ul Furqan, was only a few blocks away in this predominantly Muslim enclave.

But terror plots just seem to spring up in Queensistan.

In August, Asia Siddiqui and Noelle Velentzas, Queens roommates, pled guilty to a pressure cooker bombing plot. Velentzas had gushed that paradise lies through the “flesh of the kufar” or non-Muslims, and had cited the attack by Zale H. Thompson, a Muslim convert, on two police officers in Queens.

Imam Charles Aziz Bilal of the Masjid Al-Hamdulillah in Queens denied the charges against the terrorists.

Siddiqi had been inspired by Samir Khan, a Pakistani immigrant formerly in Queens, who headed Al Qaeda’s Inspire magazine. It was Khan who had authored the famous “Make a Bomb in the Kitchen of Your Mom” article that was used by the Boston bombers for their pressure cooker bomb, and by the San Bernardino shooters, and the Chelsea jihadist, Ahmad Rahimi, who set off bombs across New York.

Earlier this year, Najibullah Zazi finally pled guilty to a plot to bomb the New York City subway system. The Afghani Zazi family had moved to Pakistan and then to Queens. Zazi was recruited by Al Qaeda in Pakistan and along with two Muslim high school friends from Queens began plotting mass murder.

Former Attorney General Eric Holder had described the 2009 plot “one of the most serious terrorist threats to our nation since September 11, 2001.” Nevertheless, a decade later, Zazi was finally sentenced to time served. He will rejoin his father, Mohammed Zazi, who apparently doesn’t speak English, but admitted to covering up for his son and was sentenced to over four years in prison.

Amanullah Zazi, Najibullah’s cousin, whom Mohammed falsely claimed was his son, in an immigration fraud plot, and the terrorist’s uncle, Naqib Jaji, pled guilty to obstruction of justice.

Imam Ahmad Afzali, a Queens imam, had also tipped off the terrorist on September 11. Afzali has since been deported to Saudi Arabia. Masjid-al-Saaliheen and Masjid Hazrat I Abubakr, where Afazli preached, remain behind in Queens. The hulking Hazrat mosque overshadows the churches that surround it.

But the NYPD’s monitoring of the Queens College MSA was attacked by the pro-terror media.

Admedzay had prayed at the Abubark mosque and studied Islam with Imam Afzali.

Unlike the other Queens plotters, Medunjanin did carry out a terrorist attack when he tried to ram another car, while shouting, “We love death more than you love your life.” No one was actually hurt.

Quazi Mohammad Nafis, a Bangladeshi Muslim immigrant living in Queens, had wanted to detonate a truck bomb at the Federal Reserve building. “We will not stop until we attain victory or Martyrdom,” he had declared. The Queens apartment where the Islamic terrorist lived and plotted the mass murder of Americans was a few blocks away from the headquarters of the Islamic Circle of North America (ICNA).

The Islamic enclave in Queens is home to more than 10,000 Bangladeshi Muslim settlers.

Nafis was just one of them.

Queens was also the home base of Mohammad Ashrafuzzaman Khan, another Bangladeshi immigrant, the former Secretary General of ICNA, and the head of the North American Imams Federation. Khan was sentenced to death in absentia in Bangladesh for torturing and murdering secular political opponents.

Khan’s killing squad was an offshoot of Jamaat-e-Islami, the same Islamist group which, Ashiqul Alam, the Bangladeshi Islamic terror plotter arrested this year in a Times Square plot, appeared to support.

The United States has failed to turn over the former ICNA leader to Bangladesh to face justice.

In previous generations, Queens had produced Donald Trump and David Horowitz. These days it’s the haunt of Islamic terrorists who plot the mass murder of kafir infidels in basements, apartments and hotel rooms. What was once an enclave of the middle class is becoming enemy territory.

Grand Central Parkway, where Awais Chudhary, the latest Islamic terrorist operating out of Queens, planned to drop bombs on passing cars, passes a few blocks from President Trump’s childhood home. There are 5 Islamic centers within a little over a mile of where Trump had grown up. Including ICNA.

Hijabs and burkas can easily be spotted on the border of the neighborhood where he used to live. Muslim preachers hand out Korans to passerby and the shadow of terror hangs over Queensistan.

Nafis plotted to kill hundreds of Americans one mile away from President Trump’s former home.

The decline of the borough that once gave rise to Trump and Horowitz into a terrorist enclave is the outcome of the immigration policies that have killed thousands of Americans. And the terror goes on.

That’s why President Trump understands that we won’t stop the terror until we stop the migration.

Slavery, Municipal Bonds, and Healthcare: HOW Are These Related?