NAACP President Jeffrey Dye had a record of threatening his brother with a knife, getting caught with six bags of crack cocaine, assaulting police officers on two separate occasions, so of course he was appointed to work for the New Jersey Department of Labor & Workforce Development. 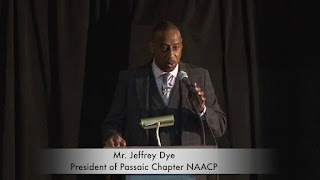 Governor Phil Murphy’s Dem administration had previously appointed Al Alvarez, his guy in charge of Latino and Muslim outreach, accused of trying to rape one of his staffers during the campaign, as chief of staff the New Jersey Schools Development Authority. The last time Dye had gotten in trouble was when he had been charged with aggravated assault after a confrontation with 3 police officers in 2007.

That’s not counting the time he failed to file campaign finance reports while running for public office.

Dye morphed into a perennial Democrat candidate, running and losing one election after another, and headed Passaic’s NAACP chapter. As Rachel Dolezal, a white woman claiming to be black, who headed the Spokane NAACP chapter, showed the organization doesn’t have high standards for chapter leaders.

But Dye met the most crucial standard that the Murphy administration cared about. He supported Phil Murphy. You can be a rapist or threaten your brother with a knife, all you need to do is back Phil.

Last year, Dye’s NAACP announced that it was honoring Marcellus Jackson at its “2nd Annual Freedom Fund Community Service Award Luncheon.” It mentioned that Marcellus, a former Passaic City Council member, was working as a special assistant in the Department of Education’s Office of Civic and Social Engagement. The reason Marcellus was a former member of the Passaic City Council was because the FBI had busted him for taking bribes and he was sentenced to 25 months in prison.

After pleading guilty, Marcellus had echoed General Douglas MacArthur, intoning, “I shall return.”

New Jersey Democrats made sure that Marcellus did.

Dye, who had tried and failed to secure Marcellus’ old position, was honoring the corrupt politician. And the NAACP invitation alerted everyone to the fact that an ex-con public official who had taken bribes was working for the state on a mission to “advance public education in New Jersey.”

“I hope we see a lot more of this, that somebody made a mistake, they admitted it, they repented, they paid their price,” Governor Murphy said, the unconfirmed crook defending his decision to hire a confirmed crook. “We have to get these folks back up on their feet in society and this state.”

If New Jersey hadn’t charitably hired a corrupt politician, he might have starved on the streets.

Instead, Phil gave Marcellus a $70,000 a year job. But perhaps Governor Murphy was hoping that one day a future corrupt Democrat politician will be equally charitable to him.

Mayor Frank Jackson of Cleveland had been very charitable to Lance Mason, another disgraced fellow Democrat, after he violently assaulted his wife. The former judge got a job in the Minority Business Development Administrator for Cleveland before going back and brutally murdering his ex-wife.

“We hire many ex-felons and almost all of them turn out well because we have second chance as a part of what we do as a policy in the City of Cleveland,” Mayor Jackson insisted.

And so back in New Jersey, Jeffrey Dye was working for the state despite a record as long as his arm, which included threatening his brother with a knife, getting caught with six bags of cocaine, which he claimed were someone else’s, and giving the police somebody else’s license after an accident. Then there were the multiple violent confrontations with police officers and stuffing food in a prison toilet.

Despite his plum job, Dye spent his time ranting about Jews and Latinos on Facebook.

He blamed Jews for a hip-hop feud between two black stars, “Jews At it again divide & conquering us.” Under an entry about the New York Times’ 1619 Project, Dye ranted that, “american has no business giving our tax paying dollars to israel to kill palestinians & enslave africans & using both for their body parts.” He also praised racist Nation of Islam hate group leader, Louis Farrakhan.

Dye had also attacked former New Jersey SDA boss Lizette Delgado-Polanco, a union activist and Murphy backer, who was paid $225,000 to head the Schools Development Authority, and began spending money like crazy, firing existing employees and replacing them with SEIU thugs and relatives.

Criticizing Delgado-Polcano in racial terms, who is, despite her departure a key labor ally for Murphy, probably sealed Dye’s fate. But Governor Murphy defended hiring Dye despite his criminal record.

“People, if they make reparations, if they make up for what they’ve done, I’d like to be the state where folks get a second chance,” the Democrat insisted.

Meanwhile pressure was mounting on Dye to resign as head of the Passaic NAACP.

When David Wildstein, a New Jersey Globe reporter, who had closely covered Dye’s case, contacted the former government employee, the Farrakhan supporter snapped back, “I don’t talk to f____ Jews.”

Later, on Facebook, Dye claimed that he had never said that and that it was a Jewish conspiracy.

“The Statement ( “I Don’t Talk To F_____ Jews” ) Is Simply A Lie By David Wallstien Who Is A Jewish Reporter For The New Jersey Globe,” the Democrat perennial candidate ranted. “What You Are Seriously Watching Here Is “COINTELPRO & JEWISH MEDIA PROPAGANDA ASSASSINATION HIT TEAM.”

Following a common trope of leftist bigots, Dye insisted that he was an anti-Zionist who was “Telling The Truth About Israel & The Killing & Murder Of The Palestinian People” rather than an ordinary bigot.

Dye concluded his Facebook rant by warning that, “They Want To Disrupt & Dismantle & Get Rid Of The Passaic NAACP And Me The President. When You Have Any Real Activist That Speaks Like I Do He’s A Threat & Dangerous To Any Racist That’s Trying To Destroy Black & Latino People To Advance Their Cause To Dictate & Control This World.”

Jeffrey Dye’s concern for Muslim rights is surprising though considering that his first altercation occurred back in 1994 when he got into an argument with a Muslim convenience store owner over lottery tickets.

According to media accounts, it concluded when the store owner “allegedly grabbed a machete he kept under the counter, leaped over the counter, and threatened Dye with it.”

It’s unknown if the Muslim store owner with the machete is working for the State of New Jersey.