Being a writer means never knowing what you might be remembered for. Or how badly. 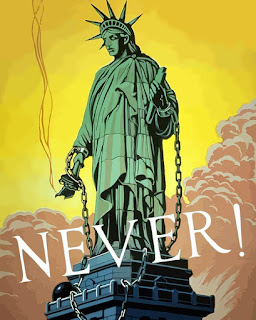 That poem that Emma Lazarus became famous for was forgotten, remembered again, and has been misused, quoted out of context and transformed into a battle cry for open borders and a disastrous immigration policy. Its lines about “wretched refuse” and “poor” immigrants have been taken literally.

And yet the vocal advocates for the poem imprinted on the Statue of Liberty would have loathed the Confederate socialite and the Zionist writer who are responsible for the words they claim to love.

At the age of 34, Emma, a New York poetess with a bad case of writer’s block, was asked to submit a poem for a fundraiser to build a pedestal for a statue that most people hadn’t seen yet.

Her first response was to turn down the request. Though she didn’t know it yet, her life was nearing its end. Five years after she wrote what would become her most famous poem, she would be dead.

But the request came from Constance Cary Harrison, a New York socialite, whose family story was a tapestry of American history, from John Randolph to Thomas Jefferson to Jefferson Davis. Her father was descended from Jefferson, her great-uncle’s godparents had been George and Martha Washington, her grandfather had been the 9th Lord Fairfax and she had sewn one of the first Confederate flags.

Mark Twain had mockingly replied to her request with, “What has liberty done for us? Nothing in particular that I know of. What have we done for her? Everything. We’ve given her a home.”

Harrison was a prolific author, both in her days as a Confederate activist, writing as Refugitta, and a New York grande dame, and she didn’t accept rejections, either from Twain, or from Lazarus. As a teenager, she had lost her family home, her brothers, and her way of life. In many ways, she was also an exile.

And so, Harrison had encouraged Emma to think of the Jewish refugees she had been working with.

Twain’s sardonic comments had gotten at the problem with the Statue of Liberty. Its theme was Liberty Enlightening the World, but what did that mean? Did it mean that Americans were meant to export freedom to the world: a notion that would eventually drive American foreign policy in the 20th century?

That was the vision of some of the French activists involved with gifting the Statue of Liberty to America.

Emma Lazarus hadn’t seen the giant woman who would become the Statue of Liberty, but the obvious reference point for a giant statue in a more classical age was the Colossus of Rhodes. Unlike the ancient Greek statue, the American colossus would match it size for size, but would be female. It would not stand to celebrate a military victory, but to welcome visitors, many of them immigrants, to New York.

By welcoming in people from foreign dictatorships, American liberty would enlighten the world. Not by invading and conquering other countries, but by allowing oppressed people to live freely in America.

The central image of The New Colossus welcoming immigrants though didn’t come from Emma though, but from Harrison, the wife of the private secretary of Jefferson Davis, who as a teenager had lost most of her family, and had spied for the Confederacy in Washington D.C.

“Think of that Goddess standing on her pedestal down yonder in the bay, and holding her torch out to those Russian refugees of yours you are so fond of visiting at Ward’s Island,” Harrison had told her.

It was Emma Lazarus who dramatized it, harnessing the romantic vision, mingling classic Greek references with a modern American take into, “A mighty woman with a torch, whose flame Is the imprisoned lightning, and her name Mother of Exiles.”

The woman embodied the contrast between America and Europe. The Statue of Liberty had been a message from France to America about our place in the world. Emma’s poem, The New Colossus, continued the dialogue, with a response from America to Europe about our idea of liberty.

Emma’s poem has since become a foundational text of liberals, but its origin was with a woman who had sewn one of the first Confederate flags and was first known for her writings for its cause. Harrison, like Lazarus, like the resulting poem though, was more complicated than fans of the poem might like.

Harrison had been as firm an opponent of slavery, as she was a partisan of the Confederacy.

Emma Lazarus was a Zionist, long before the term was common currency, and her preferred solution for Russian Jews wasn’t emigration to America, but to Israel. The New Colossus was not a significant part of her life’s work. It was a favor for a friend. When the poem was read at the fundraiser, it wasn’t by Emma, but by F. Hopkinson Smith, an engineer associated with the Statue of Liberty project.

The poem was written in two days, and made a splash at the time, but was then forgotten, only to be revived generations later when Americans needed a symbol to counteract Nazi Germany. Emma Lazarus would have been deeply disappointed had she known that she would only be remembered for a poem that she had written in two days for a friend’s fundraiser and wasn’t even mentioned in her obituary.

Its revival has focused heavily not on its opening lines, but a few lines before its conclusion, “Give me your tired, your poor, Your huddled masses yearning to breathe free, The wretched refuse of your teeming shore. Send these, the homeless, tempest-tost to me.” The most obvious error they make is to remove the context and read The New Colossus with the painfully literal-minded didacticism of the idiot.

They believe (often without reading it) that the poem speaks of America’s obligation to the world.

But the poem isn’t an idealistic address to the world, but an ironic one to backward tyrannies. By cutting away the opening, “Keep, ancient lands, your storied pomp”, the context and contrast between the “storied pomp” and “wretched refuse” is lost. Only “yearning to breathe free” still suggests that the poem is a dialogue between two different ways of life that is meant to demonstrate how liberty works.

America, The New Colossus is saying, was built by people who came here because they had no place in their old societies. Emma’s message was not that America was an evil imperialistic nation obligated to take in every migrant to atone for its sins, but that it was a free nation built by people who had escaped the “ancient lands” with their “storied pomp” and thrived in a land where they could “breathe free”.

Emma Lazarus instead humanized her into an American figure, a welcoming statue, not an ideal of political terror. Perversely, her poem has been embraced by the advocates of political revolution who see immigration as a means of transforming and overturning the United States of America.

That was the French vision, but it was not the American one. And it was not Emma’s vision.

The New Colossus instead suggests that free societies succeed and tyrannies fail. Like Mark Twain, Emma Lazarus challenged the French presumptuousness of gifting America the Statue of Liberty.

America did not need the statue; it had the reality.

The French had meant for the Statue of Liberty to be a towering ideal, but The New Colossus is more of a sympathetic lighthouse, highlighting America as a place where Europeans can breathe free.

Her Statue of Liberty has no interest in the “storied pomp” of “ancient lands”. American liberty would not be an ideal, but a working reality. It couldn’t be exported because what was truly required was for people to “breathe free”. To be able to live without compulsion and tyranny of one kind or another.

American superiority lay not in abstract ideals about liberty, but in the reality of breathing free. We might take in French immigrants, but we could not teach the French to be free. Only they could do that.

The advocates for open borders don’t believe in people being able to “breathe free”. They take the part about “wretched refuse” seriously because they envision a world in which everyone is reduced to refuse. Likewise, they don’t think of being “poor” as a temporary condition, but as a permanent one.

The New Colossus was an ironic dialogue between America and Europe. Its biggest fans today take the European side, ignore the irony, and want to use immigration to stamp out freedom in America.

Their new colossus of immigration is a conquering giant. It does not stand for liberty, but tyranny.