Sacramento, California – A Republican State Senator in California who once coauthored a vaccine bill, faced a recall effort and division with his own family, expressed remorse last week to parents of vaccine injured children at the state capital. Senator Jeff Stone’s emotional appeal was also directed to his colleagues before they voted on a pair of new vaccine related bills, SB 714 and SB 276.

With the cry of babies and disgruntled parents in the background Stone said, “This issue over immunizations has created major pressures in my own profession of being a pharmacist and pushed me to the limits of being an elected official, trying to balance the two.”

Stone reflected on his past bill, SB 277, that was coauthored with Senator Richard Pan and passed in 2015,  “When we were considering SB 277 it was the time I had my first grandchild. It was then determined at my granddaughters one year birthday she was autistic. It happened at the same time she received the MMR vaccine.”

Stones’ voice cracked this week as he spoke how SB 277 divided his family.

“It created some serious significant friction between my children and myself,” said Stone. “I can’t tell you how much it hurts me to see my son and daughter in-law, to visit my six year old granddaughter who still wears a diaper. She has never held a conversation. When I tell my granddaughter I love you, I would give a million dollars to hear her say grandpa I love you.

“We know today that a human immune system is not fully mature until a child is 12- 14 years old. I  look up and see the incidences of autism in the state and in the country with the immunization schedules we see, the schedules I think may be too erroneous may be too overbearing for a child’s immune system that cause an autoimmune reaction,” said Stone. “We are still learning about the immune system and how it works.”

“The doctor patient relationship is important and something to be respected,” said Stone.

SB 714 interferes with the doctor patient relationship. It will allow the government to start an investigation into any doctor who offers more then five medical exemptions in a year. These inve stigations put at risk a doctors medical license and as a result doctors are not longer offering medical exemptions. Parents are livid because their children’s welfare and health are not being put first. Medical decisions are being made out of fear of the government’s heavy hand. 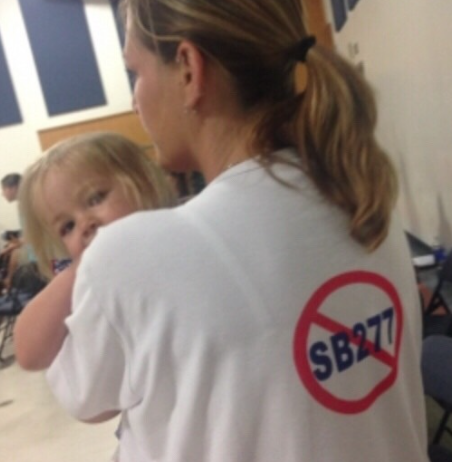 In 2015, when parents stormed the capital against SB 277 they were fighting Stone and Pan together as the two pharmacists who took their parental rights away and were playing Russian Roulette with their children’s health.

On September 9, 2019 Stone took an about face and stood as a voice for the parents of vaccine injured children. He was appalled to learn mothers and grandmothers were being arrested for peacefully protesting.

“Our citizens need their voices heard, that is called democracy,” said Stone who wanted to stop the vote on SB 714 in order to have a public hearing.

“I think it is unfortunate if any of us ever want to vilify those who want a voice in the state capital. I have  heard over the years people who want to have parental rights over their children being labeled extremists, labeled anti vaxxers when there is nothing stronger my friends than wanting the best health and welfare of your child,” said Stone.

Those against SB714 are upset that there is a material change to the legislation that was previously enacted and without a public hearing a “mockery is being made of democracy”.

One of the reasons I supported the measure was because I had a good colleague say they would allow medical exemptions and they would be honored,” said Stone.

Stone told his fellow Senators that SB 714 will prevent children who need exemptions from getting them.

“We were told exemptions would be allowed including myself we made a promise,” said Stone.

The senate voted to wave the rule in the senate that states if a bill was gutted or amended the bill would be heard in public.

Despite the emotional speech by Stone and protests from parents, the democrats passed both bills and they now lay on Governor Newsom’s desk.

Stone wrote on his Facebook page Friday Sept. 13, “I may be in the minority up here, but I have thousands of moms…..throughout the entire state…. empowering me.”

Welcome To The People’s Republic of America, Established 2021