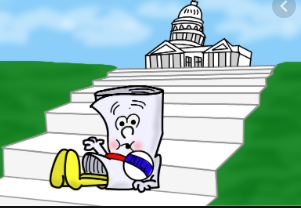 A recent article posted in EdWeek.org brings to light some glaring problems with the definition of “civics” in today’s education system. The article, entitled, What Students Write to the President Sheds Light on Their Civics Learning, presented the system’s bias and advocacy to alter the term ‘civics’ into something that it has never meant before.

Civics should be taught as the study of how our U.S. government systems work together and why it is very likely the best system of government ever devised, in spite of its shortcomings. Instead, civics is being turned into lessons on advocacy for whatever topics teachers (or students!) can come up with that are not receiving “appropriate” attention. A comment made on an included video illustrates a student’s belief that, “…since we are impacted by the things that government does, we should have a voice even though we are not old enough to vote.” No distinction is apparent between the intended division of authority between state governments and the federal government.

There is a reason twelve to sixteen-year-olds do not get to vote. They are still learning and are not mature enough to make sound decisions about complex issues. This becomes even more apparent when one takes a deeper dive into the twenty different topics chosen for their letters to the President.

Of those twenty topics, only Immigration, and the Economy are truly – based on the U.S. Constitution and the writings of the founders – federal issues on which a U.S. President could bring influence to bear.  The other eighteen are either constitutionally protected rights (Guns – 2ndAmendment), or amendments to the constitution (Race/Ethnicity – 5th,14th and 15thAmendments), or state government (and clearly not federal) issues.

“Fairness” is not something that can be legislated. Fairness is a state of mind within each citizen and something like that cannot be forced by any government without imposing tyranny on everyone. It is the difference between “equal opportunity” and “equal results,” the latter being a socialistic doctrine disguised by labeling it as “fairness.”

Yes, there are those on the left that will argue that the federal government should also handle those issues, but those who make that argument are also supporting the push toward social justice, equity, gender equality, LGBT rights, and central control of all aspects of human life. In other words, the socialist viewpoint of the far left.  That, I am seriously fearful, is the sort of ideology that is being spoon-fed to our children daily within the walls of public schools, supported by our tax dollars. It is ludicrous to believe otherwise.

Civics should be about educating and preparing our students for the day when they can exercise their influence at the voting booth. Instead, teachers are training students in activism for every big-government approach ever devised to place more controls on our freedom and more demands for money to support all the things they personally advocate.

The very tone of the article makes it clear that the research (carried out by EdWeek’s in-house research department) focuses on grouping schools and students by race and economic well-being. What they need to do is look at the grade level and the degree of understanding demonstrated in the writings the students produce rather than focusing on what ethnic group or income level to which they belong.  The favorite tactic of the left is to divide the population into the “haves” and the “have nots”, the “whites” and the “people of color.”  Nothing else matters because to consider other anything else doesn’t fit into their agenda of “divide and conquer.”  The fact is, facts don’t matter to those who are committed to socialism and the included buzzwords.

What is most distressing within this “research” is that there are four categories listed as topics of letters written that should all fall under the heading of Education. The most glaring example of federal over-reach is a creation of leftist President Jimmy Carter’s administration in 1970: the Department of Education. It is a $60 Billion waste of money on something that was, prior to that time, completely within the purview of the individual states (as the constitution clearly does not confer any such responsibility on the federal government).

The only letters written to the federal government about education should be demanding that Congress defund and close down the entire Department of Education. This would save tax dollars that could be returned to the taxpayers instead of being wasted on bureaucracy that serves no other purpose but to squeeze 51 state/district school systems into a one-size-fits-all mold that cripples public education.  Somehow, although the report does not indicate, I doubt many of the student letters to the President advocate such an action.

The most encouraging aspect of the report was that Climate Change has fallen into the least important slot, with the fewest letters written on that topic.  Perhaps the science teachers are doing a better job at telling students the truth than the civics teachers, that Climate Change is not caused by anything mankind has control over and the earth will not be destroyed in twelve years.

The fact that so many letters are written on topics that should be written to governors instead of the President points to the failure of civics education in America.  Students have no idea of why we have the constitution and what it was intended to do – to protect them from the government’s interference in their lives. No clue at all.

My only suggestion to parents?  Home-school, parochial school, private school.  Save your children…now!