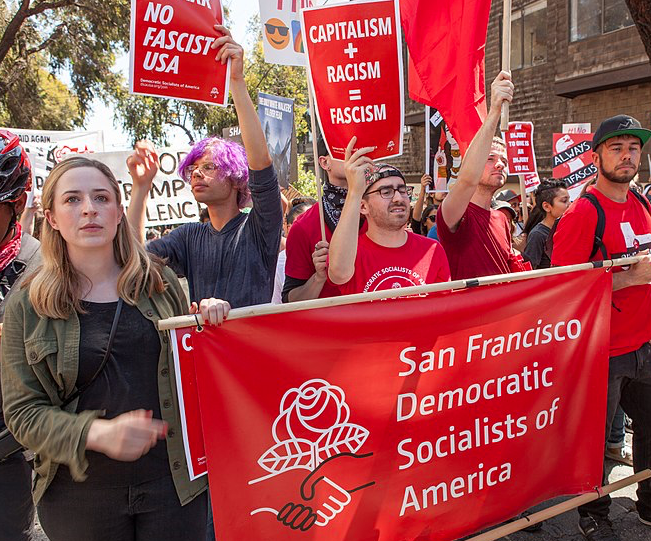 If there was ever any doubt, a new Monmouth poll shows the Democrat Party has finally become the Democrat Socialist Party.

The poll, out August 26, shows that both Elizabeth Warren and Bernie Sanders have surged against Joe Biden. Actually they’ve moved ahead of him by 1 percent. Warren and Sanders each receive 20% of the vote, Biden gets just 19%.

To me, the significance of this poll is that it finally confirms what conservative observers have seen coming for miles — the two farthest left candidates in the field now receive twice as many votes as the very liberal Joe Biden. He’s at 19% to their combined total of 40%!  Add in the other socialist leaning candidates who arguably qualify as distinctions without a difference, and Democrat preferences for a far left candidate exceed 60%. The total for Booker, Buttigieg, Castro, Williamson, and Harris, comes to another 21% of Democrats.

Yes, my claim that Biden is “very liberal,” defies the pundits’ claim he’s the great savior who will draw Democrats back from the far left cliff.  That’s rediculous.   Biden has largely staked his candidacy on the fact he served as VP to the most liberal president in our history, Barack Obama.  Since entering the race, he’s moved to the far left on one issue after another — in fact, compared to Biden, Obama is starting to look like a moderate.

Those who call Biden moderate are saying far more about themselves than they are Biden.  Only from the vantage of the far left could Biden’s $6 trillion Green Deal look moderate. Or taxpayer funding for abortion, or his proposed trillion dollar expansion of Obamacare, or free health care for illegal immigrants.

And in the same way Maduro’s socialists wrecked Venezuela, so Democrat leaders in the U.S. are now promising trillions in free stuff with virtually no serious conversation how the tab will be paid.

In fairness, Bernie has admitted he’ll raise our taxes to pay for his Medicare-for-All scheme.  But he won’t tell us how much.   Warren, on the other hand, simply keeps promising one big spending government plan after another with no apparent concern from whence the revenue will come except to suggest the wealthy will pay.  It too is insane.  In fact if you combined all the profits businesses in America make, it wouldn’t raise enough to pay for even a fraction of her or Bernie’s proposals.

And neither they, nor any of the other candidates, will address just how massive the hit will be to our economy should Democrat candidates get their way. Businesses will close their doors or leave the country.  Families will lose their jobs in record numbers.  Investors will move off-shore. Production will fall off, prices will rise, and families will suffer and suffer terribly.

Never mind that Trump’s tax cuts and regulation reform have led to the highest employment for blacks, Hispanics, and women ever recorded in our history. Or that losing those tax breaks and restoring those regulations will take us back to where we started.  Or worse, the new spending, new taxes, and new debt they propose will wreck our economy and hurt millions of families.

Never mind that even with Trump’s tax cuts we’re taking in more revenue today than we did during Obama’s oppressive high tax, over-regulation regime.

The truth is that radicals like Warren and Bernie think they know better how to spend OUR money. Give each a shot of truth serum and they’d claim it wasn’t actually our money anyway, it belongs to the government.  They believe they should decide who gets what.

And it doesn’t end with a punitive tax bite. They’ll say that’s for health care. But don’t forget the higher fuel costs, new federal tolls on top of state and local tolls, and new federal surcharges and sales taxes on everything that moves (and many things that don’t.)

The Monmouth poll makes clear that should Warren and Sanders join forces, one of them would have more than enough votes to win the nomination. Biden’s political days are numbered. Once Warren and/or Sanders consolidate the left, Biden will be an also-ran. And the Democrat Party will become in name what we already know it is, the party of Democratic Socialism.

When that happens we have to pray not just that they lose this election, but that they are embarrassed by the size of their loss. Unless the Warren-Sanders brand of socialism is absolutely and overwhelmingly rejected, it will eventually be back.  Worse, given the state of knowledge about economics among our young people, it will eventually win.