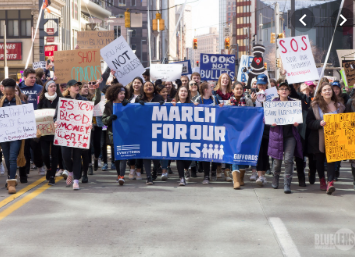 The March for Our Lives, likely supported by Every Town for Gun Control, has come up with a doozy!  One of these misguided children referred to it as the “Green New Deal, but for guns.”

Among the many demands of this latest effort to stop private ownership of firearms within the borders of the United States are some that are outlandish, others that are abusive of honest, law-abiding firearms owners, and a few that point to the end result the pawns of the left are really seeking.

This one is both a favorite of the left but is never defined since a large majority of firearms transfers are already conducted through the NICS via licensed Federal Firearms Dealers (FFL) – including most notably transfers that take place within the confines of a public gun show.  You see, even when non-dealer exhibitors want to transfer/sell a firearm through a booth at a gun show, they must employ the services of an FFL to complete the transfer.  Therefore, the purchaser or transferee undergoes the standard federal background check.  In most cases, an FFL is paid by the show’s management to be available on the premises to complete such transfers and process the NICS check and accompanying paperwork.  Even through a number of existing internet web sites that advertise firearms for sale or trade require that anyone selling through the site ship the firearm only through and to an FFL at the buyer’s location.

What more do they want? In reality, what these groups want is for a father who wants to transfer his childhood squirrel gun to his son or other relative to go through a dealer to hand it over even if no money changes hands. What these groups want is to require every transfer of a firearm from one person to another (even, in some cases when the transfer is only a temporary transaction to allow someone to use one’s firearm for a hunting trip or a trip to a shooting range.

But the end game is actual registration of every firearm in the country in a federal database so that the government knows who has firearms and where they are located.  Registration is also part of the proposal, but it is paired with a licensing requirement that both jacks up the costs of acquiring a firearm beyond the means of the average Joe and ensures that all the information about the owner is readily available when the government decides that the next step should be a confiscation effort to prevent any civilian from ever owning a firearm again.

Far fetched, you say? Hardly. History demonstrates that when the government knows who owns a firearm, it is relatively easy to rid the population of their arms in no time at all. Look no further than Hitler, Pol Pot, Hugo Chavez, Maduro, Mao Tse Tung, the Kim family, et al. for perfect examples.

The proposal also calls for a multi-step approval process for gun ownership that includes in-person interviews, personal references, “rigorous gun safety training, and a waiting period of ten days for each gun purchase.

Out of one side of their mouth, these juvenile tools of the left are calling for limiting purchases of firearms to one per 30-day period, while simultaneously demanding “higher fees on bulk firearms purchases”. Huh?

These inglorious demands are topped off by proposing that the many and voluminous fees tied to the many aspects of trying to own a firearm be used to “address gun violence.”

Most amazing among the many demands of this “Green New Gun Deal” is that not a single one would have any meaningful impact on mass shootings – the purportedly singular purpose of all the aspects of this proposal.

The only thing that this “deal” will provide is benefit to those in power for collecting the firearms of its citizens when the time comes that the leftists gain control over both the Legislative and Executive branches of the federal government.

What I would love to hear from these useful idiots is which, if any, of their number has any idea how any of these measures they are suggesting do not infringe on the constitutional right to bear arms.  The Second Amendment is quite simple.  The second clause states the right very clearly (emphasis inserted): “…the right of the people to keep (in their possession)and bear (carry)arms shall not be infringed.”

Any arguments regarding the clause are ended here:

Our 2nd Amendment rights been clearly answered by Supreme Court decisions like Heller and McDonald. They do not limit private ownership of firearms in any way while requiring that the amendment is enforceable on the states as well as federally.

So we know their purpose in making these ridiculous demands. The only question remaining is whether or not we, as law-abiding citizens, will allow our representatives in Congress to violate their oath of office and freely pass such unconstitutional laws to the detriment of freedom and our constitutional republic. Or will we demand of them strict compliance with what is considered the supreme law of the land.  I will choose the latter.

Can The Past Help Write The Future?