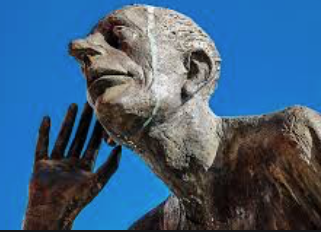 Let’s be very clear. The shooter who rampaged through an El Paso mall over the weekend in the name of white nationalism was a deranged psycho.  The governor is pushing for the death penalty. He should.  This event is beyond tragic. I grieve with every family who was hurt or effected – legal or illegal; brown, white or black. I pray they will know God’s presence in their loss and that He will comfort and care for them.

That kind of hate has no place in America: NONE!

But let’s also be very clear that the Democrat left who want to turn this into a political opportunity to ban guns, or embarrass Trump, or advocate for open borders are way off base.  No matter their favored fall-guy; the truth is this attack was carried out by a very sick, demented, evil person.

This shooting wasn’t done by Donald Trump, or the NRA, or by the police; they didn’t encourage it, their political positions didn’t make it happen, and from what I’ve seen there is zero indication any of them are happy about it.  The person responsible for this act of terror and hate should have received attention for his mental health issues long ago.  I don’t know if that would have prevented this horror, but maybe.

For the record, I am white, I am for the wall, I support Donald Trump, I am a member of the NRA, and I legally own guns.

And I would never do what this maniac did. Nor would those among my friends, family, or acquaintances who share my politics. None of us are white nationalists, racists, or haters.

We want to fix our immigration problems not so migrants will be hurt, but for the sake of those who are and will be hurt until we do.

I’m talking about those who live in neighborhoods ravaged by gang violence, drugs, and human trafficking all made worse by violent criminals who sneak in among the ranks of illegal migrants.

I’m talking about those in this country; whatever their age, color or gender; who are unfairly disadvantaged by the cheap labor provided by illegal immigrants; and about the migrants themselves who are often exploited by unscrupulous employers.

I’m talking about taxpayers who put out more than $150 billion per year to provide healthcare, education, food stamps, and other free services to illegal migrants while pressing problems like mental health go unaddressed. That number is growing rapidly as a flood of migrants continue crossing our borders illegally.

I don’t know for sure whether it would have stopped this particular maniac from his senseless killing, but I do know that if Democrats in Congress had done the right thing for their constituents and produced immigration reform before now, everyone would be far better off.  If Democrats had funded the border wall, sped up vetting for asylum seekers, put more agents on the border, provided judicial reforms that allowed illegals to be deported, and funded adequate facilities for housing and caring for detainees; then just maybe this issue would not have turned into the kind of crisis it has – one that fuels frustration and causes the extremes on both sides to say and do crazy things.

I founded and currently chair a group that every day fights for minority rights to equal opportunity and access, more freedom, better schools, and a better life. We are constantly at work and and we’re making progress. But those on the left only seem to smear conservatives, distort our efforts, and advance policies that will hurt rather than help minorities gain more opportunity. I honestly think they don’t care if they burn down our country so long as they’re the ones standing on the rubble at the end.

There are millions of Americans just like me. They are black or brown; born here or immigrated legally; minimum wage workers or neurosurgeons; gay, straight, or undecided; Jewish; Catholic; Buddhist; or Muslim.  But they all have one thing in common. They are Americans who love their country and detest the left’s constant attack on the values that made it great.

And all of this started with Barack Obama and the politics of division.

Obama knew the way to keep his promise to “fundamentally change America” was to divide our people.  Pit rich against poor, minority against majority, young against old, job creators against wage labor,  flag waver against flag burner, Wall Street against main street, blacks against cops, Muslims against everyone.

When our politicians ignore the legitimate needs of America’s citizens in preference to free services for those here illegally, large groups of Americans get frustrated. Like millions of others, I’m frustrated.  Frustration is probably the normal outgrowth of Democrat policies that insist the safety and well being of their fellow citizens be put on hold while our culture is threatened, the safety of our families is ignored, and our taxes are diverted from serious needs to provide free stuff for illegals.

Congress needs to cut their 6 week vacation short and get to work recasting their priorities. Fix our immigration problems. And make our mental health system a higher priority than free health care for illegal immigrants. Mental health is one of our nation’s biggest problems. It’s literally killing our people. Fixing it will go a long way toward curbing tragic events like we witnessed in El Paso.