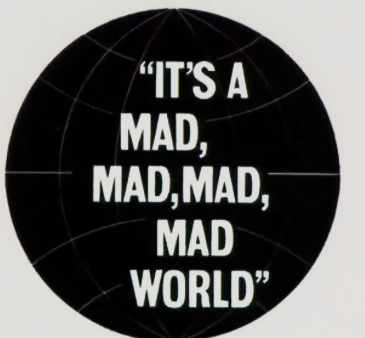 A 1963 movie with some of the best and funniest that Hollywood had to offer entertained audiences for decades. It’s an around-the-world-treasure-hunt that delivers lots of good humor and some real laughs.

Now, in 2019 it’s still a Mad, Mad World, but in a different way, and there’s nothing funny about it.

U.S. Senators, journalists, academicians, and a wide assortment of pundits, celebrities, and thumb-suckers call the President of the United States ‘racist’ with zero proof or documentation. Apparently, they use that slur because he’s trying to  obey the law by controlling the entry of those who want to cross our border illegally. He also insists those suspected of terrorism, drug trafficking, or violent crimes like murder and rape, not be allowed in. How in the hell does that make him a racist?

Certain Members of Congress call on people to harm anyone who supports or works with the President for absolutely no reason other than they don’t like him.

The two newest Muslim members of Congress have let loose a profusion of anti-Semitic vitriol; called for boycotts and divestment against Israel, our best ally in the Middle East; and championed the leaders of radical Islamic groups like ISIS.  One of them called Trump a motherf*cker.  The other said about 9/11, “some people did something.”  The “some people” were Islamic terrorists, the “something” was murder 3,000 innocent people. They both remind us constantly they hate America, claim the rest of us are racists, want to throw open our borders, and support the elimination of Israel.

Now Democrats are in a feeding frenzy over the rampage by a mad man in El Paso that left 21 people dead.  They blame Trump because the assailant was a so-called “white supremacist”.  What they don’t tell you is that he was a white supremacist who expressed socialist views. They don’t generally mention Dayton where 9 people were killed at the same time, because they’d rather you not know that shooter was a supporter of radical Democrats Elizabeth Warren and Bernie Sanders.

And they won’t tell you that immediately after the El Paso shooting, Trump condemned white nationalism, urged Americans to resist any and all racism, supported the death penalty for mass murderers, called for mental health reforms that would help those like the El Paso shooter get help and bar them from getting guns.

None of his critics, by the way, have suggested anything more than what the President called other than radical proposals that are either completely unconstitutional or if enacted would have made a bit of difference in stopping either shooting.  Oh sure, some of them want the confiscation of guns and the total suspension of all gun rights, but that’s not real.  There’s this pesky addendum to the Constitution call the Bill of Rights they’d first have to repeal.

The madness doesn’t stop with calls to suspend the Constitution though.  Our Mad, Mad World continues with ALL of the Democratic candidates for president urging we give illegal immigrants free health care.  Of course, “free” doesn’t really mean free at all; it means they pay nothing while you and I pay higher taxes to pay for their freebies.  And it’s not just health care.  They also want to provide free education, food stamps, housing, welfare, and even tax credits whether they’ve paid anything in taxes or not!

In today’s Mad, Mad, World, Democrat Committee Chairs in the House of Representatives have ramped up massive new probes into the President on nearly every subject despite the Mueller Report finding absolutely nothing after nearly 3 years and some $25 million in costs. Still Democrats insist he must have done something wrong because he won an election he should not have won and, well, they just don’t like him.  Despite hounding Trump and his administration though for nearly a year, they still have nothing, nada, zero, ZILCH!  No evidence. No proof.  Nothing but animus and ill will.

The 2019 version of Mad World features 20 progressive Democrats slugging it out to be the one person left standing against Donald Trump.  The truly wild thing though is rather than try to appeal to Americans who might be willing to vote for a reasonable alternative to Trump, they’re all doing everything possible to prove how Unreasonable they can be.

In fact, each of the main candidates is now engaged in a bidding war to prove who can promise the most amount of money to the greatest number of people:  1) free stuff for illegals 2) pay offs for minorities 3) more welfare for people who choose not to work 4) and total forgiveness for people who borrowed money, promised to pay it back, and now don’t want to.

None of them have mentioned how they intend to strengthen American security,  pursue new initiatives to keep the economy strong, reduce a $22 trillion federal debt, raise America’s standing in the world, improve our trade relations, give hurting families more and better education options for their children, prevent our Medicare and social security systems from defaulting, or solve any of the other dozen or so problems our country faces.

And in today’s mad Mad, Mad World, Hollywood has outdone itself.  Netflix is releasing a new documentary about Alexandria Ocasio-Cortez, nauseating in its nod to emotionalism over reason.  And, in another Hollywood release, socialist elites hunt down, torture, and murder those who prefer a system other than socialism, Hillary’s deplorables. Nice. Not many giggles in that flick.

There is little doubt that if the Hollywood elite, the media elite, and the socialists in government get their way there will be nothing amusing about the ending of today’s Mad, Mad World.

They exchange individual dignity for government bureaucracy, freedom for central control, personal responsibility for state mandate, and equality of opportunity for dictated outcomes.  In the end, we’ll all be impoverished, miserable, and controlled.

We’re already seeing how the socialist mind has worked to turn the central mission of public education from knowledge for indoctrination.

Fortunately there are still those who reject the current Mad, Mad World.  They prefer a Sane, Sane World.  In that world, government works for people rather than the reverse; we again prize laws everyone must obey no matter who they are; freedom is cherished and dignity is respected; and common sense rules.  Rather than government control, the economy sizzles with growth and opportunity for all.

A Sane, Sane World might not be a movie of belly laughs, but there’d be plenty of smiles. And that’s enough.

Daniel Greenfield: Nationalism and Idealism at the Border