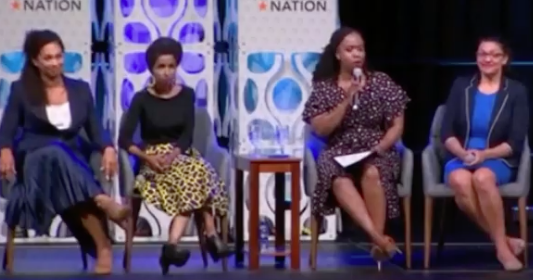 Our newest Muslim members of Congress, Ilhan Omar (D-MN) and Rashida Tlaib (D-MI), have dominated the media recently with their hysterics over Israel’s refusal to let them enter the country.

It’s important to know that Omar and Tlaib had the chance a few weeks ago to visit Israel with a group of both Democrat and Republican members of Congress.  The trip they passed on happens every two years so America’s leaders can meet personally with Israel’s top leaders.  And so they can see the incredible commitment Israel has to democracy, freedom, and the United States.

Omar and Tlaib weren’t interested in a bi-partisan trip to actually learn the truth about Israel, it’s enemies, and U.S. interests in the region.  So instead they chose to accept the invitation of a pro-terrorist, anti-Israel group to sponsor and pay for their trip.

They made it clear too that the reason for their trip wasn’t to learn anything, it was to advocate for the boycott Israel cause – a cause that were it successful would mean the end of Israel.

It is no secret these two women have spent their first year in Congress blaming the Jews for many of the world’s woes, and for nearly all the problems in the Middle East.  The problems Israel isn’t responsible for, the United States is, according to their rants.  Their anti-semitism is plain.  Everything they do with respect to foreign affairs is designed to end the state of Israel and boost the cause of Palestinians.  Tlaib does more than salute the Palestinian flag figuratively, she flies an actual Palestinian flag outside her Capitol Hill office.  And that, despite the fact, there is no country named Palestine.

So is it any wonder Israel refused to allow Omar and Tlaib into their country so they could screech for Israel’s destruction? Would we allow an ISIS spokesman to tour our country chanting “death to America, death to Americans?”  Well, now that you mention it, there are many Democrats in Congress who very likely would do that.  But we shouldn’t.

But these two women — and the rest of the Democrats in Washington who are now attacking Israel and defending these anti-semites – don’t see it that way. They think that since Americans elected them to Congress, that gives them the right to break the laws of other countries and enter any time they want.

Media outrage at Israel’s refusal is totally phony. The outrage of Democrats at Israel is phony.  And the outrage by all the left elite at Donald Trump for applauding Israel’s decision is utterly ridiculous.

None of the politicians, celebrities, and journalists currently whining would  welcome a terrorist into their homes if it was clear the terrorist intended to take their lives or harm their families.  You wouldn’t do that any more than I would.

What shocks me is how the entire Democrat Party is rallying around Omar and Tlaib.  Democrats have clearly cast their lots with the anti-semitic, anti-Israel crowd right alongside the neo-Nazis, left wing BDS’ers, and terrorist crazies.

It seems foolish to me Democrats would align with these radicals. It makes them look bad and causes rank and file Democrats to worry their party has left them behind as it lurches to the far left.

But that’s where the Democrat leadership is headed these days.  It’s not only foolish, it’s stupid and dangerous.

The Anti-2nd Amendment Gang is At It Again