When a company runs into trouble, it tries to go forward or backward. And when Banana Republic faced a 3% decline in sales, it decided to go all the way back to the 7th century. Hoping to tap into the lucrative market of concealing bruises and strangulation marks, Banana Republic rolled out a line of hijabs for the discerning woman who knows better than to leave home without the permission of a male guardian. 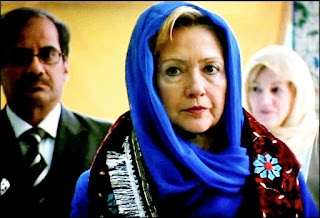 While women in Iran were being beaten and imprisoned for taking off their hijabs, Banana Republic decided to celebrate the courageous spirit of those women who want to live as second class citizens.

But if the Gap brand thought that displaying some garments of female subjugation between its ugly purple purses and its eighteen-dollar scrunchies would win over Islamists, it had another thing coming.

Modern lefties iconize hijabs without having the faintest idea of what they mean or what they’re for. All they know is that to properly display diversity, you need to add a woman in a hijab between the gay guy, the Black Lives Matter guy, and the militant #resistance member ready to storm Starbucks; even though a hijab is as much a symbol of human liberation as a case of female genital mutilation.

But since Banana Republic couldn’t figure out how to market female genital mutilation to sophisticated urban consumers, it had to settle for trying to sell them hijabs. A hijab, BR execs thought, is just a 72×26 shmata. Our Vietnamese slave laborers can make one a minute before passing out from the toxic fumes. And we can sell them for 20 bucks while getting a diversity award from CAIR for our wokeness.

A cigar may sometimes just be a cigar, but a hijab is always a repressive way of life.

Instead of being cheered from Algeria to Afghanistan, Banana Republic was accused of cultural appropriation and insensitivity. The failing retailer had made an obvious and tragic error. Their model may have had every lock of hair encompassed by the fashion forward follicular prison, but she was showing off her elbows in a short-sleeved shirt. What’s the point of locking up the hair after the elbows are already out there? Does Banana Republic, despite its name, understand nothing about Islam?

“There are guidelines to hijab outside of just covering hair,” the founder of Haute Hijab warned.

The guidelines of Islam cover women’s hair, elbows, sometimes faces and even one eye. The hijab is the most distinctive sign of subjugation, because hair is even more offensive than elbows.

The model in the black rectangular hijab print and the short sleeves vanished from Banana Republic the way she had from the republics of Afghanistan, Iran and ISIS. The very woke company replaced her provocative elbows with a cropped shot in which she no longer has elbows, arms or hair.

But Muslim critics pointed out that the model in the blue soft satin square hijab has an exposed neck. And Allah is no more fond of the sight of women’s necks than he is of their hair and their elbows. Meanwhile the model in the unconvincing leopard print hijab is not only showing her neck, but has the first two buttons of her shirt open. The only thing more offensive would be is if she were also driving.

Banana Republic had banished the model with the dress slit below the knee, but it couldn’t keep up with the frenzy of demands for erasing all the parts of the female body whose existence Muslims object to.

“If people were on the fence about the short sleeves or exposed neck photos, no one could get behind the dress slit photos,” Melanie Elturk, the founder of Haute Hijab, complained.

An American brand that claims to tap into the liberating power of fashion bet big on subjugation and discovered that no amount of subjugation is ever enough. The hijab is not just another twenty-buck shmata. Its origins go back to 7th century Arabia where Mohammed faced the same problem as his modern ISIS counterparts. He had to figure out how to tell apart his wives and his rape victims.

The Prophet Mohammed (PBUH), like the Prophet Jeffrey Epstein (Prison Be Upon Him), sought to colonize the world with miniature versions of himself by capturing and raping innumerable young girls. Since the Florida Democratic Party did not exist in 7th century Arabia, Mohammed couldn’t just write a check to the Clinton Foundation, and instead had to recruit a gang of rapists with promises of rape.

A famous PBS documentary refers to this period as an Empire of Faith.

Since the various rapists also had wives, and since Islam frowns on Muslim men assaulting each other’s wives (the wives of non-Muslims however are fair game, as Koran 4:24 states, “And all married women are forbidden unto you save those captives whom your right hand possess”), the hijab, the burka, the abaya and all the other exciting ways to repress women arrived.

“O Prophet! Tell your wives and your daughters and the women of the believers to draw their cloaks all over their bodies that they may thus be distinguished and not molested,” Koran 33:59 states.

A commentator on the Koran adds, “It is more likely that this way they may be recognized (as pious, free women), and may not be hurt (considered by mistake as roving slave girls.)” It’s always awkward when you confuse your wife, or somebody else’s wife with one of those roving slave girls.

Muslim women cover their hair and elbows to show that they’re the property of a Muslim man. Banana Republic had gone into the business of selling twenty-dollar social markers distinguishing their wearer as already belonging to a Muslim husband or father, and suggesting that he go “molest” someone else.

Maybe the purchaser of that Banana Republic purple purse who left her elbows shamelessly exposed.

The media can’t exactly fault the Old Navy’s cousin for advertising hijabs in a way that sends mixed messages to sex grooming gangs, so it instead threw out accusations of cultural appropriation.

Islamists had spent a generation whining about a lack of accommodation and representation. Restaurants weren’t open around the clock to break the Ramadan fast. Victoria’s Secret wasn’t hiring models in burkas. The police still treat synagogue bombings as a crime no matter what the Koran says.

And then Banana Republic debuts four hijabs and it’s cultural appropriation even though Islam appropriates cultures the way hot dog eating contest winners go through sauerkraut and brats. Huge chunks of the Koran are appropriated from Judaism and Christianity like a little kid trying to write his own comic book by taking all the best parts of all the books and movies he saw and mixing them up.

The Texas resident said that it is, “where my loyalty lies.”

The question is where do the loyalties of the huge corporations which collude in the oppression of women lie? Is it with the women risking their lives to defy oppression or those who collude with it?

Banana Republic tried to collude with a theocracy of rape and discovered that no amount of erasing women is ever enough. And that’s a tough lesson for an American clothing retailer to absorb.

But when BR next relaunches its line of oppressive headgear, it’ll bring in CAIR advisers who will make sure that none of the models are showing any ankle, elbow, neck, or hair. And then the media will cheer. And there will be awards and an ad campaign.

Because we all live in a banana republic now.

How to Tell If a Dem Candidate for President Is Lying? (Moving Lips...)

Child of the 60’s Asks: What’s Going On With the Democrat Party?