A Russian Communist painter spent decades defacing San Francisco with ugly social realist art. The son of a Russian Orthodox priest who had left his faith and found a new one, Victor Mikhail Arnautoff depicted a world of stolid ugliness, of shapeless men and women crowding a foreshortened world. 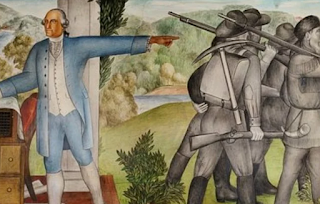 Arnautoff did not like America. And he was a bad painter. His people are soulless representations of an objectified working class. No one smiles in these murals. They occasionally frown and grimace. Their world, like the people in it, has no dimension or depth. Even the revolution will not save them. Only transform them from one type of routine into another in a hopeless world without beauty or meaning.

To social realists like Arnautoff, people were a type of machinery. Society was a factory. Human bodies were just lumpy misshapen industrial architecture. Life was work and work was a struggle.

But the WPA era was a golden age for leftist muralists whose ugly social realist art still scars buildings and lobbies across the country. The Federal Art Project littered Marxist dogma across countless government buildings, often encoded into murals of Washington, Lincoln, and other great Americans.

Arnautoff had assisted Diego Rivera, but his own murals were, until now, far more obscure. And the mural whose fame outlived the Communist, who died in Leningrad in the 70s, had been painted on the walls of an American high school. Generations of high school students had passed it without caring.

When Victor Arnautoff took on the job of depicting George Washington’s life for the walls of George Washington High School in San Francisco, he mixed his usual bad style with anti-American dogma. The Communist Party member depicts Washington as a slave owner and a murderer of American Indians. His America was an imperialist nation built on the oppression of minorities and exploitation of workers.

Arnautoff moved to the Soviet Union in the 60s after being investigated by the House Unamerican Activities Committee. He continued to produce ugly but unknown murals in the USSR.

And then modern identity politics leftists, to whom Arnautoff was just another dead white man, noticed the George Washington High School murals and decided that they were racist and must be destroyed.

After a vote by a San Francisco school board, $600,000 will be spent destroying the anti-American mural.

The irony of a Communist artist’s anti-American art falling victim to contemporary anti-American activists shows that even long after Stalin’s death, the purge of Soviet artists still continues. The battle over the mural has pitted old lefties, who understood what Arnautoff was trying to accomplish, with a new generation of identity politics crybullies who monetize their brand by crying about their trauma.

Old lefties have begun pursuing a ballot measure to save the mural.

At an ILWU meeting, celebrating Arnautoff ‘s participation in the labor movement, a small group of young lefties took the meeting hostage to protest the mural, while elderly lefties shouted, “Shame” at them. The sight of scraggly bearded reds in open collar shirts practically weeping as a new generation of cultural revolutionists refused to listen to their explanations of the mural was tragically hilarious.

The revolution was not only devouring its own children, but even its own grandparents.

Here was a HUAC martyr being unthinkingly dismissed as a white racist because he had depicted Washington as a slaveowner and Indian killer, without understanding that was his whole point. San Francisco’s ILWU, an organization with deep Marxist roots, was fighting #PaintItDown, a group of middle-class women in the education industry, chanting about decolonization and cultural trauma.

The ILWUers depicted the #PaintItDown protesters as “rightists,” and Willie Brown, the former San Francisco mayor, compared them to Trump supporters, but both are radical lefties. The mutual incomprehension and hostility just show a culture clash between two ideological generations.

The ILWU speaks in the hoary language of class warfare. It venerates a radical history going back over a century. To #PaintItDown, the history of a white labor movement is irrelevant. What matters are the voices of minorities. And some of its loudest white women claim Indian descent, making them indigenous. While everyone else in the country, including the elderly Marxists, are “settlers.”

To the elderly radicals reciting the tales of ancient strikes and protests, the angry lefty soccer moms are bourgeois rightists, and to the anti-mural protesters, the ILWU’s lefties are a bunch of white settlers.

And the future does not belong to elderly Marxists, but to hashtag social justice activists.

The Nation, whose history goes back to the days of the Arnautoff mural and beyond, betrayed its comrades, and took the side of the middle-class teachers, therapists and social justice soccer moms.

San Francisco school board President Stevon Cook compared supporters of the mural to “defenders of the confederate flag or those who fought to keep up the prominent statue of Robert E. Lee.” Suddenly, a Communist artist was Moses Jacob Ezekiel and the ILWUers were the Daughters of the Confederacy.

Cook probably hates America no less than Arnautoff did. At his first board meeting, he jettisoned the Pledge of Allegiance for a Maya Angelou quote. To the mural’s defenders, history matters. To its opponents, the past is irrelevant. Not just the past embodied by George Washington, but also the one embodied by Victor Mikhail Arnautoff and the aging Stalinists watching faded filmstrips of the USSR.

Lefties never seem to grasp that destroying everything about America means their own destruction. They thought that the revolution would mean destroying the White House, the Chamber of Commerce, the Bank of America, the Constitution, bourgeois values, marriage, and golf courses, but would leave their world of radical bookstores, cafes, history books, concerts, murals, and positions intact.

Now in San Francisco, the revolution has come for them.

“I just wonder how some of our local residents who claim to be progressive, yet still advocate to keep the mural, are feeling when they see the likes of the National Review and Tucker Carlson come to their defense,” Cook wrote.

He has a point.

The true progressive has no past. Like a figure in a social realist mural, he is trapped in a dimensionless present which he cannot escape except by dreaming of an impossible utopian future. Even the Marxist with the scraggliest beard has a conservative streak. There is some part of the past he would preserve.

When Marxists fight to preserve the past, they are conserving something. They are being conservative.

Socialism demands the elimination of property, and yet there is always some trinket that the collectivist clings to, that he hides away, because it makes him human. The right side of history mandates the destruction of the past, but the men and women who fought for utopia cling to the past because it gives them meaning. We are only as human as we distinguish ourselves from the collectivist leftist herd.

Toward the end of his life, Victor Arnautoff returned to the Soviet Union where he drew pictures of Vladimir Lenin and Felix Dzerzhinsky, the monstrous founder of the Communist secret police. He continued producing school murals depicting an idealized Communist utopia. Many did not survive the fall of the Soviet Union a decade after his death. Even in the USSR, his style had become antiquated.

Arnautoff claimed that art was only as legitimate as its “social” purpose. But leftist social politics is always changing. Beauty and truth endure. There was neither beauty nor truth in Arnautoff’s work.

It was always doomed.

The story of Arnautoff’s mural is not that of George Washington. It is the story of a destructive political movement that destroys itself. The Left likes to claim the future. But, like Arnautoff, it has no future.