Even within the United Nations, a sprawling multinational bureaucracy linked by luxury dining, corruption and complicity in terrorism, the UNRWA stands out for waste, corruption and terror.

The UNRWA’s abbreviation leaves out its full title, United Nations Relief and Works Agency for Palestine Refugees in the Near East, and its heavy focus on Gaza. The UNRWA classifies 1.4 million or 73% of the people living in Gaza as “refugees” even though it’s an independent territory run by Hamas. 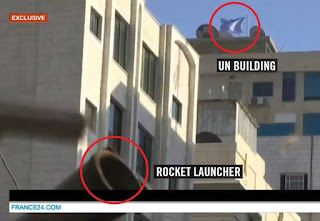 There are really two UNRWA agencies. One is a UN agency run by a small number of international staffers. Another is an arm of Hamas which employs thousands of “Palestinians”. Many if not most of these are members of Hamas. Some, like Suhail al-Hindi, the former head of the UNRWA union, who was also a member of Hamas’ leadership, serve in the upper echelons of the terror group.

While a handful of European UN employees act as the public face of UNRWA, the actual agency is run by Hamas operatives who control its schools, using them to recruit and to store weapons. The union representing UNRWA employees is controlled by Hamas and its employees implement Hamas policies.

Hamas had announced as much when its newspaper responded to a call to fire UNRWA Hamas members by writing, “Laying off the agency employees because of their political affiliation means laying off all the employees of the aid agency, because…they are all members of the ‘resistance.’”

The power struggle between the UN employees and Hamas was tested before during clashes over the teaching of the Holocaust in UNRWA schools and the use of UNRWA schools to launch attacks on Israel.

The real crackup came when the Trump administration cut off all funding to UNRWA.

On a Rosh Hashana call, President Trump told Jewish leaders that the free ride for terrorists was over.

UNRWA leaders had reacted to the cuts by announcing that 250 employees in Gaza would be let go. Hamas UNRWA employees then seized control of UNRWA facilities and banished the international staff.

Mahmoud Zahar, the co-founder of Hamas, who had once declared that the Jews had “legitimized the murder of their own children” and that, “removing the Jews from the land they occupied in 1948 is an immutable principle because it appears in the Book of Allah”, visited UNRWA’s Hamas members engaged in what they described as a “peaceful and safe sit-in”.

“I am the captain of the ship which has 13,000 sailors on it and they have basically thrown me off the bridge and consigned me to my captain’s quarters,” Matthias Schmale, UNRWA’s director of field operations in Gaza, whined.

Schmale had never actually been the captain. Zahar and other Hamas leaders had been running things.

The UNRWA was forced to evacuate most of its 19 international staffers from Gaza, including its ten senior leaders, leaving behind only 6 international staffers. This made no practical difference as the UNRWA operation on the ground was actually being run by the 13,000 Hamas UN employees.

But the UN isn’t moved by protests or violence. It runs on reports. And soon a report arrived.

Al Jazeera debuted an internal UN report alleging corruption and misconduct by UNRWA leaders. Al Jazeera is an arm of Qatar. The Islamic terror state is currently the biggest backer of the Muslim Brotherhood, supports Hamas, and is extensively involved in Gaza. Al Jazeera’s barrage of stories on the UNRWA report was a clear signal that Qatar was targeting the UN agency on behalf of Hamas.

Al Jazeera claimed that it had obtained a copy of the report from agency employees “concerned” that action wasn’t being taken against an “inner circle” running UNRWA. The inner circle consists of the international leadership that Hamas is angry at for trying to fire hundreds of its people.

The report, aired by Al Jazeera, claimed that UNRWA boss Pierre Krahenbuhl had carried on an affair with his senior adviser, Maria Mohammedi, which “embarrassed” their colleagues and donors.

Krahenbuhl, a Swiss NGO vet, is officially married to Taiba Rahim, the head of an Afghan non-profit, and Maria Mohammedi, is an Algerian who was, at least in the past, married to Rashid Abdelhamid, a “Palestinian filmmaker”, who is really an Algerian educated in France, and living in Gaza, and while this is all very multinational, it’s also the sort of “international diplomacy” that the UN frowns upon.

But if the allegations are true, the Swiss humanitarian had just gone native by adopting polygamy.

The report is filled with allegations of bullying, nepotism, abusing travel vouchers, and, the worst possible sin in a bureaucracy, bypassing official channels. And it might be more serious if the behavior being described weren’t slightly eclipsed by the fact that the rest of the UNRWA, which likely includes the employees behind the report, is an Islamic terror group dedicated to murdering children.

But in the UN, using schools as munition dumps isn’t a serious issue, going outside official channels is.

UNRWA Chief of Staff Hakam Shahwan stepped down over some unstated allegations. Deputy Head of Human Resources Nadine Khaddoura, accused of colluding in nepotism, “had to be escorted from her office under vociferous protest”, according to a report in the Washington Report on Middle East Affairs, an anti-Israel, pro-terror outlet, founded by the former US Ambassador to Qatar.

The Swiss and the Dutch have announced that they’re cutting off funds to UNRWA until it’s determined just who had an affair with whom, and who got whose husband a top job at a UN human rights agency used as a pass-through to an Islamic terrorist group dedicated to killing Jews.

This will mean even less money going to UNRWA and fewer Hamas employees in Gaza.

But Hamas has deep-pocketed backers in Qatar. The power struggle is about establishing once and for all that the Muslim Brotherhood terror group is the dog and the 17 international staffers are the tail.

Suicide bombing a bunch of European and North African lefties who got into this to eat at 5-star restaurants would be counterproductive. Taking away their jobs with a smear campaign is far more effective. And that’s what Qatar and the Brotherhood, which excel at influence operations, are doing.

The power struggle will likely end with Hamas fully in charge of UNRWA while its international staff will learn to run all their decisions past the Hamas employees who are actually running the agency.

When I wrote, “Defund the UNRWA” in 2014, it was attacked as counterproductive by establishment figures. I was urged to withdraw it and stop proposing unrealistic and destructive policies. Then, four years later, President Trump went ahead and cut payments to UNRWA from $360 million to nothing.

The cuts have revealed what we knew all along, that UNRWA is really a Hamas front.

Hamas responded to the cutoff in US aid by trying to cannibalize the UN agency. As the money gets tighter, the Islamic terror group wants to make sure that more of it goes to it, and not to the Europeans who pretend to run UNRWA while discussing the evils of Israel over expensed lunches at steakhouses.

As the wall of separation between UNRWA and Hamas comes down, international donors will have to face the fact that they’re not funding a “modern, secular” humanitarian agency, as one laughable report by the Brookings Institute, a Democrat think-tank dominated by Qatar, claimed, but Hamas.

By cutting off UNRWA, Trump set off a clash between Hamas and the UN that is revealing the truth.

CAIR Forces US Army War College Onto Its Knees