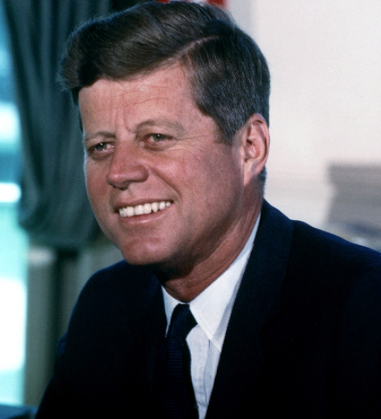 I was around in 1960 when John F. Kennedy was elected our 35th President.

At least through the 60’s and ’70s, JFK may have been our most popular president.  He was certainly one of our most visionary with programs like manned space flight, making America first to the moon, and reducing taxes; and promoting values like love of country, mutual respect, and individual dignity.

For the most part, Democrats and Republicans alike worked with Kennedy, and with one another, largely because of Kennedy’s quality of leadership.

Almost anyone alive on the day he was shot, can tell you where they were when they first heard the awful news.  I was at the soda shop with some buddies from my school in Connecticut.

Many historians believe the death of JFK was the beginning of the end for the Democrat Party.  From the moment Lyndon Johnson moved into the Oval Office, the tone and tenor of Democrat policies and rhetoric started changing.

Among Democrats, love of country began to erode. Democrat civility in public life paled, and seems recently to have disappeared. Democrat sentiments toward free markets and capitalism not only faded, it turned outright antagonistic – nearly 60% of Democrats now embrace socialism as a better economic system than capitalism.

There is still a small group of Kennedy Democrats – and even a tiny fraction of Democrats who still remember Ronald Reagan fondly –  but they’re mostly old and dying off.

And the Democrats coming behind them have been thoroughly indoctrinated by an education system that doesn’t educate.  Most young people today learn that America’s institutions, culture, and history were conceived in, and are perpetuated by, a racist white supremacy ideology; that capitalism causes social injustice and economic inequality; and that only government can be trusted to solve the social, economic, and even spiritual problems that plague people.

The media makes it worse by reinforcing all these crazy notions.

No wonder the overwhelming number of Democrats under 40 think socialism is superior to capitalism.

The vast majority don’t know Kennedy’s famous quote, “Ask not what your country can do for you, but rather what you can do for your country.” And even if they’d heard these words, it’s unclear how they’d square them with Democrat proposals that require the country to pay off their student loans, fund their health care, provide a guaranteed annual income, and guarantee free college.

The leaders of the Democrat Party today, and those coming up, are about as far left as you can go without falling off a cliff. With their advocacy of dismantling our military, they make Obama look like a war monger.  With open borders, they’ve made clear the safety of our neighborhoods isn’t even an after thought; in fact it gets no thought at all.  And rule of law?  They promote law breaking with their sanctuary cities and incendiary anti-law enforcement rhetoric.

How far have they gone? One co-chair of the Democrat National Committee prophesied that AOC represented the future of their party. This is a congresswoman who claims American border agents are Nazis, who wants to throw open our borders, who supports a $30 trillion Green New Deal that would require every person in America to pay in federal taxes every penny they make over $30,000 – and that’s before state and local taxes. Ocasio-Cortez won her seat with barely 17,000 votes yet believes she should dictate America’s future.

Today’s Democrat Party embraces the likes of Ilan Omar, a Muslim from Somalia who regularly blasts America and accuses her neighbors of near constant hate and racism.  In fact, nearly every comment she makes attacks the country that made a safe, secure, and prosperous home for her.  Meanwhile, the country of her origin was ravaged by war, hatred, and sectarianism.

And Democrats idolize her despite the fact she’s harshly anti-semitic, she’s being investigated for election fraud, and she’s rumored to have violated immigration rules by marrying her brother so he could sidestep U.S. laws.  And because she won one election in a safe Democrat district, she believes she possesses a popular mandate to replace our constitutional rights with her own socialist manifesto.

These aren’t Democrat outliers.  The Democrats running for president are mostly a gaggle of socialists.  They want to end capitalism as we know it, open our borders to whoever wants in, take guns from the law abiding making us virtually defenseless, allow non-citizens to vote, eliminate the Electoral College, and pack the Supreme Court with progressives.

John F. Kennedy wouldn’t recognize the Democrat Party he cherished and worked so hard to build.

Daniel Greenfield: The Hijabs of Our Banana Republic

It’s Not Just Gun Rights That Are at Risk!