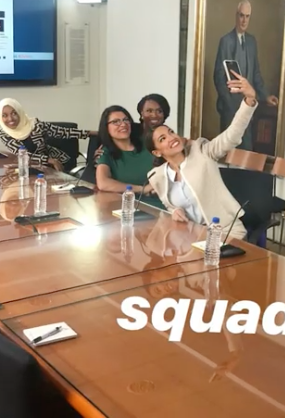 Over the weekend, Congressman Cummings, Chairman of the House Oversight Committee, decided to weigh in on the recent Twitter fight between President Trump and the four women in Alexandria Ocasio-Cortez’s self-named “Squad” of first term, far-left Members of Congress.

You may remember Congressman Elijah Cummings as the member of Congress who claimed he was spit on when he walked through a peaceful gathering of Tea Party members a few years ago.  Videos of the event showed no such thing.  The Congressman could produce no evidence.

Cummings called the four women of the Squad “young ladies” who are “some of the most brilliant young people that I have met.”

Maybe Cummings needs to get out more. He apparently thinks a woman who calls the President a Mother-F*cker as Squad member Rashaida Tlaib did qualifies as a “lady.”

But Cummings isn’t alone. Even Joe Biden recently claimed great respect for AOC and her crew. And in a vote by the House last week, Democrats voted unanimously to condemn at least one of President Trump’s tweets as racist. Ironic given that Democrats couldn’t agree on a simple resolution condemning one of the Squad’s blatantly anti-Semitic remarks just a few weeks ago.

It used to be racism was easy to spot. It was an ugly act, thought, or attitude.  It depended on believing and behaving as though your group was better than another because of ethnic background or skin tone.

That’s no longer the case with Democrats. It no longer matters what you do, or even what you think. It only matters whether you agree with them. If you don’t, you’re a racist. If you can’t see it, or don’t admit it, then that’s proof enough. So much for due process or even rational thought.

Huh?  I’m not sure I really understand what in the world she’s saying.  What I am certain of though is that if you question her comments, whatever your color, you’ll be shouted down as a racist.

A few days earlier, Ocasio-Cortez claimed the U.S.’s treatment of migrants was comparable to Nazi, Germany’s treatment of Jews. Here’s what she said about immigrant detention facilities, “The United States is running concentration camps on our southern border. And that is exactly what they are.”  This despite the fact that people are free to return to their country of origin anytime they want, they’re given three meals a day, two snacks, bottled water, health care, diapers, and all the care they need.

AOC’s sentiments aren’t just harmless hyperbole.  Last weekend, an Antifa nut tried to blow up an immigration office in Washington State.  In his manifesto, he parrots Ocaso-Cortez’s concentration camp nonsense as justification for his action.

Where’s the outrage from Democrats over AOC’s stimulating violence? It’s nowhere.  Because Democrats have decided that anything the Squad says is permitted and any criticism is “racism.”

It’s absurd and I have to believe that Americans who know they are not racists won’t fall for it.

In fact, consider for a moment some of the policy positions Democrat leaders insist you believe.  If you don’t, they’re evidence you’re a secret racist.

This is not the agenda of those committed to freedom and liberty.  What’s more, they are policies absolutely contrary to any sense of economic justice, greater prosperity, or more opportunity.  They won’t raise the poor up, but they will certainly work to tear everyone down. From that perspective, they’re clearly anti-American in their denial of traditional American values – freedom, rule of law, personal property, due process, free markets, economic justice, equality of opportunity.

And yet, Democrat leaders have almost unanimously ruled that to criticize these policies is tantamount to racism.  They actively defend the Squad, their wacky ideas, and their troops of zealots.

It’s madness.  Most Americans will be repelled.  They should be.

Mueller Testimony Crashes with a Thud