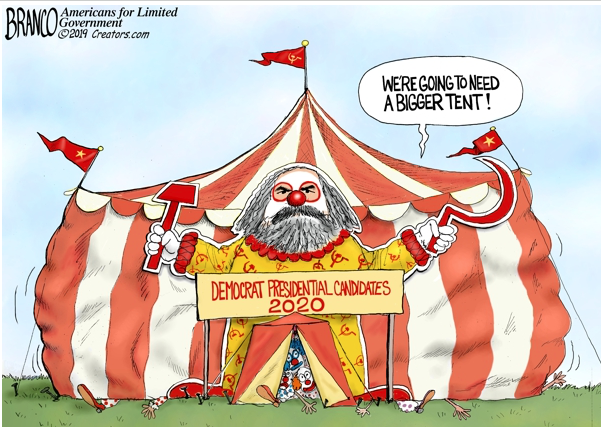 We are witnessing the Rebranding of America, into what Actor Robert Davi so aptly calls a  “Clown World.”

Clown World,  where the common core dumbing down of society has successfully rebranded communism as climate change.

Clown World, where ignorance is embraced and everyone is considered a genius.

Clown World, where the new green-with-envy utopia controls all the earth’s natural resources and everything humans are allowed to do.

Clown World, where cow farts pose an imminent danger to the planet.

Clown World, where radical jihadists are elected to serve in Congress and write laws that silence the truth.

Clown World, where even the insipidly stupid can be elected to Congress.

Clown World, where people invading America are put on pedestals and entitled to everything free.

Clown World, where a monumental meeting at the DMZ in North Korea to broker peace is scoffed at and ridiculed by Democrat clowns and their lap dog fake news media.  A media that is also full of clowns.

Clown World, where the Nobel Peace prize is given to a war monger and a broker of peace is ignored and called a bullying clown.

Clown World, where rich politicians vote themselves pay raises for doing nothing.

Clown World, where anger laden young clown fascists beat journalists in the streets and the police do nothing.

Clown World, where the Clown Justice Department is co-opted by a political agenda and the Fourth Amendment is an arcane memory.

Clown World, where a Justice Department clown lawyer is called to testify before a Congress of Clowns.

Clown World, where millions of dollars are spent cleaning up human waste and used hypodermic needles.

Clown World, where Congressional leadership pursue the smell of the greasepaint, the roar of the crowd and not much else.

Clown World, where the mediocre is actively embraced at every turn and truly noble and talented citizens are treated as clowns.

Clown World, where Democrat Presidential candidates actively demonstrate how truly clownish they can be.

Clown World,  where innocent babies are killed in an arbitrary manner by cruel clowns.

Clown World, where there are no distinctions between men and women.

Clown World, where the truth is treated as a virus.

Clown World, where there is a war for the control of our minds by clowns.

(My wife contributed a great deal to this article and, like me, she hates clowns…)

Daniel Greenfield: A Nation of Free Things or Free Men

Kaepernick: THIS Is Why Americans Celebrated Independence Day Without You