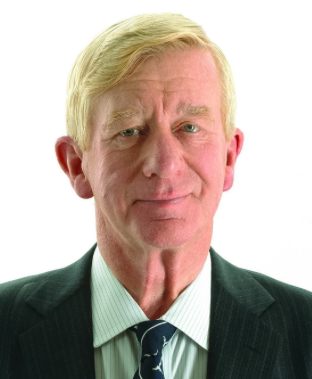 The Weld 2020 campaign site features an old photo and raw video of his campaign announcement. It’s early July and the latest update on the site is from the beginning of May. That’s incompetence as usual in the hopeless campaign by the former Massachusetts governor which is being run by his stepson.

The Never Trumper competing against President Trump for the 2020 GOP nomination claimed back in March that he could “start Monday in the Oval Office.” Three months later, he barely has a website.

Back then, Weld dismissed talk of Trump’s popularity by saying that, “six months is forever in national politics”. That’s true. But no amount of forevers would allow the former Libertarian VP to beat Trump. An Emerson poll in February, before the beginning of his campaign, showed Weld polling at 15% against Trump. After a month of campaigning, the USA Today poll in June dropped Weld down to 5%.

William Floyd Weld seems to have taken the message of the polls to heart by campaigning as little as possible. The fewer Never Trumper Republicans actually encounter him, the more likely they might be to vote for him. When asked why he was running against Trump, Weld ranted about the Mueller report, and concluded with, “I would have pursued an indictment of the President of the United States for obstruction of Justice.” Indeed, he seems to have spent as much running against Mueller, as Trump.

“Among the really dug-in Republicans, he’s got a 98% rating,” he rambled on CNN. “There are 20 states where independents are permitted to vote in the Republican primary. I’m going to be concentrating on those states.”

Trying to win the Republican nomination by concentrating on independents in 20 states is a unique strategy. Almost as unique as having your stepson run your campaign and not updating your website.

Republican, or ex-Republican Trump challengers, tend not to win votes, but at least they have money. Weld doesn’t have either one. In June, he filled for an extension on his financial disclosures which absolutely no one was waiting around to study.

Back in March, Weld was claiming that billionaires would back his campaign. They don’t seem to have shown up. He has currently raised $688,000 and loaned his campaign another $181,000.

It’s a sad comedown for a man who once boasted, “The Welds don’t make money; they have money.”

But incompetent campaigns are Weld’s specialty. His primary pitch is big on stories of successful election campaigns for Massachusetts governor. He neglects to mention that when Bill Clinton nominated him as ambassador to Mexico, over the protests of Republicans, he resigned his job so he could go to D.C. and campaign for what, to most politicians, is a sinecure for connected donors. And he failed at that.

Over two decades before this current run, Weld declared that his campaign to be an ambassador to Mexico was a fight for the heart and soul of the GOP between moderates and extremists.

”I wanted to send a message that I wanted to be captain of my ship even if it’s going to bottom,” he declared.

And the bottom is exactly where the S.S. Combover ended up.

The Republican governor of Massachusetts threw away his political career in a failed bid to become an ambassador to Mexico before many of the millennial voters whom he hopes to court were even born.

And so, he turned to writing bad novels like, Mackerel by Moonlight. “I am underclass Irish,” Weld wrote, unconvincingly, in Mackerel. “Wrong side of the tracks.” In reality, Weld was a blue-blooded descendant of bankers who lived in mansions with more rooms than some hotels. Even his novels reeked of unearned privilege with blurbs from Doris Kearns Goodwin and Mary McGrory.

The Mexico job offer came after Weld had lost to John Kerry in a Senate election leaving him in tears After washing out in Massachusetts, Weld tried for governor in New York. This was another bad idea in a series of them. Republicans weren’t eager to have Weld show up and he was being followed around by the scandal that ensued when a college that he had been running had seen its accreditation pulled.

The payroll supervisor accused him of taking a $750,000 salary. The admissions director claimed that, “millions of dollars that were literally stolen out of taxpayer’s mouths” went into his pocket.

Weld pulled out of the New York campaign.

By then, Weld had become the relic of the days when the GOP had briefly been a party of likeminded blue-blooded northeastern liberals. Only his friendship with Mitt Romney tethered him in any way to the GOP. Romney picked Weld as the co-chair of his doomed campaign against McCain. And Weld repaid the GOP by endorsing Obama. That was it for Weld as far as most Republicans were concerned.

Weld still retained Eastern Establishment friends, most notably Romney, but no Republican would vote for him. So, he dived into the 2016 election as the Libertarian VP. (Romney suggested that the Libs would have his vote if only Weld were at the top of the ticket.) Weld, an inept and uninteresting politician from yesteryear, had been brought on in the expectation that he could bring the money.

Just as in his 2020 campaign, the money never appeared. And Weld seemed much more enthused about Hillary’s candidacy than his own. On MSNBC, Weld had opined that he’s “not sure anybody is more qualified than Hillary Clinton to be president of the United States.” The ex-Republican politico had always carried a torch for Hillary, at one point, praising her, “rock-like integrity.”

In the 2016 campaign, Weld had said, “I hope Gary Johnson and Bill Weld win the presidential election, but if we don’t I hope Hillary Clinton does.” His 2020 entry is not so much about Weld winning as Trump losing. “My favorite stat on this score is the last nine times a first-term President has sought reelection, the four who had a primary challenge lost while the five who didn’t have a primary fight won another four-year term,” he recently told a reporter.

But calling it a primary fight is a shameless exaggeration.

Back in the 2016 race, Weld had been a declared “Libertarian for life”. Now he’s trying and failing to play spoiler. After failing at actual elections, he can’t even manage to put together spoiler candidacies.

“I’m not scared of anybody. I don’t care what anybody thinks about me,” Weld once protested.

That’s part of the problem.

Weld has never really cared about politics. He’s a dilletante who got into it originally because, “It seemed like great fun.” His shtick, that of the lazy, careless and harmless blue blood, won over voters in his younger days in Massachusetts. But the act, along with Weld’s blonde hair, wore thin decades ago.

What was once funny is now just sad.

Beneath the carelessness is contempt. “Almost everyone, including Republicans, agree with me in private,” Weld arrogantly insists. It’s the refrain of a man from another political era who believes that his narrow elitist circle represent the GOP and America. And generations later, he still doesn’t get it.

Trump’s victory was the ultimate rebuke to the establishment that Weld had emerged from.

Both Trump and Weld are the same age. Weld is actually younger than Trump by a month and a week. But where his opponent, who doesn’t even know he exists, seems strong and vital, Weld feels old.

William Floyd Weld is not a candidate. He’s a relic who has outlived his time and his world.