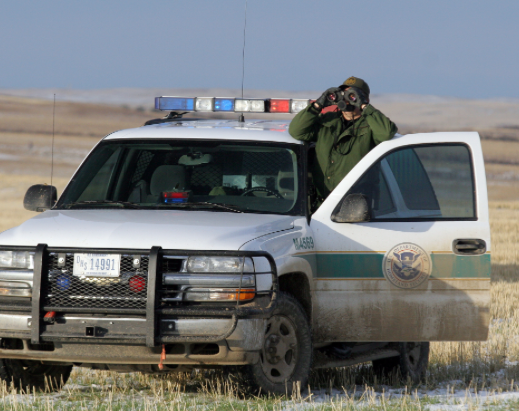 At night, while we are tucked in our bed behind our locked doors, Immigration and Border Patrol agents are taking shift rotations. Their duties include standing on the front line against people who will do anything to get through, including killing them.

These officers also prevent criminal activity such as drug trafficking, sex trafficking, and gangs from entering our country by illegal means. They work to preserve the laws set by the nation to keep our country sovereign and safe.

To me, these men and women are friends, co workers, and barriers to the bad things that can and want to enter America.

What the world has forgotten (or maybe chosen to ignore) is the children that are brought over by smugglers in an attempt to sell them to pedophiles, or they are used to get priority over processing. Then the children are abandoned, used in sexually deviant crimes, or they are killed.

Protecting Children and Innocents from Harm at the Border

Our Border patrol and immigration officers are the last line of defense to make sure these kids are not pushed through the country and put in a position they have little hope of getting out of. Without the presence of our Immigration and border officers, trafficking numbers would increase, rapes and other dangers to women crossing would increase, and murder rates would go up. Not just among themselves but also among any American who gets in their way. Not only the risk for bringing illegal children into our country, without our officers they will have open access to take American children out of the country.

We can’t do enough to shine light on the importance of the role these officers play in stopping what has become a world problem. Child smuggling and sex trafficking are highly ignored not only by political figures but also by the general public. An open border is a gateway for many abuses and crimes but an open border also gives endangered children no chance of survival.

To those who have children, would you want someone to not only kidnap your child but also take him or her to another country? With open borders that is what you are asking for. Why would you ask for that last line of defense to be taken away?

Now imagine that person who had taken your child plans to sell him or her as soon as he makes it safely across the border with nobody to stop them. If this were something you would not wish for your own child why would you ask for it to happen to another parent’s child?

Alexandra Osario Cortez is HURTING more than HELPING the situation

Alexandra Oscario Cortez (aka AOC) has worked to create hysteria with her outright lies on our officers who she herself treated in a way she claims illegal migrants are being treated. She has pushed to the general public everything but the truth.

If AOC had the best interest of the illegal migrants, she would understand that the facilities we have were never meant to sustain such massive amounts of people.

USA Today reported that Border Patrol apprehended a record total of 84,542 illegals in May, surpassing the amount in April of 58,724 family units. To put it in perspective, the month of May consisted of more people than filled a stadium fit for the 75,000 people at the recent Florida Trump campaign rally.

To publicity-seeking AOC: Separating children from adults in this type of situation is not a punishment. It is a way to make sure the child is with a biological parent and not someone who has evil intentions.

If AOC thought about it she would realize the men and women serving on our border are literally human barricades. Part of their job is to to stop potential smugglers from taking children into worse fates. Without their services we are not only suspect to potential crimes and gang members but also our most vulnerable are put at risk for never being found or recovered.

Many of the illegals AOC was crying over at the border are potentially part of these statistics. Too many don’t have any good will in mind for the children they purchase to cross over with. The statistics above also cover how big a role our officers play in fighting these crimes. But please bear in mind that these are only the crimes that have been stopped.

These statistics do not include the thousands of children who are still missing.

Too many are not accounted for due to smugglers evading officers or slipping through loopholes created by political correctness. They have possibly fallen into the hands of the sex trade, pedophiles, and worse.

In her article, Separation of Children At the Border, Colleen Lyman Peterson brings a valid concern to light in the public’s desire to change the action of separating families in an attempt to be able to know who is a predator and who is a genuine asylum seeker.

“I am grateful that we are talking about this important issue of families being separated. But I am also concerned that because of our outrage and our desire for swift change, that if we are not careful, we will make it easier for the sex traffickers to carry out this heinous crime against children. And I think that that is the last thing any of us want.”

A report by CNN shows trafficking is at its highest and admits that smugglers play a huge role in numbers of children found at the borders.

“And smuggled children are certainly at risk for human trafficking,” the United Nation children agency UNICEF and World Without Exploitation said in a joint statement. “Smugglers also take advantage of children with threats and fake promises,” they said.

The Seattle Times reported that Mexican officials are saying migrant mothers are being offered money either for their children or to cross the border as a family unit.

What do they do with the children they purchase if they do manage to get away without being apprehended or screened? One example happened last August in Tucson, Arizona when border patrol officers found a 6-year old young boy who had been abandoned by smugglers. He was sitting in temperatures of over 100 degrees the desert…

This is yet another important reason to temporarily separating families to ensure that the children are with biological parents. It further brings importance as to why our officers are needed to address this very issue.

If we did not have border patrol on watch over 16,000 sexual predators would be living among Americans today. This is the world Progressives such as Alexandra Oscario Cortez are asking us to live in. She and others are doing this by creating hysteria in the media an attempt to disparage and destroy the image of the Immigration and Border Patrol agents–the very men and women who are risking their lives to help protect us and our country.

Our immigration officers and the men who stand at the border are being attacked by the Progressive Left because they are obstacles to their utopia of open borders. If the detention centers were five star hotels you would not see them singing a different tune, they would simply change the chorus line.

Nicola Vandiver resides in South Florida where she works for an airline full time, travels, and practices photography.