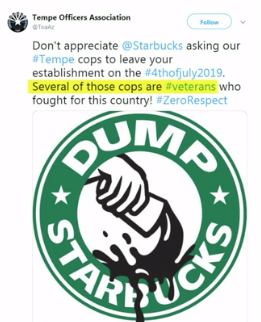 After the events of the 4th of July, you will never see me in a Starbucks again. It was there that a barista at Tempe, Arizona Starbucks asked six police officers to leave because they made a customer feel uncomfortable. Since then, corporate executives from Starbucks have met with the police in Tempe to apologize in person. That’s all well and good, but the damage has been done. The barista was undoubtedly acting in a manner consistent with the non-stop anti-police sentiment expressed by the liberal mainstream media. I think new laws need to be passed…practical laws.

If you don’t want the police hanging around your business, fine. I have an idea on how we can solve this problem.

As a law-abiding citizen I have a great deal of respect for law enforcement. Though ‘to protect and to serve’ is the motto of the Los Angeles Police Department, I’d like to think that every police department across the United States shares the same sentiment. I’ve never been in law enforcement nor had a close relative serve in that capacity, but I think any reasonably informed person should be able to understand the risks that come with wearing a badge.

According to the FBI, 106 officers lost their lives in the line of duty in 2018.  I think it’s reasonable to assume every time an officer pulls over a car or responds to a call from dispatch there is a reasonable possibility that officer could be walking into a potentially deadly situation. The fact is that the uniform evokes emotions in people and police deal with a wide variety of individuals each and every day. From the mentally insane to the criminally insane and everything in between police officers never know what they might face on any given day.

Do police officers make mistakes? Of course. They are only human. Also, like any profession in existence, it’s inevitable that individuals unworthy of the honor will find themselves wearing the badge. In a worse case scenario, it is entirely possible that someone with ulterior motives will graduate from the police academy. Police officers do wield a lot of power and in the hands of the wrong person, the results can be disastrous. There have been cases of corrupt police officers doing terrible things up to and including murder.

There is also the issue of racial profiling. Assume you have two 18-year old males. One is white and the other is black. If everything about these two young men (other than skin color) is identical, is it more likely that the black teenager will be pulled over by the police at some point than than the white teenager? I’d say the answer would likely be yes. Of course, I’m not a criminologist and I don’t know why a police officer might pull a car over in a situation where the driver is obeying the traffic laws and there is no issue with the car itself (such as a bad brake light).

I’d be remiss if I didn’t acknowledge the issue of racial profiling, but neither is Starbucks. In fact I’d say they are guilty of reverse police profiling.

The end results of reverse police profiling are as follows:

It’s as though the liberal media is deliberately trying to incite a riot. If you see news outlets constantly lambasting police for unnecessary use of deadly force, paranoia does emerge. People begin to hate the very people charged with protecting them.

The reality is this: When a police officer draws his or her gun I’m sure 99% of the time they are following proper procedures and training. Every situation is different and it does involve judgment. Was the media present when the officer pulled the trigger? Did they see what the officer saw? What made the media law enforcement experts?

So let me get this straight: If I’m a police officer and someone shouts a threat at me and reaches into their coat as if to pull a gun, it’s better for me to get killed rather than immediately draw my gun and risk shooting an unarmed suspect? Does this make any sense? Police are not clairvoyant. They are trained how to react when faced with a potentially deadly situation. It would be great if no one died, the loss of a human life is tragic, but it’s unreasonable to hold police to a standard that says they can’t defend themselves.

We need to change the law. Here is how the situation in Tempe should have gone down:

Barista (speaking to policemen): “We have a customer who finds your presence here unsettling. Despite there being six of you and only one of them, we value their business more. I’m going to have to ask you to leave.”

Policemen: “No problem. Police often patronize places such as your’s to intimidate the general public in order to keep them in line. We are happy to leave but you will have to fill out this form first.” (Officer hands a form to barista.)

Barista: “What does this mean? What is a ‘Waiver of Law Enforcement Jurisdiction’?”

Policemen: “It’s a new program whereby businesses such as yours can decline their right to law enforcement. Just sign it and we will have it notorized and filed with the court. We will send a plain clothes officer to post the official form on your doors and cash register. It says that you have waived your right to call the police and that Starbucks assumes any and all liability that may result from criminal activities. It shouldn’t pose any problem since your customers are more afraid of us than they are criminals. Good luck with everything.”

Of course a “Waiver of Law Enforcement Jurisdiction” is another term I made up because stupid times call for stupid measures. I have no doubt that the police in Tempe would immediately respond to any emergency at that Starbucks and not hesitate to risk their lives. That’s what public servants do.

Of course the leftists have solutions to everything…such as giving the federal government jurisdiction over local police…a concept that terrifyingly reminds me of Nazi Germany and the Gestapo. I think It’s much better to waive one’s right to law enforcement.

Would you go to a Starbucks knowing the police won’t respond to anything that goes on there? I wouldn’t…because I’m crazy that way. The last place anyone is going to rob at gunpoint is a place full of cops. What am I missing?

And for all of those who like to judge and criticize the dedicated people who service law enforcement, I have just one question: Who exactly do you plan on calling if you are about to fall victim to a crime? Private security doesn’t come cheap.

The 4 Main Reasons Nothing Gets Done In Congress