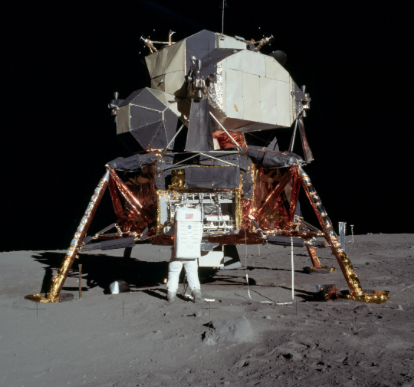 It all started with an object the size of a beach ball. It ended with the United States accomplishing the greatest technological, engineering, and aviation feat in all of human history.

As a country, the United States has always defined itself as a land of opportunity. It’s a place where anything is possible because it is the land of the free and the home of the brave. We didn’t become the most powerful and wealthy nation on Earth by accident. We got there due to the courage, determination, wisdom, and enterprising spirit of American men and women who refused to let obstacles stand in the way of their goals. That’s why great explorers such as Lewis and Clark and great frontiersmen such as Daniel Boone and Davy Crockett rose to legendary status. However, exploring the frontier isn’t an endeavor limited to the past. As we learned in the 1960’s, there will always be brave  and fearless Americans explorers willing to answer the call when a new challenge emerges.

The beach ball-sized object that gave rise to the effort which cumulated in the first manned moon landing was Sputnik, the first artificial satellite ever put into Earth orbit. By today’s standards Sputnik would hardly qualify as a technological marvel. It was only capable of sending basic data, not snapping pictures of key U.S. military installations. Nevertheless, it had a powerful impact on the American people. World War II left only two extremely powerful nations on the planet: The United States and the Soviet Union. America represented freedom, opportunity, and capitalism. The Soviets represented oppression, control, and communism. Though a full scale war never resulted, the rivalry was fierce and a bitter ideological Cold War took hold.

Americans viewed Sputnik as something far more sinister than a simplistic ball orbiting the Earth. The reality was that it represented a Soviet victory. America realized that the Soviets had superior technology and that such technology had nuclear implications. If they could put a satellite into orbit, it wasn’t a stretch to think they would soon have the ability to launch long-range nuclear weapons at us. It was both a blow to our sense of security as well as our sense of national pride. Something had to be done. We were way behind the Soviets and we had to catch up…fast. American Exceptionalism was still alive and well. We still had the attitude of ‘no one beats us…we are the best!’

So, in response to the sudden realization the U.S. was technologically behind the Soviets, President Eisenhower signed the National Aeronautics and Space Act in July of 1958. As a result, NASA was born. Soon after, in April of 1959, America’s first group of astronauts, the Mercury 7, were named: Carpenter, Cooper, Glenn, Grissom, Schirra, Shepard, and Slayton. We were still way behind the Soviets, but for the first time since America’s early frontier days, we now had a fresh group of brave pioneers…a new group of American legends. Unfortunately, before we could put them into action, the Soviets achieved another first. On April 12, 1961, the Soviets launched Vostok 1, making Yuri Gagarin the first human in space.

However, on May 5, 1961, America began the long journey towards catching up. After sitting in his Freedom 7 capsule for 4 hours as NASA handled various glitches and delays, Alan B. Shepard Jr. uttered the the now famous words: “Why don’t you fix your little problem and light this candle?” It was a display of calm and confidence that would define American astronauts. On that day Shepard became the first American in space and a large amount of American pride was restored. The beginnings of what would become a massive undertaking were beginning to take shape. All that was needed was a strong leader with a vision. We had that man in President John F. Kennedy.

Kennedy fully understood the implications of a space race. Just like any frontier, it was full of unknowns but it was also full of unlimited potential. It was not a frontier we would could cede to the Soviets. If space became their sole domain, it would mean our nation was inferior and it would give our enemy a potentially insurmountable tactical military advantage. JFK knew it would take time to surpass the Soviets but what is often lost in the discussion is the fact that Kennedy never doubted we woulddo it and had the courage to say we woulddo it. He didn’t doubt the capabilities of our Nation…he fully believed in American Exceptionalism. To him, it was all about defining a finish line…a clear objective…a specific accomplishment that would allow us to declare victory in the space race. After discussing it with his advisors the consensus was landing a man on the moon. We had no idea how to accomplish it, but neither did the Soviets. Short-term we would continue to lag behind, but long-term? Kennedy made it a marathon, not a sprint. He knew we could win the marathon.

So, only a few weeks after Shepard’s flight, Kennedy put it all on the line, telling Congress that the U.S. “should commit itself to achieving the goal, before this decade is out, of landing a man on the Moon and returning him safely to the Earth.” It wasn’t an easy sell to the American people, but in February of 1962, aboard Friendship 7, John Glenn became the first American to orbit the Earth…joining Shepard as a national hero. It also further emboldened JFK, who in a September 1962 speech at Rice Stadium proclaimed: “We choose to go to the Moon! We choose to go to the Moon…We choose to go to the Moon in this decade and do the other things, not because they are easy, but because they are hard; because that goal will serve to organize and measure the best of our energies and skills, because that challenge is one that we are willing to accept, one we are unwilling to postpone, and one we intend to win, and the others, too.” If there is one thing this country needs today, it’s a common goal. A common goal that has nothing to do with politics. A common goal that presents significant challenges yet offers tremendous rewards. A goal that will unite Americans and allow us to share a common sense of pride.

Kennedy acknowledged the scientific knowledge to be gained from space and defined it as a place where war did not currently exist. In fact he even saw space exploration as a way to encourage international cooperation. Nevertheless, space exploration had to be on our own terms: “…only if the United States occupies a position of pre-eminence can we help decide whether this new ocean will be a sea of peace or a new terrifying theater of war.” If only contemporary Democrats could think like Kennedy: It’s ok to be patriotic and it’s ok for us to do whatever we have to do to control our own destiny. America is driven by a competitive spirit and great challenges are what brings the best out in us.

As those associated with NASA of the 1960’s will tell you: It’s all about figuring how to do the seemingly impossible on a daily basis. The idea is focusing on what can be done and pushing the limits. It’s about defining ourselves by what we can do instead of what we can’t. We had to figure out many things along the way to the moon such as learning to work in space suits, making complex rendezvous calculations, designing a rocket capable of sending a capsule beyond earth orbit, and how to overcome grief and loss. For a long time the Soviets remained ahead, but we never lost the faith. We never gave up. Kennedy had defined the challenge and his untimely and tragic death only hardened our determination. Then we lost 3 additional heroes on February 27, 1967 in the Apollo 1 fire: Gus Grissom (2ndAmerican in space), Ed White (1stAmerican to walk in space), and Roger Chaffee (flew many high risk photographic reconnaissance missions).

The men and women of Projects Mercury, Gemini, and Apollo were all very dedicated and many were willing to sacrifice their personal lives to achieve a national objective. We finally pulled ahead of the Societs in December of 1968 when Frank Borman, Jim Lovell, and Bill Anders became the first humans to orbit the Moon, leading Time magazine to name them ‘Men of the Year.’ Their successful mission also provided a source of comfort in a year that saw the assassinations of both Sen. Robert F. Kennedy and Dr. Martin Luther King Jr. 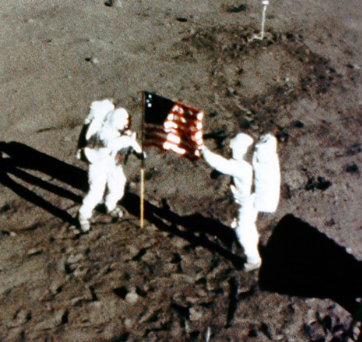 A large part of JFK’s challenge was realized on July 20, 1969 when Apollo 11 commander Neil Armstrong and lunar module pilot Buzz Aldrin landed on the Moon. A few hours later Armstrong became the first human to set foot on another world. Soon after that the first moonwalkers planted an American flag on lunar soil. It was a true national victory. We had officially beaten the Soviets. On July 26, the astronauts of Apollo 11 returned safely to Earth, completing the goal that Kennedy had defined a mere 8 years earlier. In total, 12 Americans would walk on the Moon before Apollo was cancelled due to a lack of funding. Today, only 4 of those men are still alive.

Apollo proved that with the proper resources, leadership, and focus, the United States can accomplish virtually any objective it undertakes. If only we could find a way to channel that focus once again. This country is not going to solve all of its problems let alone all the world’s problems. Instead of painting every national topic as hopelessly controversial, wouldn’t we be better suited to find a specific challenge that brings out the best of us?

Traveling? Here Are 5 Things YOU NEED!