To paraphrase this song lyric, Congress is a stranger in the majority of our homes these days.  Incomprehensible, I do not recognize the America that I have known and loved.

Congress is currently so deadlocked, the American people should declare a mistrial and start again with new faces. Inept and inactive, insane and reactive, with an emphasis on Constitutional malpractice, that is our current United States Congress. They are not doing their job in any cohesive or constructive manner.

In fact, the Democrats of the United States Congress are in the midst of an active Civil War within their own ranks. It grows more pathetically false and ugly by the hour. The Democrats have become a cheap and cheating prize fight with no knockouts, but lots of between round announcements.

The latest Democrat title bout is on the subject of racism. Racism and prejudice are subjects the Democrat party knows about far too well. In a short historical analysis, the founder of the Democrat Party was Andrew Jackson, an avowed advocate of slavery and owner of slaves.

On May 28, 1830, President Jackson signed the Indian Removal Act into law. This law moved the indigenous people of America into land, West of the Mississippi River, so that white settlers could settle into their ancestral lands.  The Cherokee people fought against this act and were unsuccessful. This systemic genocide of the first real people of  “color” in America was called the “Trail of Tears.” My Father’s ancestors walked that trail and that path was blazed by the Democrat Party. 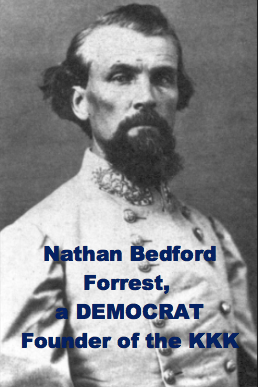 The Democrat Party is the founder of a terrorist group known as the Ku Klux Klan. Nathan Bedford Forrest, a Delegate to the Democrat Party and former Confederate General, was the first Grand Wizard of the Klan.

(Side note: Tennessee recently celebrated their annual Nathan Bedford Forrest Day. Republican Governor Bill Lee said he was bound by law to sign the proclamation for this day but wants to “start a conversation” to end a day celebrating the Democrat Confederate who helped create the KKK…)

The Democrat Party are historically the creators of the Jim Crow laws that crippled the personal progress of people of color and indigenous people.  They are the Party that fought against women’s rights and the Suffrage movement of American Women, a movement that was met with violence.  Violence that was supported by the Democrat Party. Democrats fought against any meaningful civil rights legislation for decades.

The Politics of Race in America was supported by the plantation paternalism of the Democrat Party. When Democrat President Lyndon Johnson signed the Civil Rights Act of 1964 into law, he said to supporters “I’ll have those n*****s voting Democratic for 200 years.”  Johnson created the concept of the “Great Society” which furthered the Democrat plantation paternalism and dependence on government by African-Americans and people of color.

Now in 2019, racism is a buzz word that is used in the place of a substantive argument over the real issues at hand.

Recently, Congresswoman Ocasio-Cortez accused House Speaker Nancy Pelosi of racism. This was because Speaker Pelosi tried to put the brakes on the various abusive tweets by Ocasio-Cortez and the new radical left that has infiltrated the Democrat Party. Ocasio-Cortez responded in the following manner: “When these comments first started, I kind of thought she was keeping the progressive flank at more of an arm’s distance in order to protect the more moderate members which I understood.”

As stated to the Washington Post, Ocasio-Cortez further commented: “But the persistent singling out…it got to a point where it was just outright disrespectful…the explicit singling out of newly elected women of color.”

On a humorous side note, I think Congresswoman Alexandria Ocasio-Cortez fervently embraces the abbreviation of her name as AOC.  After all, she considers herself, in the vast knowledge obtained in her 29 years, to be a new network in the radical faction of her party.

Yet, like ABC and NBC, AOC is a weakly defined network. As Shakespeare wrote, “ It is a tale told by an idiot. Full of sound and fury, signifying nothing.”

The newly elected women of color have been labeled “The Squad.” Besides New York Congresswoman, Ocasio-Cortez, there is Ilhan Omar of Minnesota, Ayanna Pressley of Massachusetts and Rashida Tlaib of Michigan.  These women are all ethnic minorities who constitute the radical new left of the Democrat Party. They seem to be beyond any real censure by Speaker Pelosi, as she remains mostly silent.  Ilhan Omar’s hateful comments on Israel and the labeling of all Trump supporters as “racist” angers me as a  patriotic American.

It is ironic that the recent chants at the Trump rally in Greenville, N.C. “Send her back” may become a reality if the reports of Ilan committing immigration fraud are validated. Her actual citizenship and her right to hold an elected office may be in question and should be investigated.

These are hateful, spiteful women whose lack of love for our country angers me. I am not a racist and resent the implication that I am because I support President Trump. The attempts to silence anyone that does not embrace the ideology of the far left by labeling us all racist and ignorant will not succeed in silencing the truth.

The constant banter that “President Trump is racist” and is dividing our country is nothing but projection by the Democrats and their lap dog media. In truth, the only “prejudice” hard-working Trump supporters might have is against insipidly stupid, blindly hateful individuals that disrespect America and our brave warriors.

With apologies to the television program, “The Mod Squad,” these Congresswomen are more appropriately “The Mad Squad” and are the truly dangerous components of the Democrat Party’s active participation in what I previously wrote about as a “Clown World.”

“So interesting to see “Progressive” Democrat Congresswomen, who originally came from countries whose governments are a complete and total catastrophe, the worst, most corrupt and inept in the world ( if they even have a functioning government at all) now loudly and viciously telling the people of the United States, the greatest and most powerful nation on earth how our government is to be run.  Why don’t they go back and help fix the totally broken and crime infested places from which they came.”

President Trump never said go back to the countries you came from, he said “Why don’t they go back and help fix the totally broken and crime infested places from which they came.”

They were all elected to represent specific districts.  What are they doing to improve living conditions in these districts?

The only people that read this tweet and saw racism are projecting their own racist ideology. Yet, these Congressional Representatives and all their adoring fans twist this tweet into a racist statement. These are hateful individuals that head up the anarchists living in far left Clown World.  Their election demonstrates the successful common core dumbing down of America.

President Trump has successfully linked the Mad Squad as the face of the Democrat Party.  The radical leftists “Mad Squad” has done nothing but play identity politics and claim victimhood status when challenged on their Marxist green-with-envy utopia agenda. Their leftist supporters chant, “No borders, no ICE, no U.S.A. at all.”

Today, we are a more divided nation because of the fundamental transformation achieved by the previous administration.  The Obama Administration succeeded in waking up a sleeping giant. President Trump was opposed by the status quo in both political parties.

The lies and false allegations continue as the alt-right and alt-left join forces to undermine President Trump and silence his supporters. It is a shame that instead of uniting our country many politicians and their lap dog media labels anyone that has an opposing view as racist or ignorant and only want to keep us divided.

The Democrat Party is currently embroiled in a Civil War within their ranks.  It will be entertaining to see how many more “meow moments” there will be between Speaker Pelosi and the Mad Squad. Meanwhile the American people now have a clear choice between a party that worships big government and socialism and a party that worships God Almighty and free will. This is a battle for the soul of America. I fear the worst is yet to come.

Barry Shaw: Israel Is the Next Target for "The Squad" (How Rapidly America Has Fallen)