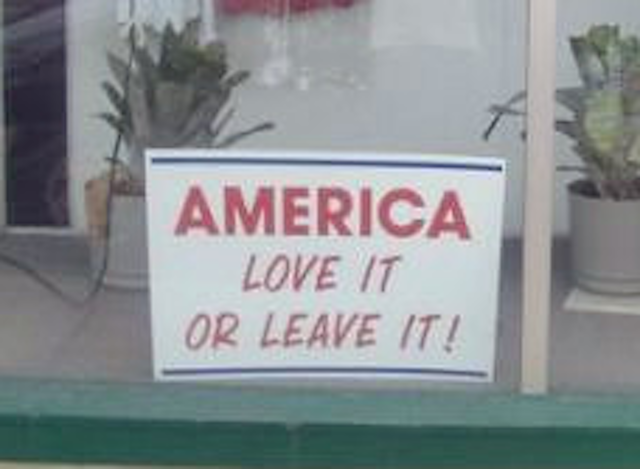 Early on the morning of July 5th my wife and I left the USA for a few days of much needed R&R on Grand Cayman Island: a British Colony.

As we left, newspapers still carried the fallout over NIKE dropping its sneaker with the 13-star Betsy Ross-era American flag — all because the 49ers quarterback-turned-social-whiner, Colin Kaepernick, complained.  Kaepernick claimed the revolutionary flag is racist. His supporters compare that flag with the Nazi swastika.

It’s disgusting and it insults the hundreds of thousands of Americans who died to end slavery, and President Lincoln who was assassinated for having led that cataclysmic event.  It’s also insulting to the millions of Americans who have worked, fought, and too often died to extend freedom around the world.

Also in the news were stories of protesters who threw burning American flags at police officers hoping to hurt them.  It too was disgusting, and it too insulted.

The big story though in most newspapers focused on the decision by Democrat Congressional leaders to launch another investigation — this time looking at how much Trump spent on the July 4th festivities in Washington DC.  Democrats in Congress continue to prove they prefer investigation, harassment, and cynicism to patriotic celebration.

Once we arrived at our hotel on Grand Cayman, the room wasn’t quite ready, so we went for a walk around the property.  Low and behold, it was on the beach of a foreign country that we saw the most wonderful sand sculpture celebrating America’s independence day. And not just any foreign country, but the very one we fought 235 years ago to win that independence!

Later that night, the island launched a grand fireworks display over the beach to show their gratitude for all America’s done during the last 200 plus years to promote freedom, peace, economic prosperity, and decency around the world.

Isn’t it odd that seemingly America’s most vociferous haters are here … in America?  Bernie, and AOC, and Corey, and Kamala, and all their friends, fans, and fellow travelers would much rather ignore the huge things America’s gotten right, and instead dwell on their piddling grudges.  Even more odd is that so many of those grudges are based on ignorance or outright deceit.  They cling to the false myths of an ideology that sacrifices truth for the attainment of power.

As one example, Kaepernick tweeted a quote from the heroic black abolitionist Frederick Douglass.  It was a quote Kaepernick had completely taken out of context. Yes, Douglas did indeed say American independence meant nothing to those abused in slavery, but Kaepernick left out all the parts where Douglass made clear the Declaration of Independence and the Constitution of the United States were a far superior model for government than any other in the history of the world if only their spirit were followed. Slavery ended 13 years later.

After that, Douglass praised the sacrifices made by so many of his fellow Americans to end slavery.  He also praised America’s commitment to free markets, its entrepreneurial ethos, and its historic exceptionalism.  Douglass later became the first black man to be nominated for president — as a Republican!  Kaepernick would do well to actually read Douglass’ speeches and writings, and not just the quotes he finds on Google.

The Congress meanwhile shows their true allegiance not just in preferring phony investigations to patriotic celebrations, but also in risking the property, health, and lives of Americans by throwing open our borders.  Open borders are the certain result of their refusal to deal with immigration reform, or give border agents adequate funds to properly handle the growing crisis on our southern border.

And while Congress’ inaction exacerbates the influx of illegal immigrants, at least two presidential candidates are taking advantage by campaigning in Mexico to be America’s next president.  What?  You heard right.   Corey Booker and Beto O‘Rourke are telling everyone in Mexico how really great they would be for our southern neighbors should they be elected president. Booker actually brought back with him at least four illegals who were seeking asylum.

If that’s not insulting enough, one Democratic congresswoman sent her taxpayer paid staff to Mexico to help migrants there break American law and enter our country illegally.  Unless I am badly mistaken, and I’m pretty sure I’m not; people in Mexico intending to enter our country illegally are not her constituents and are therefore NOT entitled to benefit from staff paid for by American taxpayers.

I sometimes wonder if the outrages committed by the left aren’t the desperate gasps of people who know they’re on their last legs.  The recent arrest of Democrat financier Jeffrey Epstein on charges of sex trafficking, and sharing the victims of sex trafficking with friends, may well implicate a number of Democrat Congress members.

Also the IG seems to be getting close to releasing a damning report about the illegal wiretapping by the Obama-Biden Administration against the Trump campaign.

New information may also be forthcoming about taxpayer funded payoffs to the sexually abused staff of Congressmen, and still more corruption charges may be on their way against the Clinton’s crooked foundation fundraising.

With all the real scandals on their own plates, Democrats may be too busy to pursue the phony charges they’re trying to cook up against Trump.

We can only hope.

Until then it would be wise to remember that America is indeed a special and wonderful place.  And while we can disagree on the issues, we would be far better off if we remembered this country is still the most enlightened, amazing, and exceptional place on earth.

If you don’t believe me, take a trip to Grand Cayman; or anywhere else for that matter.  My wife and I found that those living elsewhere know just how special and amazing America is; and how it represents a hope those people could otherwise never imagine.  We also learned that those in foreign lands are often pulling for us, even when we fail to pull for ourselves.