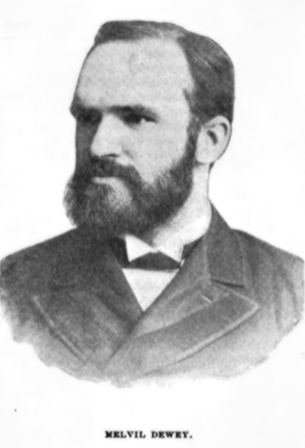 The Dewey Decimal System is the foundation of the modern library. Hundreds of thousands of libraries have laid out their collections around the work of the founder of the American Library Association.

Now Melvil Dewey has been purged by the American Library Association.

The ALA’s resolution declares that its founder “does not represent the stated fundamental values of ALA in equity, diversity, and inclusion” and thus will rename the Melvil Dewey Medal to something else.

Renaming an award, without renaming the Dewey Decimal System seems odd, but stripping Dewey’s name from a meaningless award is easy, transforming library catalogs is a lot more difficult.

Virtue signaling is easiest when it takes very little work.

The purge was inevitable. The ALA is a leftist organization and Dewey had been due for the worst kind of revival. His name had begun showing up in the posts that millennial progressives who don’t know any history write to denounce the political incorrectness of some overlooked figure from the past.

Dewey’s sins from 1906 are only new to lefty millennials with no knowledge of history beyond last week.

The denunciation of Melvil Dewey rests on two sins that were not only very well known in his own time, but had already been dealt with a century ago, his sexual harassment of female librarians, and his racism and anti-Semitism. Not only was his misconduct well known, but over a hundred years ago he was forced out of the ALA over sexual harassment and out of the New York State Library over anti-Semitism.

Why did the ALA create an award named after a man it once shunned as a creep with wandering hands?

Melvil Dewey made the American Library Association what it is and his failings and faults are writ large across the entire spectrum of liberal intellectual life. The millennial friendly hot takes on Dewey’s life reduce him to another racist, sexist white man from a bygone era. And that ignores the actual reality.

Dewey was in a position to sexually harass numerous women because he was a feminist.

As a key figure in the Men’s League for Woman Suffrage, Dewey had appeared at suffrage events and marched alongside suffragettes to call for votes for women. He got women into Columbia by hijacking a classroom, creating the first library school, the School of Library Economy at Columbia, and admitting a mostly female class to a college that did not allow women over the protests of the trustees.

That class went on to become leaders in a new field that would be dominated by women.

Along with his wife, Dewey championed birth control, votes for women, and the League of Nations. He was a progressive hero, before he was disgraced, was resurrected as a hero, before being purged again.

The intersection between male feminists and sexual predators dates back well over a century. The stories eager to lay out all the complaints of sexual harassment against Dewey for decades neglect the role his progressive social views played in his actions. Did Dewey advocate for women’s rights because it gave him more opportunities to prey on women? Or did his social views cause his abuses?

Dewey had been a member of the American Social Hygiene Association which promoted sexual education and birth control. At the Conference on Race Betterment, a eugenics group, he argued for a ban on tobacco. Margaret Sanger, who combined eugenics and birth control, listed him as an endorser.

At least one article has linked Dewey to the Oneida Community, a communal sexual cult whose founder coined the term, “free love”. An early joke about Dewey from his chums has him heading to that “Paradisi of bliss, that ‘Oneida Community’ where all men are free and equal, and all women ditto.”

Instead, Dewey turned library science into his own commune, surrounded by women he groped and harassed, even as he championed their equality and boosted their professional careers.

It’s an old story. And it created the American Library Association.

Some viewed the Lake Placid Club, which generated the accusations of anti-Semitism over its exclusion of Jews, to attempts to create another progressive utopian community, married to Dewey’s obsession with the metric system. (All the guests had to turn out the lights and go to sleep by 10 PM.)

A member’s Christian wife was banned because her “blood” was one-quarter Jewish. American anti-Semitism was social. Dewey’s racial anti-Semitism would later find its eugenic echo in Nazi Germany.

The specific ban, of which Jews ran afoul, extended also to “consumptives, or other invalids”.

Dewey was a member of the Eugenics Committee of the United States.

The Lake Placid Club had been set up for the educators and thinkers who were Melvil’s friends and allies. It was not the country club of a reactionary set, but the society of a progressive elite.

The anti-Semitism at the Lake Placid Club was not old. It was a New Anti-Semitism of the Left.

Melvil Dewey and his wife Annie were obsessed with improving the race. Jews had no place in their vision of a progressive nation run by a master race using eugenics to improve the species.

Just as Dewey’s sexual harassment stemmed from his progressive views, so did his anti-Semitism.

Those facts are absent from the stories about his name being removed from ALA award. None of them address the reality that Dewey’s lechery and bigotry defined progressivism and leftist politics today.

Dewey suffered from the typical progressive obsession with modernity and efficiency. The end result was dehumanizing and disastrous. The founding genius of the library system was almost impossible to listen to as a teacher, intolerable as a colleague and an obsessive-compulsive mess as a friend.

Melvil Dewey was an obsessive progressive. The first clue is in his first name. A fierce advocate of spelling reform, Dewey changed the spelling of his name from Melville to Melvil and from Dewey to Dui.

“Skolars agree,” he ranted in a sample of what his spelling reform would have done to the language, “that we hav the most unsyentif ik, unskolarli, illojical & wasteful spelling ani languaj ever ataind.”

Dewey’s obsession with reforming everything made him the toast of progressives. He championed transforming the language and imposing the metric system. He wanted to see everything modernized. The progressive reformer envisioned a world of rigid conformity and unstoppable change. He resolved the paradox, as all lefty reformers do, with a totalitarian answer of tyrants imposing new world orders.

And, like all radicals, he lived long enough to run afoul of the new world he had brought into being.

While the ALA can take Dewey’s name off its medal, the unified duality of his feminism and sexual harassment, his progressive values and bigotry, his obsession with the new and destruction of the old, characterize the movement that is purging him. Lefties can get rid of Dewey, but not the Dewey within.