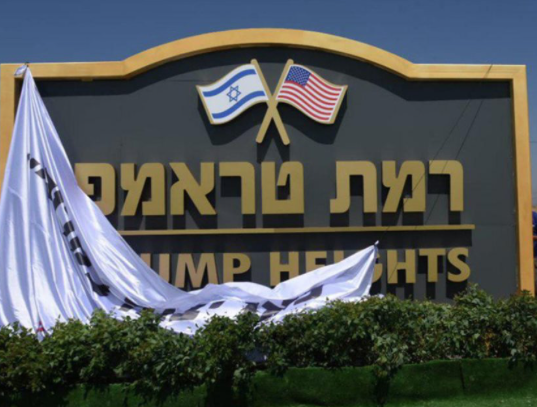 At an elevation of over 2,000 feet, the road to Ramat Trump or Trump Heights at times appears to be climbing into the sky. The Golan Heights with its scrub and brush, the vast Mediterranean vistas, nature reserves and artsy cottages, interrupted by secluded villages with more livestock than people, could easily be mistaken for some rural part of California. But occasionally there is the distant sound of artillery or the sonic booms of Israeli or Russian jets reminding everyone that this is a war zone.

On the other side of the wineries and ranches isn’t California, but a murderous struggle between Sunni and Shiite Islamic terrorists battling each other and themselves for control of Syria. Factions on the other side include Iran, Al Qaeda, ISIS and the Muslim Brotherhood. Ever since Trump won, the struggle has been dying down. ISIS has mostly been crushed. But the cows up here can’t count on the quiet.

The announcement that Israel would be naming a town after Trump, in appreciation of his recognition of the Golan Heights, was met with jeers and media cries that it would be an “illegal settlement”.

There’s plenty of history behind dismissing the notion of “illegal settlements” on land where Jews had lived for thousands of years. Ramat Trump will be under the authority of the Golan Regional Council based out of Katzrin, a Jewish village with an ancient synagogue dating back to at least the 4th century built by refugees fleeing the might of Rome, only for it and other small Jewish villages built on the Heights to encounter the Islamic invaders claiming the land not for the emperor, but for the caliph.

On the Syrian side, there are still jihadis hoping to invade and claim the land for another caliph.

The Democrats, activists and media hacks who condemned President Trump’s recognition of the Golan Heights and who denounce Ramat Trump as an “Israeli settlement” haven’t explained what they want to see done with it. Do they want to turn it over to the Sunni or Shiite jihadists? To ISIS or to Iran?

The calm waters and scattered stones, the massive clouds slowly drifting across the sky and the breeze rich with the smell of growing things, belie the many battles that have been fought here.

And may be fought yet again.

After the next Israeli election, Trump Heights will slowly come into being near the community of Kela Alon named after the oaks that thrive here and which were referenced by the prophets in biblical times. A more recent landmark is Petroleum Road, the remnants of a pipeline which once ran from Saudi Arabia to Lebanon. The pipeline and the road have long since become defunct. One day archeologists will dig them up to unearth their secrets. But for now, Petroleum Road has another secret to tell.

On Yom Kippur, the holiest day of Judaism, Syria and Egypt launched a surprise attack on the Jewish State. Some of the bloodiest battles for survival were fought here as a handful of Israelis held out against overwhelming odds.

On Petroleum Road, Lieutenant Zvika Greengold, 21, with one tank, held off an entire Syrian armored division. Greengold, who had been born in a kibbutz named after the ghetto fighters, destroyed 60 tanks in 30 hours of fighting. His tank was knocked out, his uniform caught on fire, but he never gave up.

Highway 98, off Petroleum Road, leads to the Valley of Tears. That’s the memorial for the Israeli soldiers who fought and died when 175 Israeli tanks stood against 700 Syrian tanks. Highway 98 isn’t just a road. The location was one of the objectives of the battle that left hundreds of enemy tanks in ruins.

Such lopsided battles defined the struggle for the Heights with outnumbered and overwhelmed Israeli forces building temporary walls out of enemy armor while waiting and praying for reinforcements.

The bloody lessons of those days have settled the question of the Golan Heights for virtually all Israelis.

The commanding heights that allowed Israeli forces to survive, to win battles by holding the line and preventing superior enemy forces from breaking through gaps, cannot be surrendered at any price.

You might as well have asked the 300 Spartans to surrender the Hot Gates to the Persians as to demand that the Israelis turn over the Kuneitra Gap and its lava beds to Iran’s proxies in Syria.

It’s been a long time since 1973. Old heroes have gone to their resting place. But the war waits.

Aside from the visit by Prime Minister Netanyahu and Ambassador Friedman to dedicate Ramat Trump, the area is quiet. The new community will rise out of an older community of Bruchim or Welcome. The symbolism is significant because when Bruchim village was pioneered back in the 90s, a furious Secretary of State James Baker had blasted Israel’s “provocative” actions in creating a “settlement”.

Three decades later, the few Soviet Jewish refugees who found welcome in these heights live quietly and provoke no one. Baker’s efforts at Israeli-Syrian peace talks not only failed, but were irrelevant. Syria, like much of the rest of the region, is not a country or a people, it’s a dictatorship welding together different peoples and tribes who would fight for dominance and independence any chance they get.

A deal with the Assad family is as hollow and meaningless as one signed with a drug cartel or Hamas.

President Trump’s recognition of the Golan Heights disavows the fantasy foreign policy of both Bush administrations and of the Obama administration. Trump is a realist and how better to honor him than to recognize the reality on the ground. That’s the message that dedicating Trump Heights sends.

Israelis have brought American diplomats and politicians to the Golan Heights for generations to show them how vulnerable the country is. They all nodded their heads as if they understood. But none did.

Trump Heights is named after the only man in the White House who understood how important it is.

James Baker III had represented generations of the old Republican foreign establishment. His protégé, Condoleezza Rice had carried on his work under Bush II. But Baker’s closest equivalent in the Trump era, Rex Tillerson, another oil company man, was gone and replaced by Secretary of State Mike Pompeo. Pompeo is a realist not given to fantasy diplomacy, ambitious regional solutions or wishful thinking.

The old Arabist anti-Israel alliances have fractured and some of the Sunni Muslim oil powers would rather that Israel hold the Golan Heights than that Iran add another strategic region to its empire.

Trump Heights will not be a booming hub of commerce and technology. The Golan Heights are remote and not suited for huge bustling crowds. With 110 housing units planned, Ramat Trump will probably have fewer residents than most Trump hotels. Traffic will be light. And likely limited to tourists and artists staying for a while in the nearby cottages of Matsok Orvim or the Cliff of Crows.

But the vistas and the history here are too overwhelming for big buildings and shopping malls.

The Israelis who live in Trump Heights will not be wealthy. They will have few luxuries. But they will be determined. All Israelis live in a war zone. But some do more than others. All Israelis live close to heaven. But some heights are closer than others. The unyielding patience of history has formed the rock and dust here. And some of that quiet determination has made its mark on the land and the people.

The Heights are crowded with thousands of years of history, with the sounds of falling shells and screaming men, but also with a vastness of sky and earth that open the human heart to wonder. There are strange megalithic monuments that have never been explained, unexpected springs bounding from the earth, and massive waterfalls. And in the air is that intangible taste of a timeless eternity.

Barry Shaw: Ilhan Omar, Her Husbands and Her Father