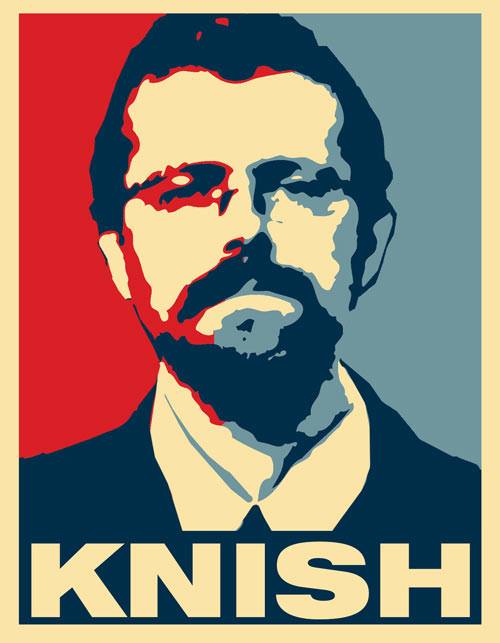 In March, DNC boss Tom Perez claimed that FOX News could not be trusted to host a “fair and neutral debate” because of the “inappropriate relationship” between President Trump and the news network.

In a FOX News interview, Perez accused it of having “put the thumb on the scale”.

And then the DNC awarded the first Democrat debate to MSNBC and NBC News.

Maddow had briefly become the public face of MSNBC, remaking it with disastrous results. In the Trump era, the formerly lightweight leftist pundit was reinvented as an obsessive conspiracy theorist. Maddow had barely paid attention to Russia before. Now, her show was built around finding a nexus between Trump and Russia while postulating that everything Trump did was done on Vladimir Putin’s orders.

On one show, she suggested that it may be that “the American presidency right now is the product of collusion between the Russian intelligence services and an American campaign.”

During the Democrat shutdown, she implied that Trump was trying to destroy the country on Putin’s orders. “If Russia did get a US president to act on their behalf against the United States. If you were Russia, what else would you want that president to do at this point?” she breathlessly fulminated. “The government is not just a vehicle that has sputtered to a halt, each passing day pours more sugar into the gas tank, making it harder and harder for this thing to ever get running again.”

This was the unhinged conspiracy theorist whom the DNC thought should be moderating a debate.

The DNC’s Perez had justified his FOX News ban based on a hit piece by Jane Mayer that appeared in the New Yorker. Mayer was a regular on MSNBC and appeared on the lefty news network to promote the very hit piece that had been cited by Perez. Mayer had also appeared on Maddow’s show even though the New York Times had banned its reporters from the conspiracy show.

Some of Mayer’s biggest hits were done in collaboration with Ronan Farrow. The best known of these was a disastrous story about a second accuser targeting Justice Kavanaugh. Mayer went on MSNBC to discuss the allegations. Farrow’s original home had been MSNBC. His failed MSNBC show had been seen as part of the failed ‘Maddowization’ of the lefty news network.

But these days there’s an MSNBCization of the DNC.

Beyond Maddow, and the DNC boss citing an attack on the journalistic standards of FOX News by one of her guests as his basis for a ban, the rise of MSDNC occasioned protests from other news channels.

CBS, CNN, ABC, FOX and even C-SPAN are protesting a sweetheart deal between MSNBC and the DNC that grants the lefty news channel exclusive live rights to the weekend party convention in South Carolina. Other news networks face an embargo on video coverage. South Carolina Dems are claiming that MSNBC will provide the 2020 candidates with more coverage, but that doesn’t hold up for C-SPAN.

C-SPAN is a non-profit that practically exists to broadcast political speeches. The Dems aren’t barring C-SPAN because they’re worried that their candidate’s speeches won’t be aired and accessible.

They’re doing it because MSNBC has become the house news network of the Democrats.

Anchoring the MSNBC coverage of the event will be Al Sharpton and Joy Reid. Both Sharpton and Reid have an ugly history of anti-Semitism and other forms of bigotry. While Tom Perez had taken shots at Sean Hannity, he’s quite comfortable with Sharpton, a bigot who had declared, “We taught philosophy and astrology and mathematics before Socrates and them Greek homos ever got around to it” and “if the Jews want to get it on, tell them to pin their yarmulkes back and come over to my house.”

That’s acceptable at the DNC. But FOX News anchors like Bret Baier and Chris Wallace aren’t.

Beyond the bigotry, Sharpton was a former presidential candidate who had his own DNC speaking slot. He’s also a Dem kingmaker with presidential candidates routinely lining up to get his endorsement. At his National Action Network Conference, he welcomed 2020 Dem contenders to make their pitch.

Dems and their MSNBC allies have attacked FOX News as “State TV” over the friendliness of some of the editorial shows and other non-anchors to President Trump. But the Democrats giving MSNBC an exclusive, while locking out C-SPAN, to broadcast a party event anchored by a party activist is State TV.

A Democrat kingmaker is anchoring coverage of a Democrat event in an exclusive deal for MSNBC.

And the collusion between MSNBC and the DNC gets even uglier.

“Yesterday, I received a call from @DafnaLinzer who serves as managing editor of NBC/MSNBC politics. Dafna’s conduct during the call was highly inappropriate and unethical. So what was the purpose of her call? She called me to bully me on behalf of the DNC,” Yashar Ali, a freelance reporter, tweeted.

Ali had picked up a scoop about the primary debate dates.

After he tried confirming the dates with the DNC, he received a call from Dafna Linzer. Linzer, the managing politics editor for MSNBC and NBC, had gotten a call from the DNC and took a “menacing tone” demanding that Ali hold the story until the DNC was ready.

“I realized that @DafnaLinzer, the head of all political coverage for NBC News and MSNBC wasn’t calling to advocate for her network, she was calling to advocate the DNC’s position. She wanted me to wait so they could call state party leaders,” Ali tweeted.

“I couldn’t believe what she was saying. Again, it was fine for me to print the story an hour later, beat her own network by three hours, she just wanted me to let the DNC inform state party leaders.”

“Why the hell did she care?” he asked.

The answer becomes much more apparent if you think of the MSNBC and DNC leadership teams as interchangeable figures with the same goals, but different functions under an umbrella organization.

MSNBC had been born out of a strange hybrid relationship between Microsoft and NBC. The failed collaboration between a lefty tech giant and a news network to create a lefty echo chamber (Slate was once another Microsoft product) was ahead of its time in an era where Facebook co-founder Chris Hughes owns the New Republic, eBay founder Pierre Omidyar funds The Intercept and The Bulwark, Salesforce’s Marc Benioff owns Time and Amazon boss Jeff Bezos owns the Washington Post.

The convergence of the Democrats and MSNBC appears to be a more logical and inevitable merger.

MSNBC had long leaned leftward. And as the Democrats have tilted sharply in the same direction, it’s becoming more difficult to figure out where the DNC ends and MSNBC begins. Some are calling this new hybrid, DNCMSNBC. Others have opted for lighter portmanteaus like DNBC and MSDNC.

But, call it what you will, State TV is here. And at the DNC, MSNBC always has an exclusive.

Qur'an Oath in America: Does It Matter?

The 4 Main Reasons Nothing Gets Done In Congress