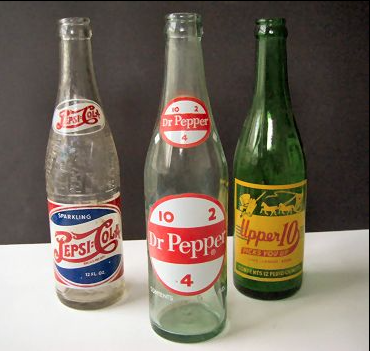 The following may get me kicked out as a PolitiDude, however with so much in the news about past indiscretions by top Democrats I feel I must be honest as a Republican and come out with the truth.

The year was 1954 and I was a freshman in a small church college in the Shenandoah Valley of Virginia. My roommate and best pal was a ministerial student. For the sake of his privacy, as he later became a successful pastor, I will not name him. Of course he cannot be excommunicated as he is Protestant and also retired.

Money can be hard to come by when in college and so we both held on campus jobs. One day my roommate and I had an inspiration. We got tired of the empty soft drink bottles we saw everywhere, including many in our room as I always pickled up a number of orange and grape drinks when home. Remember those?

Someone reminded us that you could get two cents a bottle if returned to a store so we decided to take ours plus any we found abandoned in hallways or trash bins outside our dorm. We borrowed a wagon from a kid whose parents lived on campus as they both were professors and must have had one hundred.

Now that meant only a two whole dollars, but remember this was 1954. A dollar was a lot for a kid in college. For example it would cover two movie tickets and a bite to eat afterward. So we merrily made our way to the center of town where our college was located.

As we traveled only one car passed us and the driver who we recognized waved. He ran the college snack shop. On our way back to the dorm with our small fortune in hand he passed us again and waved.

The next day the boom was lowered. My roommate and I each received a letter on college stationary signed by the college snack shop guy. It said in effect: “I believe I caught you stealing school property and making money off of it. You need to refund that money to the snack shop immediately or disciplinary action will be taken.” Scary stuff for innocent freshmen to receive. The threat of losing a future as a pastor for my roommate and as a teacher for me.

We had one defense and marched to the snack shop with it. There was no way to prove the bottles taken had been bought on campus. I was prepared to involve my parents as witnesses that many had been brought from home.

Sadly we still relinquished half the money made. Fifty cents each was better than nothing and this would not go on our records.
Now why do I admit this stain on my past after all these years? It is because I see all these high crimes and misdemeanors top Democrats have gotten away with and we are talking big stuff. Not just taking empty bottles to a store for refunds. Now if my roommate and I had done something really big and criminal and been progressive liberals, we would have high offices today. That is until the present administration takes action. Go, Mr. President, and I will gladly do the time for my own small crime.
I only ask that PolitiChicks not disown me.
Share
Facebook Twitter Pinterest Reddit Share via Email Print