California used to be the premiere location to work, live and raise a family. From the days of the gold rush to the vast influx of people looking for good paying jobs following World War 2, the state was known for its beautiful weather and unlimited possibilities. The families who relocated to the area worked hard and grew the state into a cultural and economic powerhouse. While these facts may have been true in the past, years of liberal rule have seriously degraded all the things that made California great. Recent evidence of this decay can be seen on a daily basis almost in every city in the State.

Politicians, they promise Utopia, but deliver suffering. It took about 12 years for the Democratic Party to completely destroy the state, and now we provide free healthcare to every illegal alien in the United States. The health effects of the Sanctuary cities and the homelessness epidemic in Los Angeles, Pinsky, a board certified internist, called the city government “disgustingly negligent” and said they are not addressing the issue correctly. The government believes housing is the problem but there is rampant mental illness and drug addiction among the homeless and they aren’t interested in housing.

So, the solution Kamala Harris, Gavin Newsom, and Eric Garcetti tout, “affordable housing,” it won’t have an effect on the “vast majority” of the homeless population.

The homeless crisis that has reared its ugly head in Los Angeles, Orange County and San Francisco are especially stark reminders of California’s failed governmental policies. Orange County alone has seen a 42% increase in the homeless population over the last 2 years. The statewide numbers are even more staggering; statistics released by the federal government show that as of January 2018, California had an estimated 129,972 homeless individuals on any given day and upwards of 34,000 of these people were homeless on a continuous basis. Nationwide, California holds the LEAD as the state with the largest number of homeless people and accounts for a whopping 24% of the national homeless population, way ahead of New York’s 17% share and Florida’s 5.6% share. To make matters worse things are not projected to get any better. This is in spite of the fact that hundreds of millions of dollars have been spent on various programs designed to assist the ever homeless population.

“We have complete breakdown of the basic needs of civilization in California right now. We have the three prongs of airborne diseases; tuberculosis is exploding, rodent fleas. Most of California does not have a rodent control program. Sanitation has broken down. Politicians that control most cities and the state are run by Democrats and they are pontificating that it is the housing industry that are failing to create affordable housing for these individuals. These troubled communities in California are descending into reckless, irresponsible chaos while politicians are playing the blame game.”

The government is somehow insisting that housing is the problem when in fact we have chronic mental illness, we have addiction, we have people who don’t want to leave the streets, Pinsky said. “They literally won’t take the housing if we give it to them. And that’s the population that’s vulnerable, and is going to get so ill.” It should scare us all for our children and families and their well being.

The lack of facilities and the enormous amounts of rubbish, drug paraphernalia, human excrement and filth have turned our beautiful picturesque cities here in California into areas resembling 3rd world cesspools. San Francisco used to be known for things like the 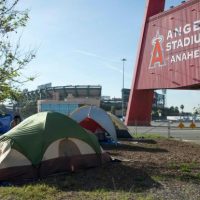 Golden Gate Bridge, and Orange County is well known for family vacations at the “Happiest Place on Earth” and large conventions. The dramatically larger prevalence of visible homelessness in the cities is widely noted by visitors as well as residents, and as of 2018, the impact to these city’s largest industry, TOURISM (a $9 billion industry), as one large doctors’ group has decided to move their annual convention elsewhere. With mountains of trash accumulating at a staggering rate, sanitation employees simply cannot keep up.  All of these factors point to a certain human health disaster. Afflictions like hepatitis, STDs and bacterial infections are becoming more common. Once rare and unknown Typhus made a dramatic appearance in Los Angeles last year. According to the California Public Health Department, the area had 167 cases of Typhus in the period that encompassed January 2018 to February 2019. This was up from only 13 cases in 2008.

The homeless crisis in California is a problem created by all levels of government. It perfectly illustrates how too much governmental regulation can have negative effects. Years of destructive policies and taxes have limited housing supply and driven up costs. Burdensome taxes have hit individuals and businesses alike driving good paying jobs elsewhere. By not allowing free market principles, California is setting the stage for one of the largest in the United States, a perpetual massive homeless crisis.

Confession: Busted in College (or “The Empty Bottle Caper”)